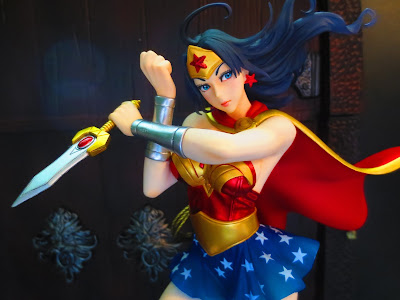 On a recent trip to Nashville, TN I was able to visit one of my favorite comic shops, Comic City Too! I went with  a friend who has a pull box there. While we were browsing they were even recording an episode of the Geeks of the Square Table podcast! Anyways, as a big fan of Kotobukiya's Bishoujo line I saw this Armored Wonder Woman figure at a regular retail price and I just knew I had to have her. I already own the first Wonder Woman release but I figures I'd wait and see if this one dropped in price a bit. Well, it doesn't seem like she's going to drop much and since other figures are starting to skyrocket I figured I should grab her while I had the chance. Ready for a closer look? Then join me after the break... 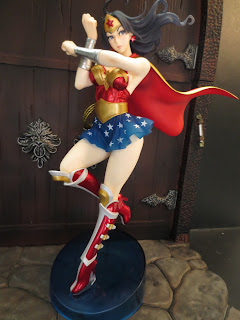 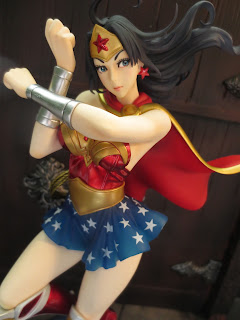 
*Kotobukiya always does beautiful work, particularly in this line. Princess Diana manages to look both gorgeous and tough in this sculpt. I love how Kotobukiya uses a mixture of PVC and ABS plastics to capture flowing details like Wonder Woman's hair, her cape, and her skirt. The skirt is even cast in a blue plastic that is somewhat translucent at the bottom, giving it a very light and fabric-like appearance. The breastplate also is well sculpted and really looks like it's made of a light yet durable metal. The pose they've chosen of Wonder Woman flying while crossing her bracelets to deflect some oncoming danger is really nice and looks great on the shelf. 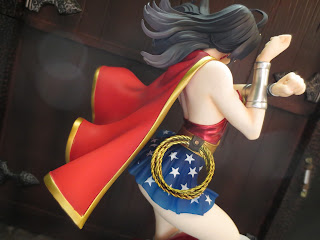 *The paintwork is beautiful. There's not a brushstroke out of place, as is typical with Kotobukiya on this line. 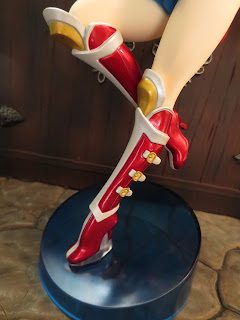 * Wonder Woman's boots are really well done. They're bright, shiny, and look like they'd offer some decent protection. They kind of remind me of Iron Man for some reason. 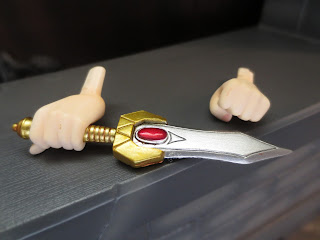 * One of my favorite thing about the this line is that from time to time there are some swappable parts which allow you to change up the statue a bit. Wonder Woman comes with two separate left hands: One clutching a dagger and one balled up into a fist. The hands swap easily and add a fun extra that many statues just don't have. 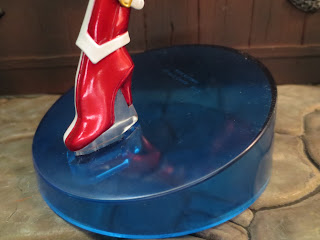 *My only complaint about this figure is the stand. It's a bit dull compared to many of the previous stands in this line. The figure also doesn't really attach to the stand. There's a clear plastic peg on the bottom of Wonder Woman's foot that simply rests in the base. She's not going to tip over or anything but I'm not sure why Kotobukiya didn't make the connection more solid. It just seems odd. 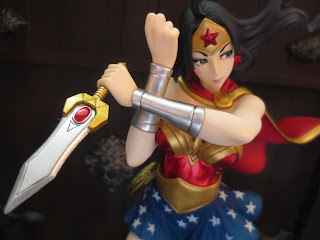 If you're looking for the best statues of the powerful women of the DC Universe, Kotobukiya has them. I love these and I'm anxiously looking forward to the upcoming Zatanna, Raven, and Black Canary. They're beautiful, durable, and fun! Armored Wonder Woman is another hit in the line and, whether you missed out on the first version or not, she's a worthwhile addition. I'm giving her a Great and a 1/2 with the only thing keeping her from the highest marks is the bland base. Otherwise, this is an impressive and wonderful depiction of Princess Diana of Themyscira!

While I own quite a few of these, the only other one I've reviewed on here is Batwoman.

I've reviewed a few other Wonder Woman items, however, including: