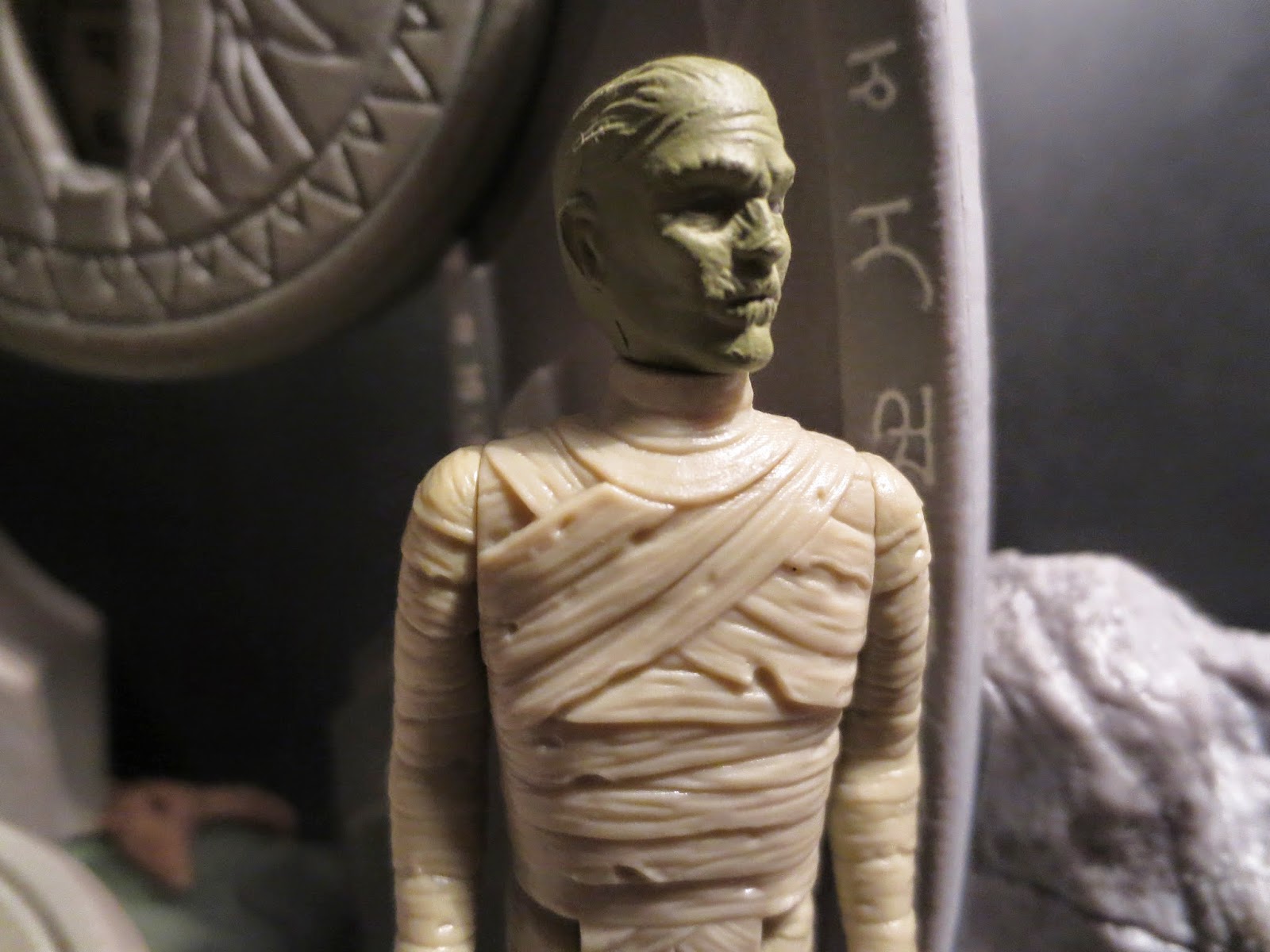 This is it! The first action figure review of the 2014 Halloween season! Isn't it exciting? I can almost smell the smell of a candle burning in a pumpkin! I can almost hear the sound of a serial killer hiding behind a tombstone in some abandoned graveyard that I have no business being in! I can almost feel the weird, vinyl-like material of an old, cheap Halloween costume as I put it on! It's Halloween Halloween Halloween! Since the best Halloweens often seem to be the ones from our youth, I've decided to review the Mummy from Funko's new Universal Monsters nostalgia driven ReAction toyline. The ReAction figures strive to capture the charm of the vintage 3 3/4 action figures of the late 1970s and early 1980s and definitely should remind many fans of Remco's vintage Universal Monsters inspired toyline. The Mummy is based off of the classic 1932 horror film featuring Boris Karloff as the titular mummy, Imhotep. Yeah, he only appears like this in the film for a few minutes, but it's definitely the look most people remember. Ready for a look at a spooky fun figure to kick off your Halloween? Then join me after the break.... 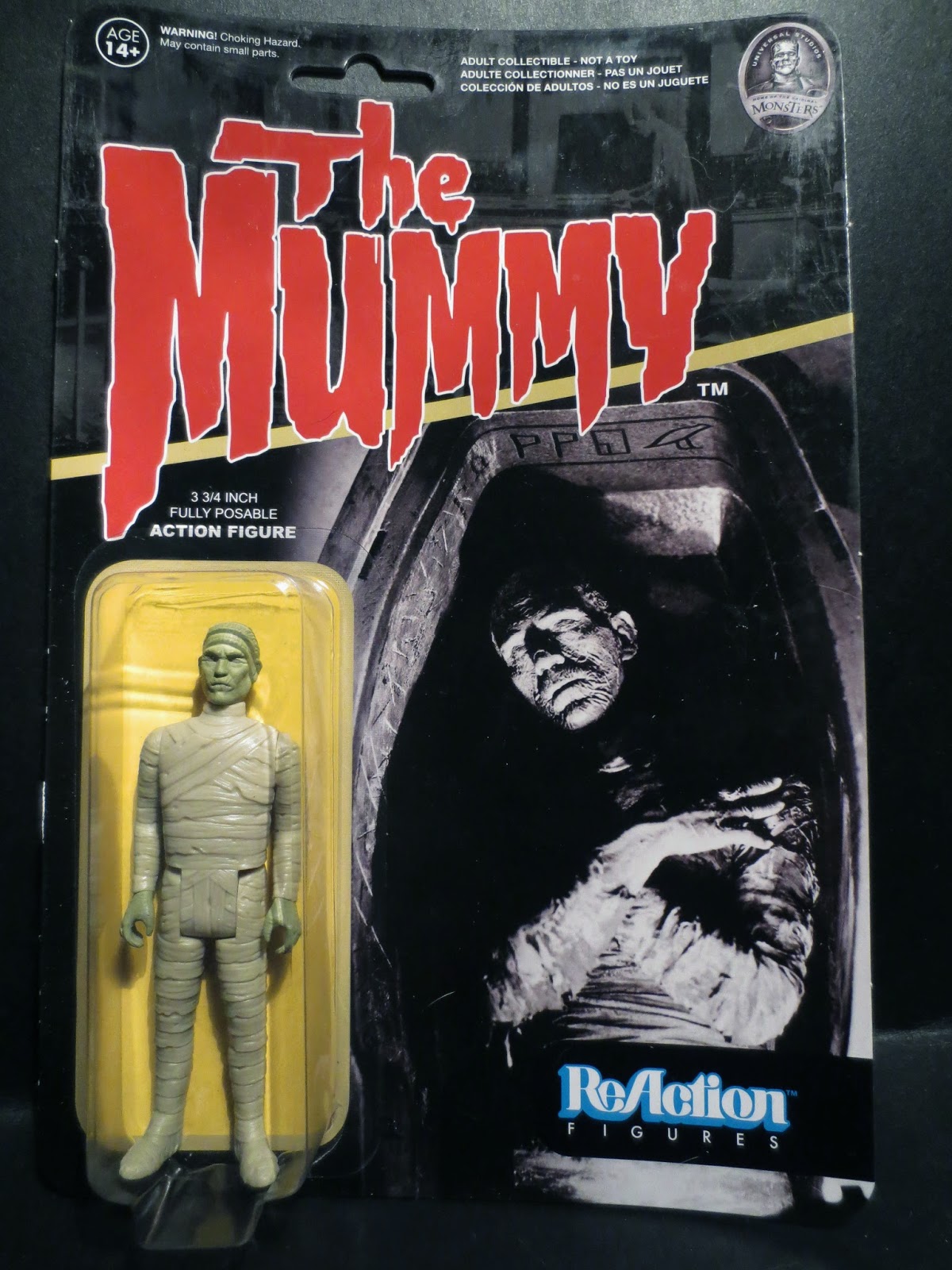 We're starting to see a good number of these retro-inspired action figures hitting the market and I have to say that I'm really enjoying them. I definitely think the Mummy is one of the best that I've seen. He measures in right at 3 3/4 inches tall and has the classic neutral stance that defined this style of action figure that was made famous by Kenner's Star Wars toyline. Obviously these figures are meant to overwhelm you with nostalgia rather than overwhelming you with detail, articulation, and high quality paintwork, and I think the Mummy manages to capture the aesthetic. Of the various ReAction and Bif Bang Pow! figures I own, I think the Mummy looks and feels the most like a vintage release. And that card! Awesome! I'm not much of a packaging guy but I've been carefully cutting these blister cards so I can pop the figures in and out at will. I love the black and white film still of Karloff in his sarcophagus, the yellow blister backing print, and the blood red "The Mummy" emblazoned on the packaging. Interestingly, this guy is supposed to be from series 2 of this line, yet I haven't even heard of anyone from series 1 being released. 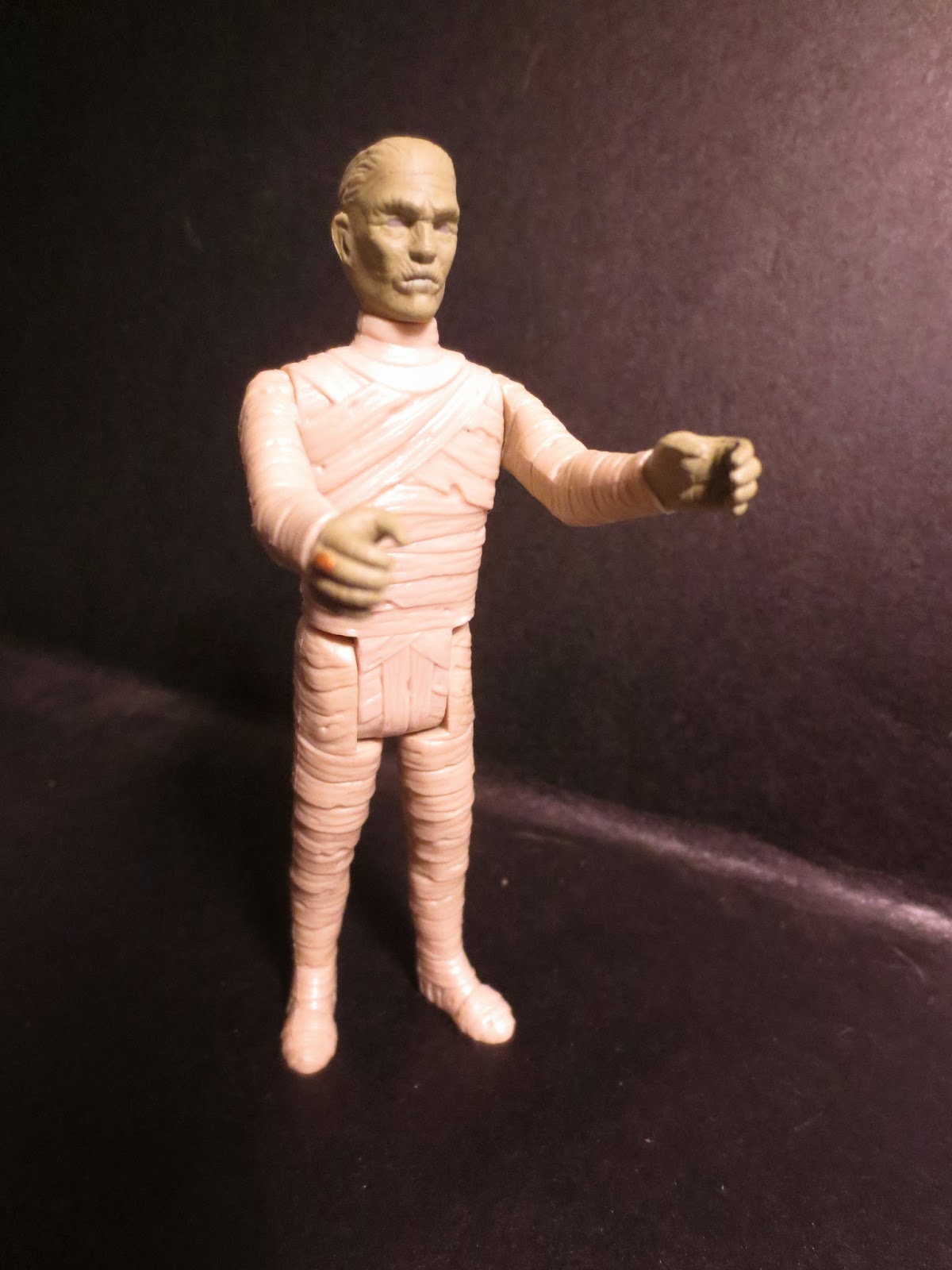 Articulation is simple on the Mummy: swivel hips, swivel shoulders, and a swivel neck. The figures of this era weren't know for their athletic prowess, so the Mummy here can only keep such exciting poses such as standing, standing with one arm out, standing with two arms out, and sitting in a Landspeeder with his head looking to the right. He feels very sturdy; much sturdier than other Funko ReAction releases. I will mention one oddity, though: This figure has no holes in his feet for a stand. I'm kind of surprised that Funko skipped this little detail. 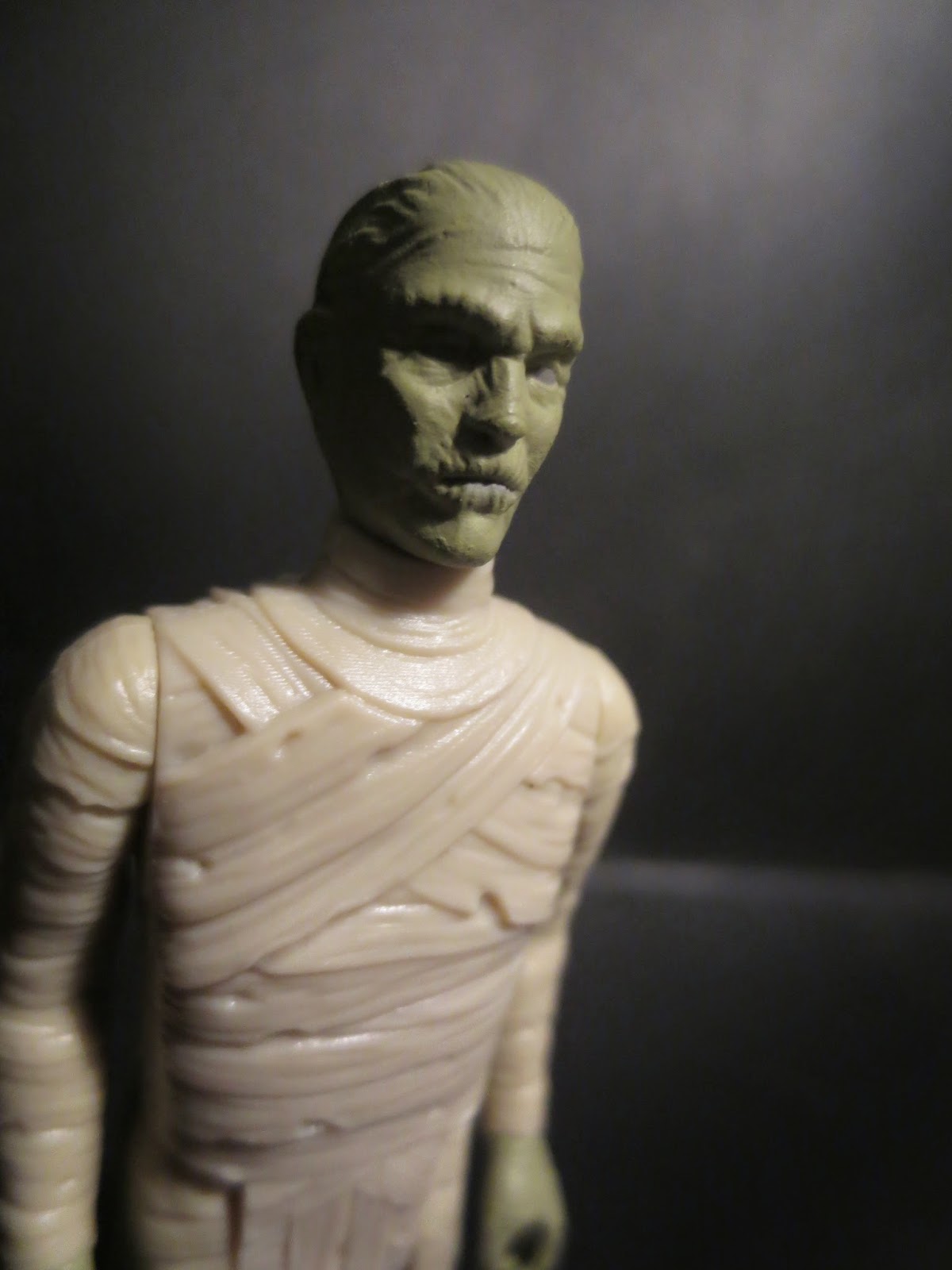 I love the sculpt. The trick with these vintage releases is that you want to produce a cool toy but you also want it to look like an older toy. I think Funko succeeded here. There is some nice, crisp sculpting here, but nothing that I think would have been too out of the ordinary for the time period. The head sculpt is great as it captures the wilted, mummified appearance of Karloff's face as Imhotep. Maybe it is a little too good for a "vintage" toy, but I like it and feel that it is definitively Karloff's Imhotep. The body is handled well as it is completely (except for the hands) covered in bandages. They look good and have some nice little tears in them. Check out his right hand: Don't you love the little ring detail? Very classy stuff. 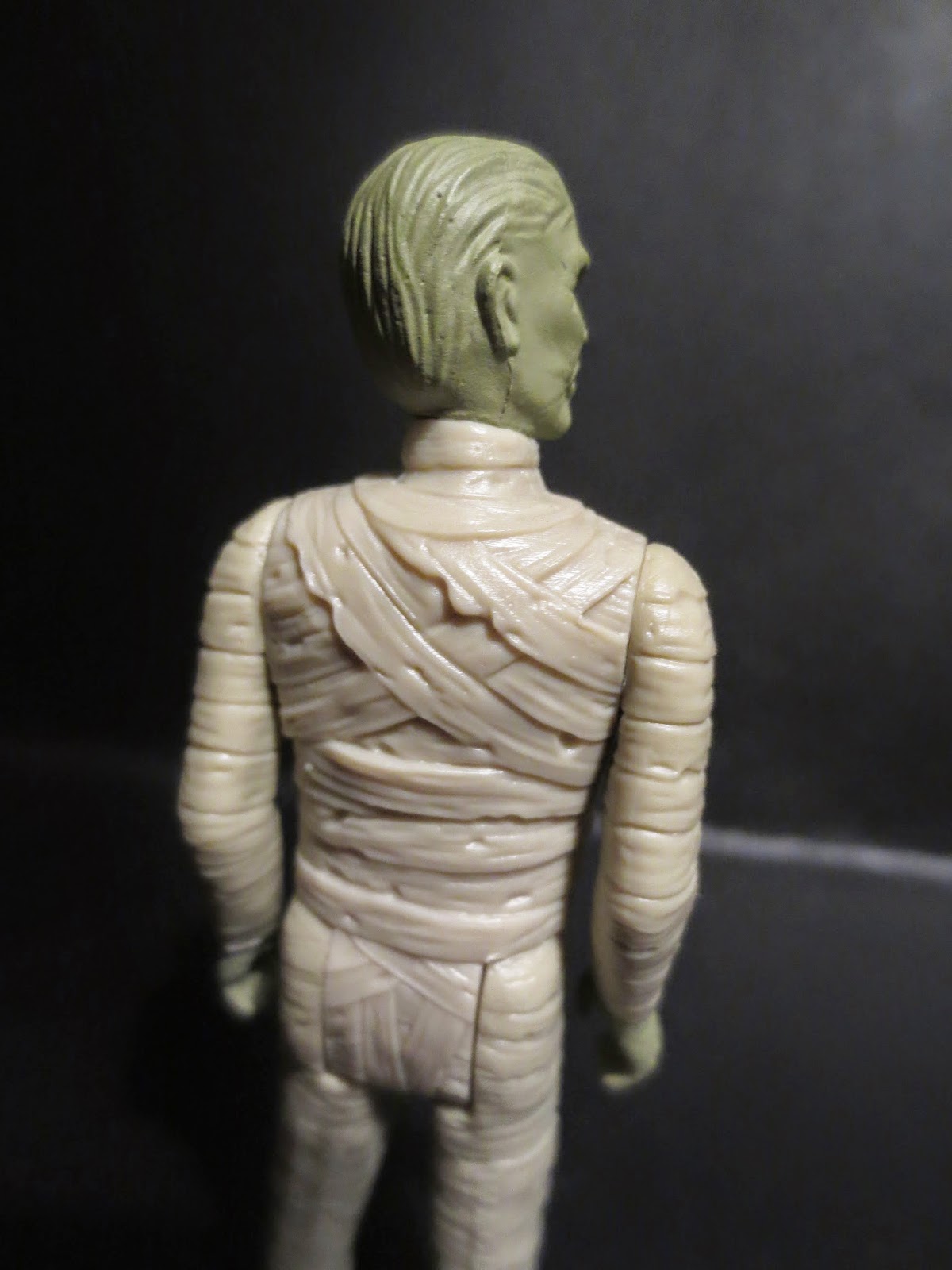 Perhaps this guy looks so vintage because he has such little paint applied to him. One of the hallmarks of the vintage Kenner figures was that most of a character was molded in a single color with paint applications to add necessary details. Imhotep didn't need much extra detail so, with the exception of his ring and his hands, the figure is molded in solid colors. A bone whitish tan for the body and a grayish green for the head. He looks perfect, though. 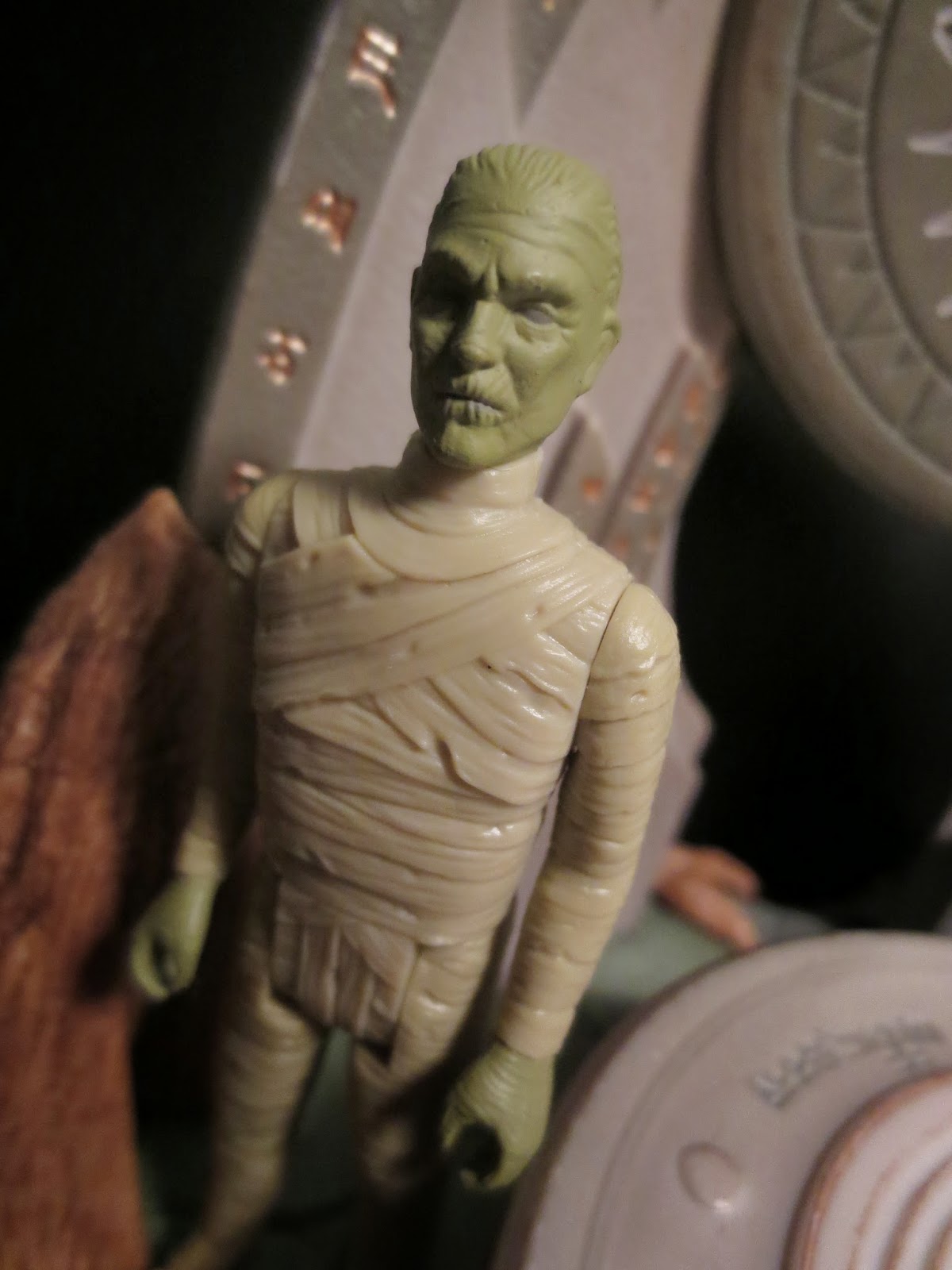 While Funko has been including accessories with most of their ReAction figures, they seem to have decided to skip the accessories on the Universal Monsters line. I guess it is true that most of these guys didn't use anything, but something cool like the scroll of Thoth or something would have been neat. 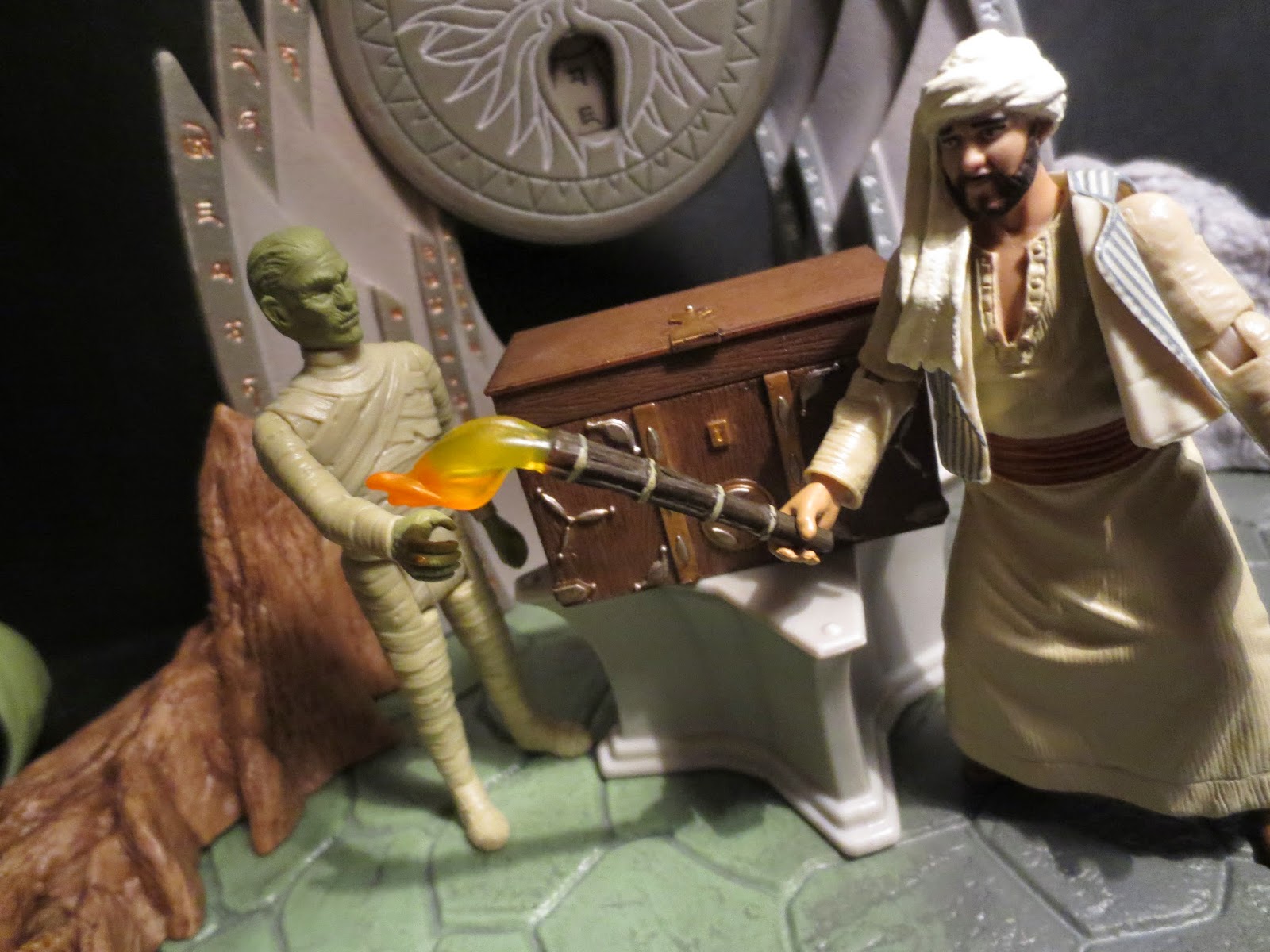 As you might be able to tell, I'm really enjoying these vintage inspired action figures. I'm loving Funko's offerings, I've picked up all of Bif Bang Pow's Twilight Zone line, and I'm anxiously awaiting Warpo Toys' Legends of Cthulthu. There's something about this particular style of toy that I find particularly appealing and the Mummy here is no exception. While the Mummy is not my favorite of the Universal Monsters, he always seems to make for an interesting action figure (despite the fact that he does so little). A great sculpt and a very vintage feel makes this guy a winner in my book. While I'll always lament the lack of an accessories, I'll gladly give this guy a Great rating. Whether you're a Universal Monsters fan, a Boris Karloff fan, or simply need more mummies to populate your Indiana Jones Well of the Souls playset, you should be pretty pleased with how this guy turned out. 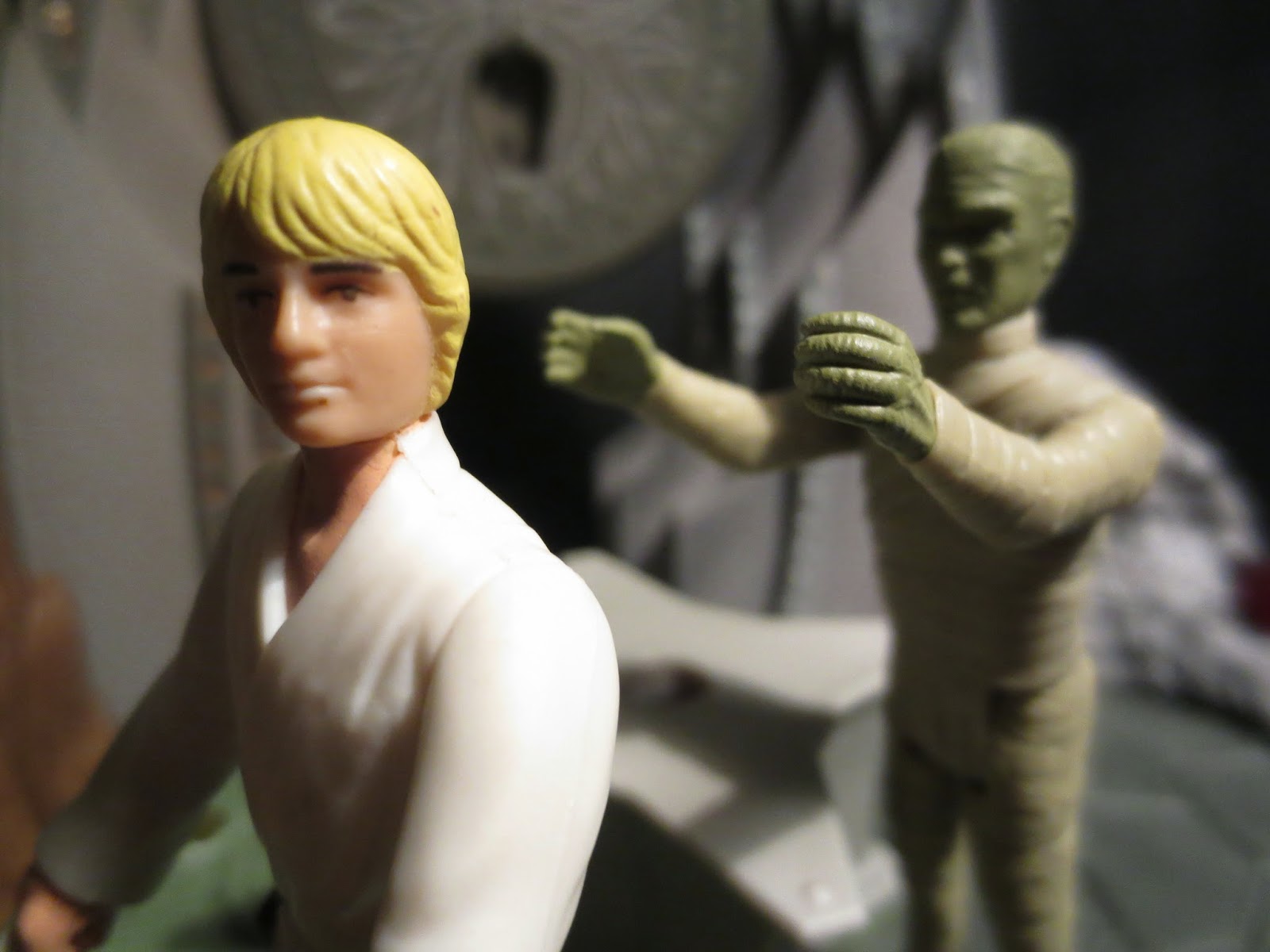