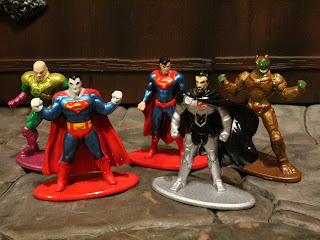 I just wrapped up reviewing series 4 of the DC Nano Metalfigs a week or two ago and now I'm checking out the two 5-packs released alongside of series 4. First up is the subject of today's review, Pack A. Pack A is focused on Superman and his villains and it includes one new sculpt, two repaints, and two repacks. It's easily the less exciting of the two 5-packs due to the presence of so many reused sculpts but there is still quite a bit of coolness here, especially considering these things only cost about $5 each. Want to check out this new set? Then join me after the break... 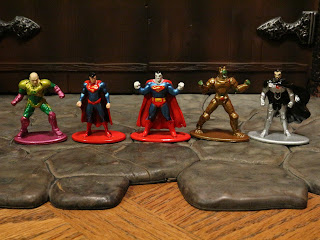 Height: Around 1 3/4ths inches each 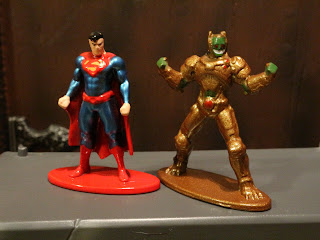 * First up, let's check out the two repacks: Superman (DC15) and the Parademon (DC24). Jada Toys calls this Superman the New 52 look and he has so far appeared as a single packed figure in series 2, in the 20 pack, and now here as well. The New 52 inspired Parademon (DC24) first appeared in the series 1 5-pack A and was also included in the 20 pack. Both of these are exactly the same as the previous releases, thus my daughter now has them as part of her collection. 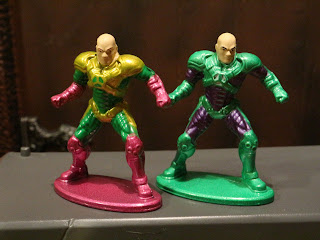 On the left is the new Lex Luthor (DC99) while Lex Luthor (DC27) is on the right. This new Luthor is the same sculpt but the paintcolors of his battle armor definitely remind me quite a bit of the Super Powers version of the character. 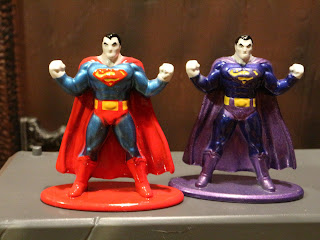 The new Bizarro (DC95) is on the left in brighter, more traditional looking Superman colors while the previous Bizarro (DC41) is on the right. Again, this figure is a simple palette swap. I really like the brighter Bizarro, although the darker costume better differentiates him from Superman. 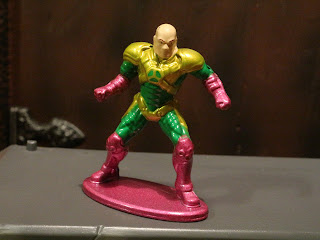 * Here's a pic of Lex by himself. The green and purple, while loud, just go together so well. I love 1980s DC comics and this color scheme definitely makes me think of the era. I will say that the paintwork on the headsculpt isn't as clean on this figure as on the previous Lex Luthor, however. 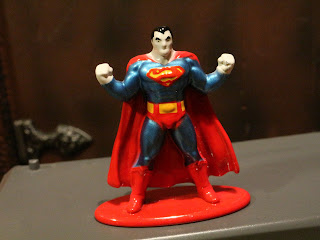 * Here's a shot of Bizarro by himself. The brighter colors of the classically colored suit definitely make me think more of the classic Silver Age look of the character than of any modern appearances. 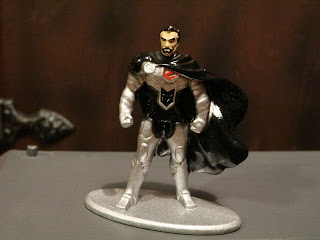 * It's time for a look at the sole "new" figure in the series: General Zod! General Zod is clad in some very cool looking armor and features a flowing black cape. He's pretty cool and fits in well as a Rebirth version of the character. I really like him and it's nice to add another DC villain (who isn't a Batman villain) to the mix. 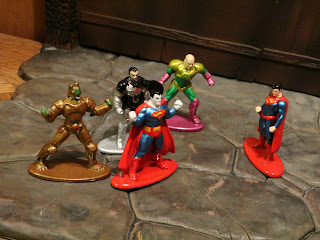 This set is...OK? I really like General Zod and the two repaints are OK, but it's a little frustrating to get two older repacks that don't even feature new paintjobs. The Parademon kind of makes sense, as he is an armybuilder, but couldn't Superman have featured a new paintjob? Black and silver suit perhaps? Considering the price of these the presence of duplicates isn't a killer but it does kill some excitement, especially when there are so many great characters we still don't have. This is a Good and a 1/2 set although if you don't own any of these figures, the score could probably be higher. I like the idea of themed sets and I'd love to see something similar with the Metal Men, Wonder Woman, the Suicide Squad, or the Flash.

If you're looking for more Parademons I have reviewed the Nano Metalfigs Parademon from 5-Pack A and DC Comics Multiverse: Justice League Parademon.

If you're looking for more of Lex Luthor, I've also looked at the BvS Multiverse Lex Luthor and the Nano Metalfigs Lex Luthor DC27 from Series 1's Pack B.

For more Bizarro reviews check out the DC Nano Metalfigs Bizarro DC41 from the series 3 5-pack B and the series 3 10-Pack Collector's Set.

This is the first General Zod figure I've reviewed on the site!