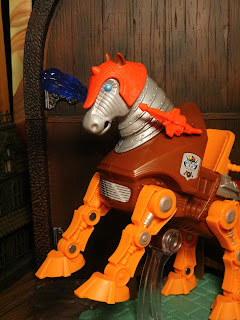 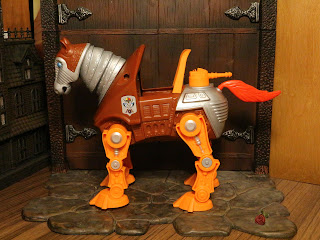 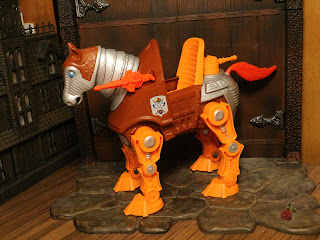 The Positives:
* At a glance the MOTU Origins Stalker looks quite similar to the vintage toy. The colors are a bit brighter, though, and the legs have silver paint highlights to bring out the details on them. Stridor has always been a really cool looking toy and the Origins version captures everything cool about a robotic horse armed with laser cannons and subtly improves upon it. 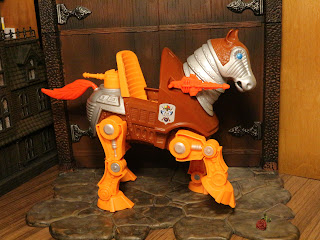 * He's also quite nicely articulated. The legs each have three points of articulation, the tail swivels, and the neck has a swivel and a balljoint with a balljointed head. Pair that with the rotating cannons and Stridor is far more mobile than the originl toy. 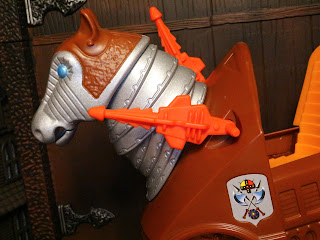 * The two laser cannons that sit aside Stridor's neck are removable. They also rotate up and down so they can be used for blasting straight ahead of Stridor or for fending off aerial attacks. They're simple but quite neat looking. Sturdy, too. 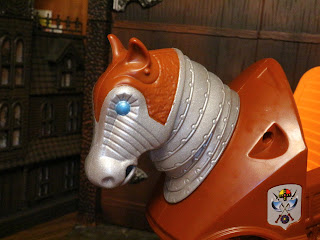 * I love Stridor's blue mechanical eye as it just adds some welcome personality. Do you think Stridor has a personality or is he just a mechanical horse? I've always wondered myself. Sometimes Stridor has been portrayed as one of many with multiple Stridors but I've always preferred him to be unique. Well, more unique, perhaps, as Night Stalker exists. Anyways, his headsculpt is really cool with only minor updates from the vintage toy. 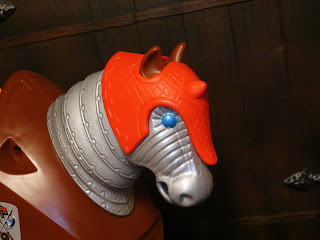 * The vintage Stridor wore a red battle helmet and that's what we get here. It's pretty cool looking and adds a nice splash of color to the front of the toy.  The plastic is definitely thicker than on the vintage toy but otherwise it basically looks the same. 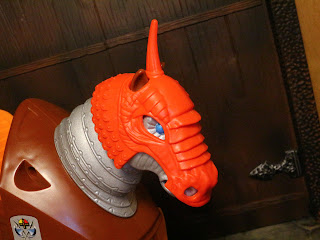 * Check out this crazy alternate red helmet that is far more elaborate than the standard helm. Where did this come from? When Matttel released the Masters of the Universe Classics Night Stalker they included a new helmet for him. When Super7 released the MOTUC Stridor, they also included the Night Stalker helmet, but in red. That's what this one is based on. It's a cool alternate look for Stridor. I think I'm still going pure vintage but this gets me pumped that Night Stalker ought to be coming soon, right? 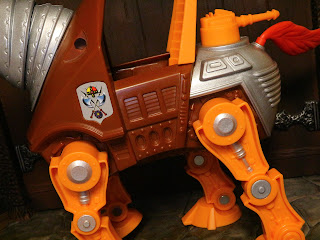 * There's plenty of sculpted detail on the side and a pretty solid recreation of the vintage shield sticker, too. 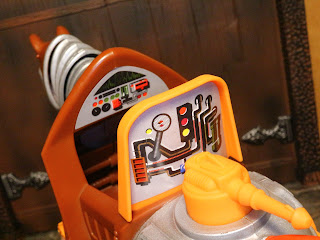 * The control panel and the back of the seat are also stickers, just like the vintage toy. They're colorful and feel very retro and classic. 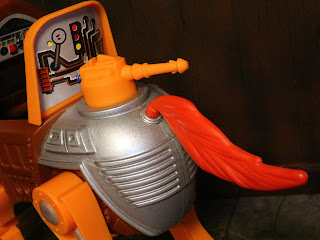 * Stridor's tail gun rotates to fend off any Evil Warriors pursuing him. I've always thought this little gun turret was a cool detail. 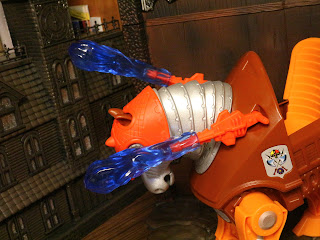 * So get this: How do you make Stridor's laser cannons even cooler? Use these included energy effects! They're translucent blue pieces that simply fit over the barrels of the guns. They're a bit heavy but they look cool and are a really fun extra. 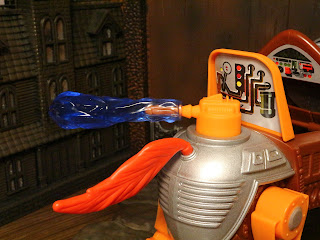 * There's a third laser blast included for the turret on the back, too. 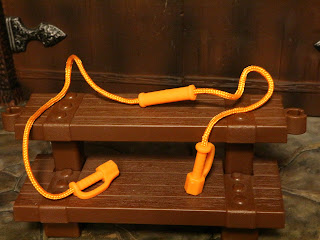 * Here's another new included item for Stridor: Some reins! The plastic handles are on a piece of rope and the bit is plastic and moves freely on the rope. What a neat idea. 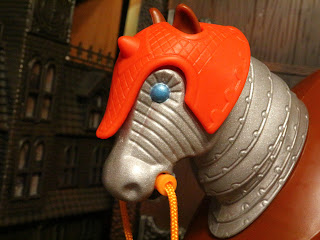 * Stridor has a spring hinged mouth so he can snugly hold the bit. Giddy up! 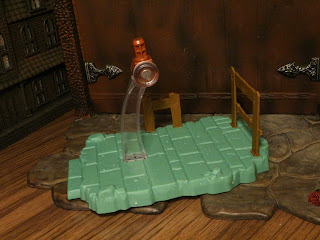 * Mattel has included cool bases with a number of vehicles and Stridor also comes with one. The green color is similar to Castle Grayskull and the package does state that it attaches to Grayskull. really, you can slide one end of the base under the playset but there is no actual attachment point. This piece has a stand for Stridor and two small fences, almost like a little place to tie the robotic steed up. It's a pretty neat extra. 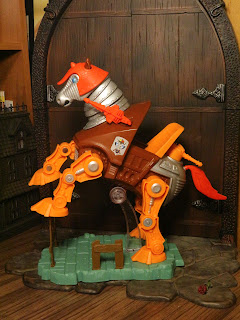 * Even better, the stand plugs into a port on Stridor's belly and helps you to pose him with his front legs up in the air. How cool is that? Whoever has been working on the vehicles in MOTU Origins really is doing a great job. 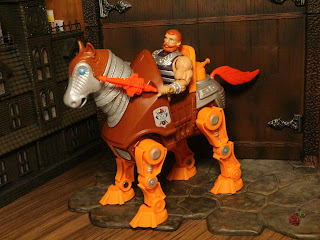 The Negatives:
* My one negative with Stridor is that the figures tend to sit a little lower in it than I'd prefer. They don't look like they're riding Stridor so much as sitting down inside a cockpit. With a little futzing around you can make it work better, but it's still a bit of a negative. 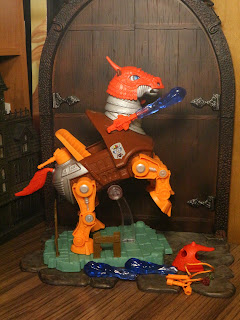 I've loved all of the vehicles released in this series so far but Stridor might be the best. He looks fantastic and really improves on the vintage toy (more paint apps, more articulation) while also adding in some cool new features. The addition of the laser blast effects, an additional helmet, and the reins really just make this a more fun toy. Oh, and the base. Whether you just want somewhere for Stridor to chill or you
want to pose him up on his hind legs, this is a cool extra. Mattel really is doing a great job with Masters of the Universe Origins and I'm excited to see what they've got in store next. This is an Epic Stridor figure and it makes me hopeful for Night Stalker. Oh, and Rio Blast. I usually pair Fisto with Stridor but a Rio Blast would be really cool, too.
If you're a fan of Stridor make sure to check out my reviews of the vintage Stridor, the Masters of the Universe Classics Stridor from Super7, and the Eternia Minis Fisto and Stridor set.
For more Masters of the Universe Origins reviews check out the following:
Anti-Eternia He-Man
Battle Armor He-Man
Battle Armor Skeletor
Battle Cat
Battlefield Warriors
Beast Man
Beast Man (Lords of Power)
Buzz-Off
"Buzz Saw" Hordak
Castle Grayskull
Clamp Champ
Clawful
Eternian Goddess
The Evil Horde
Evil-Lyn
Evil-Lyn (200x)
Faker
Fisto
Flying Fists He-Man
He-Man
He-Man and Prince Adam 2-Pack
Hordak
Jitsu
Land Shark
Lords of Power
Man-At-Arms
Man-E-Faces
Maniacal Mimics
Mer-Man
Mer-Man (Lords of Power)
Mosquitor
Mysteries of Grayskull
Ninjor
Orko
Panthor
Panthor (Flocked)
Prince Adam & Sky Sled
Ram Man
Rise of Evil
Roboto
Scare Glow
She-Ra
She-Ra (PowerCon Exclusive)
Skeletor
Sorceress
Stinkor
Stratos
Stratos (Minicomic)
Sun-Man (Mattel Creations)
Teela
Trap Jaw
Tri-Klops
Tri-Klops ("The Terror of Tri-Klops!")
Webstor
Wind Raider
Zodac
Posted by Barbecue17 at 4/17/2022