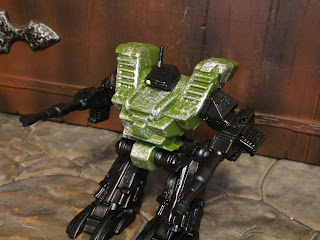 More Final Faction? Yup. Today I'm checking out the P-131, an automated drone that seems to be a bit of an army builder for Alpha Team 1. P-131 is packed in the same case with Krepitus and Diabol which is is currently the newest case of figures available. From images I saw I really thought he was going to be quite a bit larger than he is. This little guy is just a hair shy of 3 inches but after watching the first episode of the animated Final Faction cartoon I do believe these guys are supposed to be a bit on the smaller side. The P-131 is a neat drone/mech and it's been fun to see folks customize these. Let's take a look at what you get from Dollar Tree for a buck and a quarter after the break... 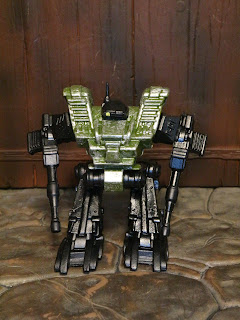 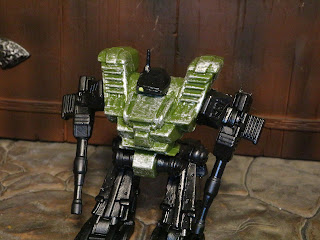 The Positives:
* The P-131 is a heavily armored, bipedal mech designed solely to add lots of extra firepower to Alpha Team 1. The color scheme is simple (black limbs with a green body) but it works for a mech. The front of the figure does have a neat drybrush effect to give the mech some additional ruggedness. 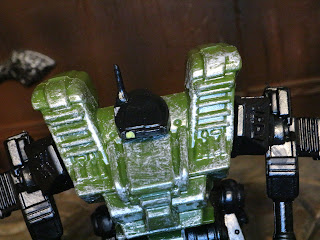 * Here's a close-up of the P-131's head. It's quite basic: Just a simple dome with an antenna and a green lens. It looks fine, though, and the simplicity doesn't really take anything away from the overall design. 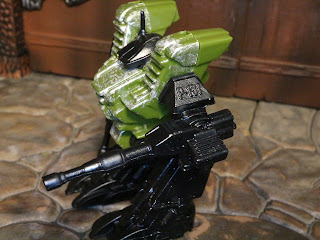 * The P-131 has massive cannons in place of arms. They're nicely sculpted and look like they'll do some serious damage to the Kharn. I also like how the left shoulder has "P-131" on it. That's a pretty cool detail. 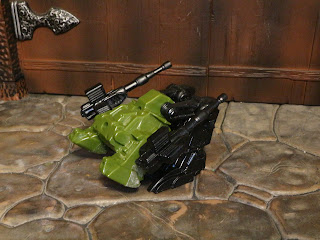 * The P-131 has movable hips and shoulders like the rest of the figures (the head just kind of wobbles) but it's actually kind of neat because you can fold these guys up like the Battle Droids in Episode 1 or use them as a turret that the heroes can utilize in combat. They're more versatile than you'd think. 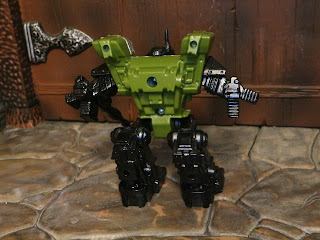 The Negatives:
*Considering there is so little paintwork on this guy it would have been really nice to have the paint applications from the front continue onto the back of the P-131's body. 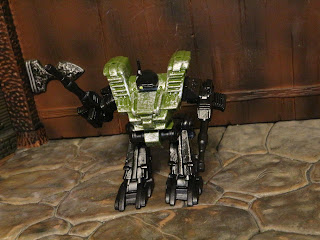 The P-131 could have used a few more paint applications and maybe an accessory or two but he's a fun figure. Not one of the standouts in the line or anything but still a decent army builder for Alpha Team 1. He's a Good and a 1/2 figure that really ought to be a good custom base for collectors working on lots of various projects. He's fine on his own, though, too. Since he's a mech you could also use him with a variety of toylines. He reminds me of a Z-Bot or something. Robots are always fun and this one isn't a bad pickup at all.
This is the first figure of P-131 I've reviewed. For more Final Faction review check out the following:
Amari
Arrow ATV
Arrow ATV Weapons & Armor
Churro & FD-0
Crawler
Decimator
Diabol
Huntra
Krepitus
Riptide
Ruck
Spc. Scope
Torn
Posted by Barbecue17 at 4/12/2022