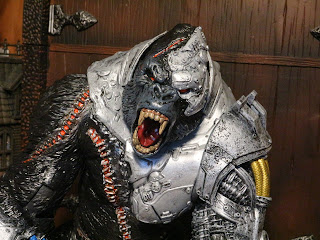 There's another Spawn Megafig out on shelves right now and he's based on a classic Spawn character: Cy-Gor! Cy-Gor first appeared in the vintage Spawn toyline as a character made up solely to be an action figure. He was shortly after introduced into the comic in issue #38, however, and he's popped up from time to time ever since. This version is the resurrected Cy-Gor from the more recent comics and he's a hefty guy. I've only ever owned the Cy-Gor v2 figure which I picked up in dollar bin somewhere to use as Kriegaffe in my Hellboy collection. This guy is definitely chilling with the rest of my Spawn figures, however. I initially ordered him from Amazon using some rewards points but my order was lost by FedEx somewhere in Louisville, KY, so I ended up getting him at GameStop using some my monthly membership coupon when the Spawn figures were on sale a week or two ago. Shop around for a deal. Ready for some massive monkey mayhem? Then join me after the break... 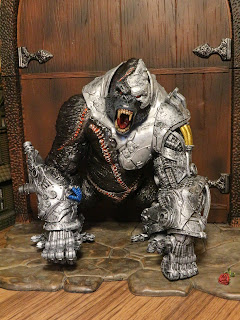 The Positives:
* As a Megafig Cy-Gor is noticeably larger than your average Spawn figure. While he's only an inch or two taller than your average figure he's way bulkier with a massive body and massive arms. He's not as heavy as the Violator but he's still a pretty sizeable figure. 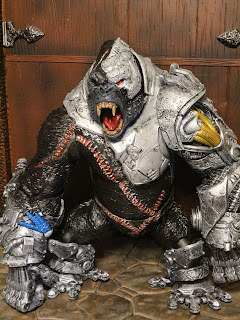 * The sculpt is quite impressive, especially on the metal parts of Cy-Gor's body. Cy-Gor died at some point in the comics and was brought back to life by Al Simmons, so this version is covered with even more gashes and stitches than previous versions. The monkey fur sculpt certainly isn't bad at all but it's the robotic elements that definitely make Cy-Gor most impressive. There's a lot of technological details on the limps and body and some really nice paint effects to bring out all of the details. 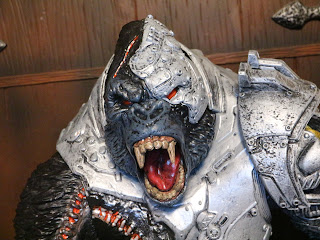 * Cy-Gor is pretty terrifying. About 2/3s of his head is gorilla while the other 1/3 is cybernetic. He's like a primate Terminator. His standard eye is red as is his robotic eye. He's way scarier than anything from the movie Congo or the accompanying Kenner toyline, that's for sure. 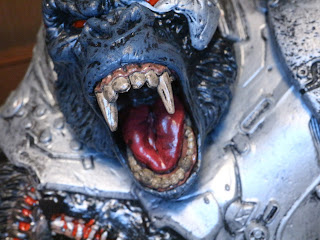 * Take a look at his teeth. Those are some sharp and fierce looking choppers! His inner mouth and tongue also look great with some wet looking paint to give him a more realistic appearance. 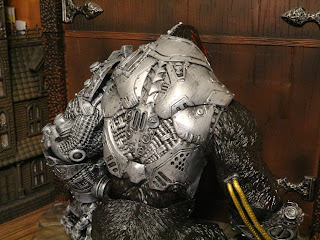 * Flip Cy-Gor around and you can see how much crazy detail is sculpted into the armor of his back. It's pretty crazy! I love the excessive amount of detail on this guy. 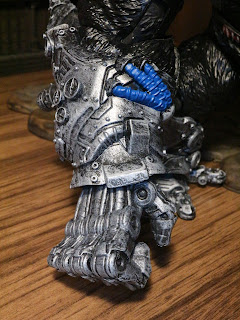 * Here's a look at Cy-Gor's right arm. Fantastic sculpting and a great paint effect to highlight all of the metal bits and bobs really makes for an impressive looking toy. His hands are posed so he can walk on his knuckles, too. 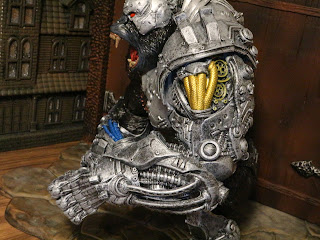 * And here's the left arm. Wow. I'm really impressed by how crazy the interior gears and wires are on this guy. It's got a nice steampunk vibe going on. 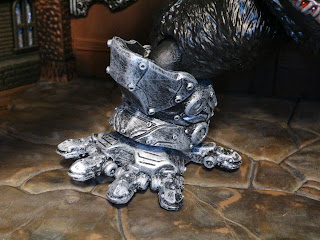 * Cy-Gor's feet are pretty cool, too. I dig the paint job on all of the metallic parts on the figure. 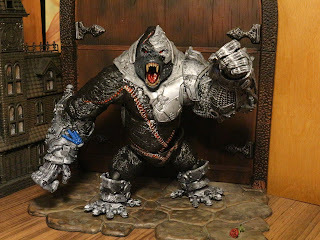 * The articulation is overall good on Cy-Gor. He's not super poseable or anything due to his chunkier build and his hunched over posture. Still, he's sturdy and well made and with some effort you'll get some fun poses out of him. 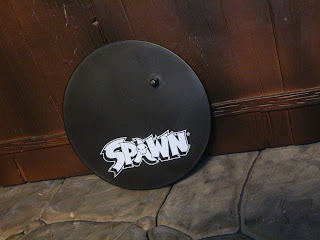 * McFarlane has been including a simple plastic disk stand with all of the Spawn figures. I like the consistency and it's a pretty decent stand, so good for them.
The Negatives:
* I do wish they'd include a larger stand with the Megafigs, though. Seriously, this stand does absolutely nothing for Cy-Gor. It's about the same size as his feet. 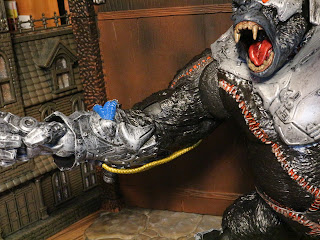 * When I opened my Cy-Gor his right elbow was stuck. A little heat resolved that but I quickly realized that due to the flexible cord on his right elbow there really isn't much motion possible as the wire stops things. I love the flexible cables but the placement of this one needed to be thought out a bit more. 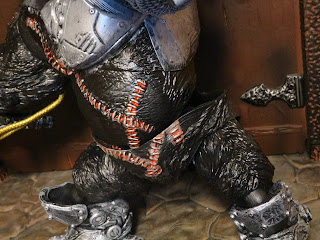 * Take a look at Cy-Gor's waist. In order to hide the massive balljoint here McFarlane went with a rubbery overlay that covers the joint and attempts to match sculpting of the stitches on Cy-Gor's torso with those on his waist. When you start moving it around, though, it just looks off. It's a weird design that draws more attention to the problem that it's trying to hide. 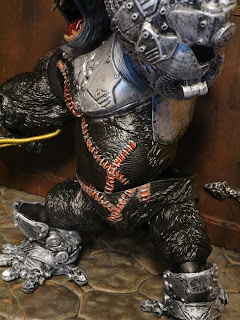 * Furthermore, when you really start trying to pose Cy-Gor you end up with open slits in the figure where the waist overlay lifts up. it's a rally awkward design. It's always been clear that McFarlane Toys and the Toddfather himself definitely prefer unbroken sculpts and form over function, but this attempt to "hide" the articulation just seems like more of a noticeable eyesore than having done a regular balljointed waist would have been. 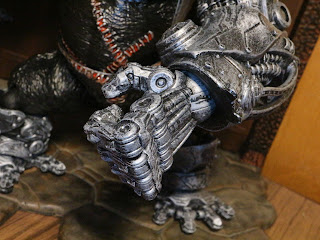 * Considering how large Cy-Gor's hands are and how they fingers are already sculpted with hinges, wouldn't it have been cool to give this big gorilla some articulated fingers? 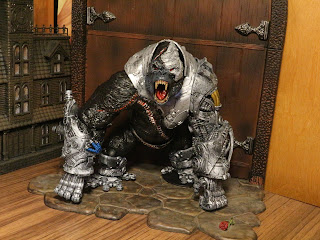 Cy-Gor looks really, really cool. Seriously, he's an impressive looking figure with a great sculpt and some excellent paint applications. Stick him on your shelf and he's going to catch everyone's eye who checks out your collection. When you start posing him, however, a lot of flaws show up. He really is meant for one or two poses and the weird waist overlay just didn't turn out so well. I like him but his flaws bring him down. He's a Good and a 1/2 figure that really needed a little more time on the design table. And articulated fingers. Those would have worked amazingly well here.
This is the first figure of Cy-Gor I've ever reviewed. For more Spawn figures check out the following:
The Clown
Mandarin Spawn Deluxe
She-Spawn
Soul Crusher
The Violator (Bloody)
Posted by Barbecue17 at 4/16/2022