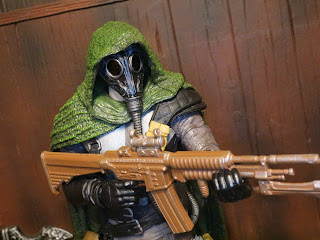 I've really been enjoying McFarlane Toy's revival of the classic Spawn toyline. While I'm most familiar with Spawn from the earliest days of the toyline and the movie era, I've almost always paid attention to the toyline and it's been exciting to see it enter into the modern era of highly articulated action figures. While I am reading my way through the Spawn Compendiums (I'm currently around issue #78 or #79) and certainly have characters I enjoy, not knowing who a character is doesn't keep me away from picking up a cool figure. Heck, I'm pretty sure that well over half of the figures from the nearly 30 year old toyline were developed just for the toyline. Today I'm checking out Soul Collector, a figure from the second series of releases who is a newer character in the Spawn universe (first appeared in 2017). Soul Crusher seems to be a major player in Spawn again so the timing of the figure is excellent. He's a cool looking, gas-mask clad warrior with a post-apocalyptic vibe. I dig him and I'd probably dress like him every day of the week if it were socially acceptable. Let's check out Soul Crusher after the break and see if he's worth your time and money... 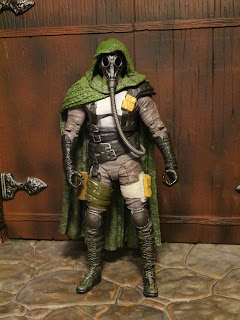 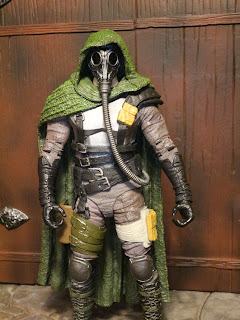 The Positives:
* McFarlane Toys prides itself on using completely unique sculpts as often as possible and Soul Crusher is indeed a completely unique looking guy. He looks accurate to the highly stylized artwork of the character and is clad in a grey body suit, lots of pieces of body armor, and a long green hooded cloak. The sculpt is overall quite sharp and there's some great textured details on the different parts of Soul Crusher's armor. He's sporting some yellow pouches on his hip and shoulder which add a nice splash of color to the figure. 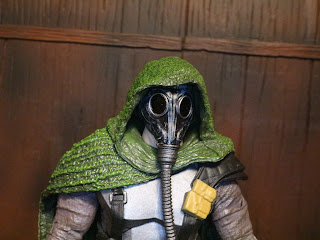 * Most of Soul Crusher's portrait is hidden beneath his hood and pretty much everything other than some skin on his neck is hidden underneath a gas mask. The gas mask looks great with a nice mixture of blacks and silvers to bring out the details. The cord running from the gas mask to the tank on Soul Crusher's back is flexible and the hood is attached to the top of the head, so the movement is definitely not hindered as much as you might think. Some of the art of Soul Crusher makes the lenses look quite bright, almost glowing white, but the basic shaded lenses were probably the better choice here. 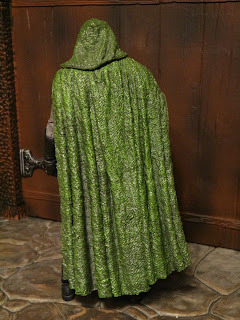 * Soul Crusher's cloak is really cool. It's made a somewhat pliable plastic and, while cloth would have made for a more dynamic toy, this still looks pretty cool. Unless you're trying to put Soul Crusher in a kneeling pose the cloak works just fine. It also has a fantastic texture to it which makes it look like it's made of some very thick, rough material. The paint work is excellent, too, further enhancing the texture and giving it a more lived in appearance. 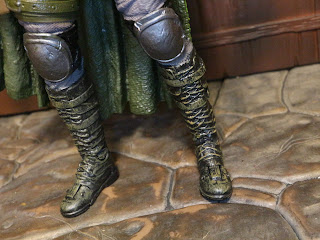 * Soul Crusher's combat boots have to be a pain in the neck to lace up, huh? Look at all of those laces! Who knows what this guy has been walking through considering the weird yellowish effects on his footwear. Sludge? Mud? Muck? You'd better take these off before you come inside, mister! 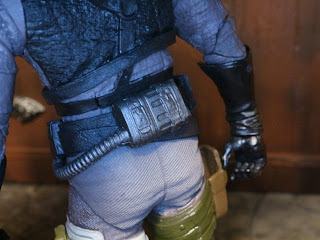 * Soul Crusher's gas mask has a filtration unit that he wears on his lower back. It's not removable but it is connected to the Gas Mask via a flexible tube and it has lots of little sculpted details on it. It's pretty nifty and reminds me of something from McFarlane's Metal Gear Solid line that I loved so much when they were first released. 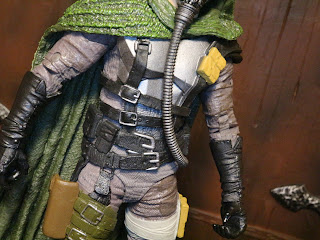 * Let's tale a closer look ay Soul Crusher's harness. See all of those straps? They're actually designed as separate pieces so that no matter how you move him, the straps still look connected and aligned. They have pieces of plastic that hang over to look like they're truly connected. It looks awesome and it an impressive feat of action figure engineering. 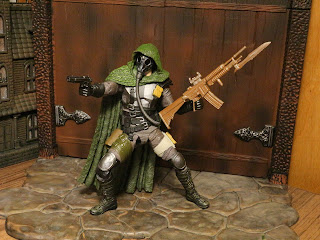 * The articulation is really good on Soul Crusher. Other than the limitations imposed by the presence of his cloak and his hood, everything else works great. Soul Crusher is even sporting articulated toes and the lateral hinged shoulders (aka butterfly joints). He's solid and durable which is something that I love about this line. I remember back when McFarlane figures were somewhat fragile but these guys are now as durable as anything else on the market. He looks great in multiple poses wielding one or both of his weapons and just oozes coolness doing so. 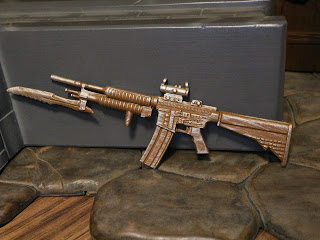 * Soul Crusher's assault rifle looks like a pretty standard AR styled rifle with a large magazine, a smaller scope, and a serrated bayonet. It's a great looking accessory that, interestingly, has been given a silver and brownish paint scheme. It looks great and contrasts nicely with the figure despite being an unusual color choice. Is this supposed to be rusty and weathered? Still, I love the design and the detail here. 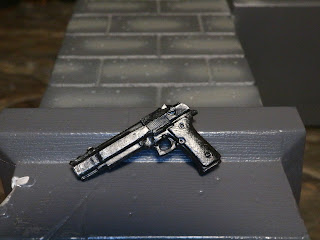 * The pistol looks inspired by a .50 calibre Desert Eagle and it's black with a dry brushed, gun metal effect. I love the weapons in the new Spawn series and I'm glad McFarlane is getting to design some cool firearm accessories here since they can't in the DC line due to a Warner Bros. policy that went into effect sometime last year. Hopefully McFarlane toys will follow through with Todd's suggestion to release some cool accessory packs for Spawn figures that DC Multiverse collectors can "borrow." 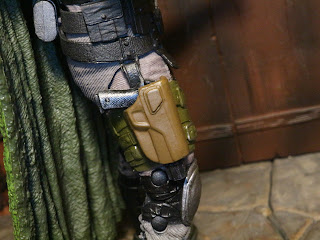 * Soul Crusher's pistol fits nicely into the molded holster on his right hip. 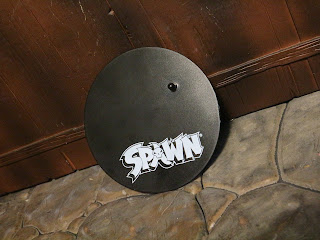 * McFarlane has been including a simple plastic disk stand with all of the Spawn figures. I like the consistency and it's a pretty decent stand, so good for them. 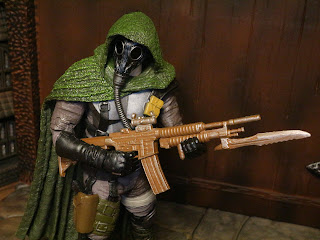 The Negatives:
* Soul Crusher looks great wielding his firearms but the one thing he can't do well is do a standard rifle shooting pose with the stock again his shoulder. It turns out that this isn't because of the figure's articulation bit because the stock is oversized here. The stock should have been a bit shorter or perhaps the entire rifle just scaled down a little bit. 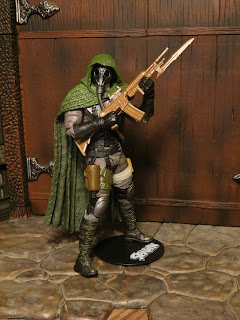 Soul Crusher is an incredibly cool figure. He has an amazing design that's all completely original so far, fantastic articulation, and lots of neat little details like the way his harness straps "move" to not break up their appearance when he's articulated or the cool design on his cloak. His weapons are really well done, too. The only fault, really, is that the stock on the rifle is just a bit too large. Despite not knowing much about the character yet, Soul Crusher feels like a figure that could grow more popular as he comes to the attention of more collectors. He's just so incredibly cool looking. I really like what McFarlane Toys is doing with the Spawn line as it's fun to get figures with such unique sculpts and designs at pretty reasonable price points. Soul Crusher is an Epic figure and he looks like he could be a villain (or hero) to fight against anyone on your toy shelf.
This is the first figure of Soul Crusher I've reviewed. For more Spawn reviews check out the following:
The Clown
Mandarin Spawn Deluxe
She-Spawn
The Violator (Bloody)
Posted by Barbecue17 at 4/09/2022