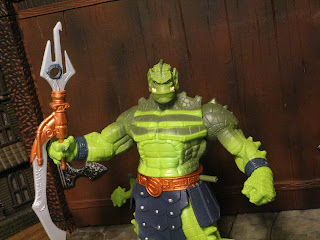 Masters of the Universe day is this week (Thursday, April 28th) so I've got a few special reviews for this week, one of which is a look back at this Whiplash figure from 2003. Whiplash was released twice in the line, both in series 5 in Summer of 2003 and again in series 6 in Fall of 2003 in the packaging featuring the Snake Men logo. There's also a "chase" variant with a silver belt buckle detail, but this isn't it. Whiplash originally appeared in the vintage 1984 series of MOTU figure and showed up quite often in later Filmation episode. That and his appearances in the Mike Young Productions series definitely helped net him a figure rather than just a Staction but I'm not sure why he was released twice. I seem to remember him being pretty easy to find compared to many of the other Evil Warriors. Let's take a look at this burly Caligar who's built like a tank after the break... 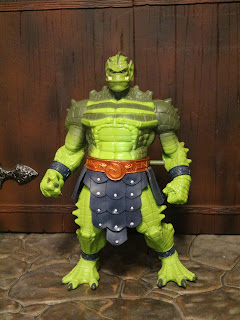 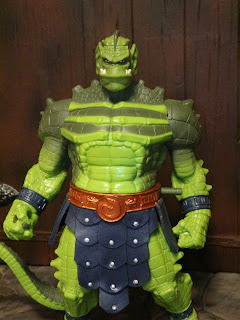 The Positives:
* Whiplash does look pretty cool. He's never been one of my favorites or anything but I do really love how muscular and armored this version of the character looks. He looks like a spiking wrecking ball come to life. The Caligars definitely seem to be inspired by reptiles like crocodiles and alligators and you can see the scales covering his body. They look great with lots of detail in his musculature. He doesn't just look like a humanoid with some reptilian features here: He's definitely a full on reptile-like beast. The mixture of greens really highlights the sculpt, too. 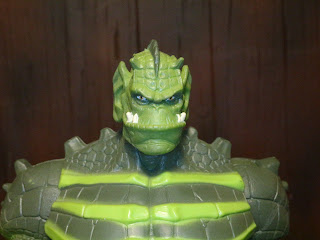 * I love Whiplash's headsculpt. It's definitely an improvement over the vintage toy with a much meaner and more animalistic appearance. He's still got the funky teeth but he just looks more fearsome. His eyes are pretty intense, too. 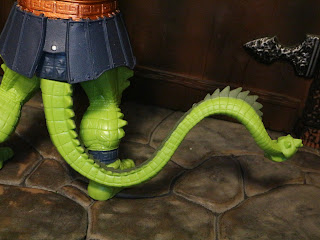 * Whiplash's tail is a separate piece that attaches to his backside. It's part of his action feature. Push the lever on his side and it swivels back and forth to knock down any heroes that get in his way. The detail on the tail is fun (I love the spiked end and the spines) and the tail whip is more inspired than some of the other action features in the 200x line. Whiplash is an evil, tail-thrashing warrior after all. 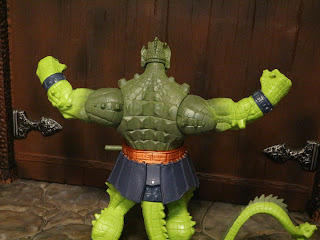 * Take a look at Whiplash's crocodile like back. I dig it! It's pretty awesome looking. 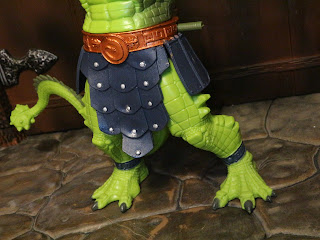 * Whiplash's belt is really cool as are his scaly legs. The majority of the characters in this line received 100% unique sculpts and the Four Horsemen really got the chance to play around and have fun with the designs. His belt buckle can be found with a silver detail in the middle which was a chase variant. Not overly exciting or anything but they are out there. 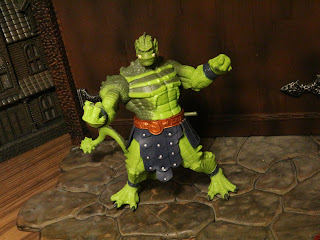 * The 200x MOTU figures aren't super articulated but that was kind of the standard at the time for most lines (Marvel Legends was just getting stared and was a bit of an outlier so far as crazy articulation on mass market toys). They're somewhat pre-posedfigures but the presence of the H-hinged hips, swivel/ hinge shoulders, and the wrist swivels definitely make them still quite fun to play with. They're sturdy as heck, too, and a blast to mess around with. 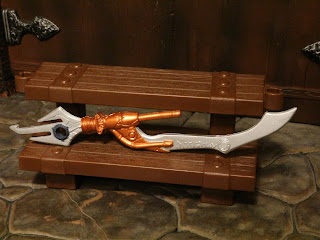 * Rather than just coming with a simple spear (the vintage Whiplash reused the Castle Grayskull weapons rack spear in orange) the Four Horsemen created a massive monstrosity of a melee weapon for this version of Torrant Krazut (that's his real name!). It's pretty wild with a spear like tip and a massive blade extending from what looks like a handguard. The menacing but seemingly impractical nature of it kind of reminds me of the Klingon bat'leth from Star Trek. 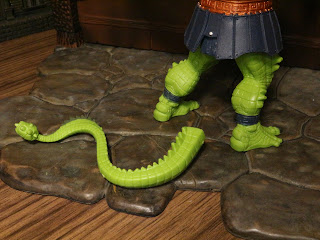 The Negatives:
* My biggest negative with this figure is that Whiplash's tail will fly off pretty quickly when using his action feature. Heck, sometimes it just falls off because you looked at it the wrong way. I wish it snapped in more securely. 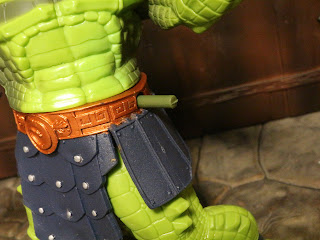 * The other negative about this figure is the very visible post on his left side. This is what causes his tail to lash. It's not on the back or disguised all that well. It's just there; always visible. 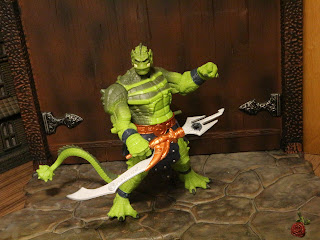 Whiplash definitely isn't one of my absolute favorites in the 2002 Masters of the Universe line but he's still a very solid figure. Literally: The dude is like a small mountain. He's also well done and an improvement on the design of the vintage Whiplash. For being a character who shows up pretty often in MOTU stuff (Filmation, MYP, Revelation) Whiplash never seems like one of the core Evil Warriors. He's just there most of the time. This guy is a pretty Great figure, though, and is really fun and looks fantastic on display. The character selection in this line is a bit limited without the Stactions mixed in so the Evil Warriors need all the help they can get.
If you're down with Whiplash check out my reviews of the MOTU Revelation Eternia Minis Whiplash and Metallic Whiplash, the POP! Whiplash #82, and the Super7 M.U.S.C.L.E. Whiplash minis from the #1 Masters of the Universe set (Green) and the flesh colored series 1 Whiplash.
For more Masters of the Universe 200x figures check out the following:
He-Man (Comic-Con Exclusive)
Heroes Vs. Villains Gift Pack #1
Keldor
Man-At-Arms
Mekaneck
Moss Man
Ram Man
Snake Teela
Trap Jaw
Posted by Barbecue17 at 4/26/2022