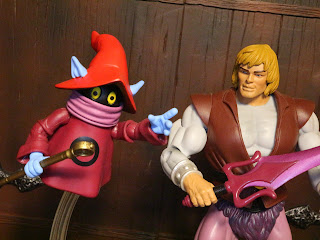 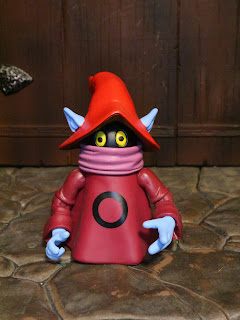 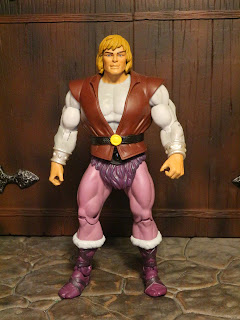 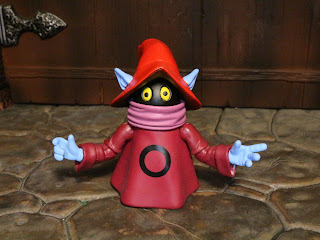 * Orko looks incredible, doesn't he? While today there are multiple "Filmation accurate" Orko figures, back in 2010 we really only had the vintage figure and the 200x Orko. The colors, the size, and the sculpt really do capture Orko's appearance in the Filmation series perfectly. It's a clean, sculpt with just enough detail that he fits in with the rest of the MOTUC line perfectly. 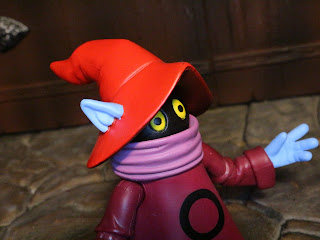 * Orko's scarf is a separate piece (it's removable if you pop off his head) but the rest of his head is one piece, including his hat. To capture Orko's....well, just his visible, floating eyes his head is round, smooth, and black with the eyes sculpted on and painted. It's pretty convincing, in a cartoon way. His hat and ears look pretty true to the cartoon as well. There were some of the Orko figures that had really sloppy paint on the ears but I think mine came out OK. 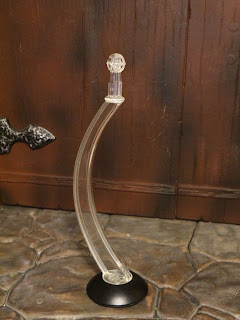 * Orko came with a flight stand to allow him to hover at a more equal level with the rest of the figures in the line. It's a simple translucent plastic arced stand with a separate flared bottom. Orko pops on to the balljoint on top via a socket underneath his robes. 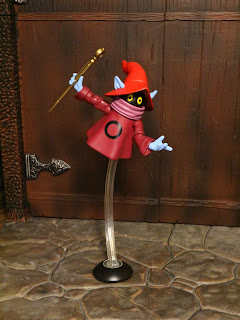 * While he's a smaller figure based on an animated design with no legs, Orko does have some solid articulation. His arms move expressively and you can use the balljointed head and stand to add a lot of character to his poses. He's a tremendously fun figure. 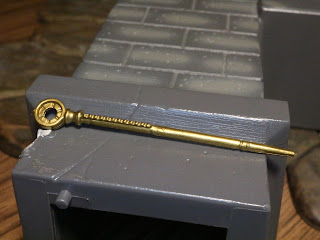 * Orko comes with a few extras as well. First up is a magic wand. It's similar to the wand from the 200x Orko with a loop on the end and ridges on the shaft that are reminiscent of the ripcord from the vintage Orko toy (he had a ripcord that you pulled through the figure, causing Orko to spin about in circles). 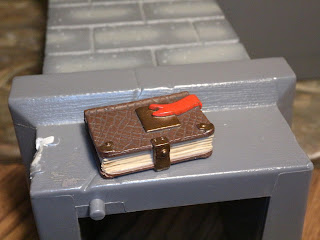 * Orko's other true accessory is a Trollan spell book. This is a neat little sculpted book with excellent paintwork and some neat sculpted details. The little extras like the bookmark, the leather cover, and diary-like the lock really add a lot of personality. I've always kept mine displayed inside the MOTUC castle Grayskull near the throne. The SDCC version of Orko's spell book had the SDCC "eye" logo printed on the back. 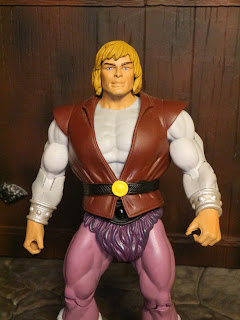 * Orko's next accessory is.... Prince Adam? Haha. Yeah, Mattel did market Prince Adam as an accessory in this set. It was kind of funny, though I know there were some folks who collected carded figures that wanted a single packaged Prince Adam. I've always loved Prince Adam and this is a pretty nice version of the character. Like the vintage Prince Adam, this one is largely a reuse of the MOTUC He-Man with a new vest piece. The colors are excellent here. They're still bright and noticeable but they're subdued a bit to fit in with the MOTUC aesthetic as an update of the vintage toy. There are lots of cool little extras like the wash on his purple trunks and his silver bracers that enhance the detail of the costume, nicely upgrading the vintage design. 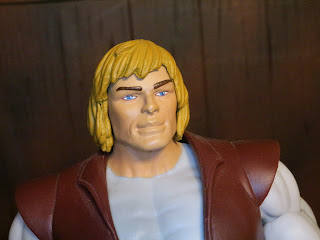 * The Four Horsemen sculpted a new headsculpt for this release. The Prince Adam headsculpt is much friendlier looking with a bit of a smile and a more relaxed facial expression. 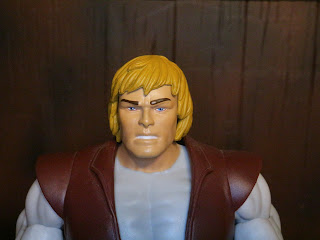 * Of course, they also included a classic MOTUC He-Man headsculpt for the vintage purists who wanted Adam and He-Man to have the exact same expression. The heads swap easily, which was a great feature of MOTUC. 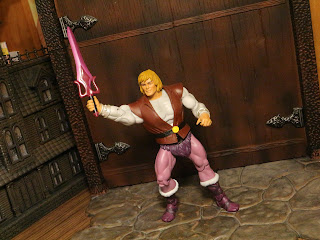 * While the figure is over 10 years old at this point and might be a little outdated by today's standards, these are still solid, durable toys with great movement. I love the blend of sculpt and articulation on these figures and I still don't think any MOTU line has yet surpassed these in the melding of form and function. I do have hopes for Masterverse, though. We'll see how things develop. 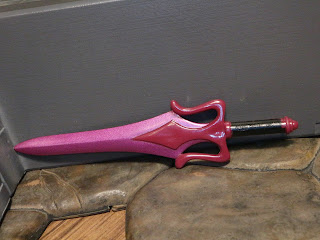 * Prince Adam comes with the Power Sword in magenta. Actually, the sword has three colors: Back for the handle, maroon for the hilt and quillons, and metallic purple for the blade. It looks great and is a fantastic take on the Power Sword. 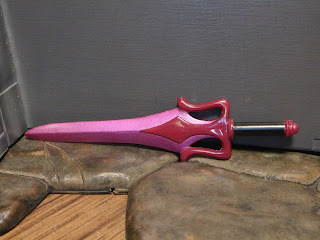 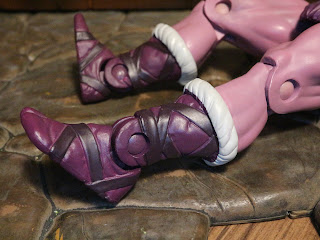 * Many of the early MOTUC figures suffered from some loose joints and while Prince Adam overall has very tight articulation, his left ankle is definitely a bit loose. 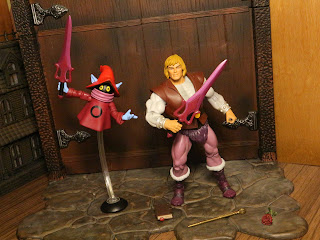 I really like this set and it's still one of my favorites from Masters of the Universe Classics (which is my favorite toyline of all time). Getting Orko and Prince Adam as a pair was a pretty cool idea and both figures turned out to be really nice. At the time the price was only $5 higher than a standard figure, too, so you were getting two figures (or maybe one and 3 /4s?) for the price of one. These two guys are just one of the many reasons I love MOTU and this set gets an Epic rating from me. It's fun and really offered up something that, at the time, was quite new.
I've reviewed so many toys  of Prince Adam/ He-Man that he has his own review archive. Check out Fabulous Secret Powers for more He-Man reviews than anywhere else on the web.