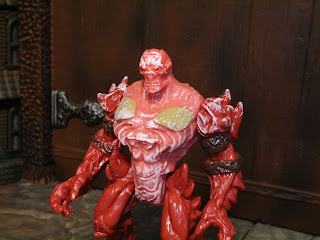 The Kharn warriors from series 1 were all army builders and generic troops but the newest series contains  two named warriors for the Kharn. Today I'm checking out the current highest ranking member of the Kharn in toy form, Diabol. General Diabol is one of the generals of Queen Malara, who apparently is the ruler of the Kharn. Interesting. I wonder if we'll get a figure of her eventually? There's a comic book for Final Faction now and the first issue is available at Dollar General. I haven't found one yet but I'm curious to learn more of the story. Diabol is a pretty fearsome looking figure and stands out from his troops with his bright red exoskeleton. Ready to check out one of the baddies that Alpha Team 1 has to face? Then join me after the break... 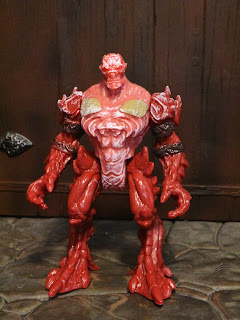 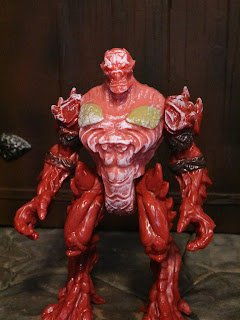 The Positives:
* General Diabol is pretty large. He's built kind of like the Grunt or Brutes from series 1 but he's noticeably taller. Diabol is a big dude and his blood red exo-skeleton helps him to stand out from the blues and purples of the other Kharn figures in the line. There's a lot of detail here making for a rather interesting looking figure. According to his bio Diabol likes to wear the bones of his enemies as armor, so you're going to see some crazy stuff scattered about on him.  I definitely think it's safe to say those "chest pads" he has on aren't his bones. Interestingly, his torso kind of looks like a giant skull itself, doesn't it? 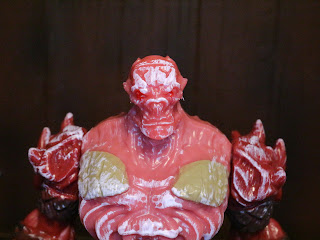 * There's some interesting white dry brushing on Diabol's face which gives him a really unsettling appearance and helps bring out more of the detail in the sculpt. The Alpha Team 1 figures have cool accessories and such but the sculpts on the Kharn are legitimately very good. Those red eyes just add to the menace. I can just imagine this dude as a videogame boss, seeing him multiple times in cutscenes until you finally face him at the end. He reminds me of a mixture of General RAAM from Gears of War and some baddie from Doom. 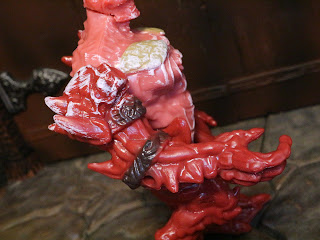 *General Diabol doesn't come with any accessories but his arms, covered with spikey protrusions, look like they could cause some serious damage on their own. The sculpt on this guy reminds me of a mid 90s McFarlane figure. That's a positive, by the way. He also has some ports on his forearms so presumably some accessory set will be released for him in the future. 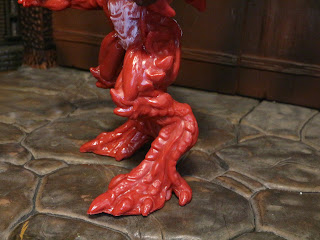 * He's also standing on some very creepy legs and feet. 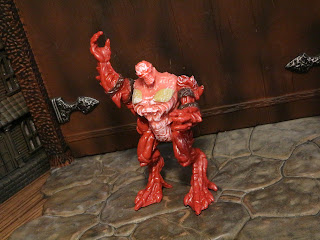 * Like most other figures in this line, Diabol is sporting 5 points of articulation. He's fairly sturdy and does what you'd expect. He's also larger than the rest of the figures which makes him all the more menacing. 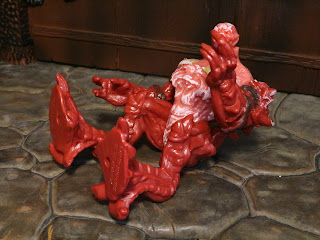 The Negatives:
* The only issue I've had with Diabol is that his legs are a bit loose. Not "he can's stand up loose" but more just a general looser feeling when posing him. He looks find on display but his legs could be firmer. 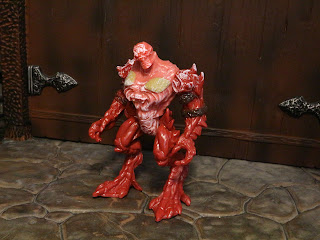 Diabol is a menacing figure and looks great leading the rest of the Kharn in your collection. I do wish he was packaged with an accessory of sorts but with all of the accessory kits available you'll surely find something for him to wield. Since he has those ports on his arms I'm presuming there will eventually be an accessory kit for him as well. He looks fantastic and for an action figure that costs around the price of a candy bar (or less) he's a Great addition to the line. Keep checking back because I have more Final Faction reviews coming soon!
This is the first figure of General Diabol. For more Final Faction reviews check out the following:
Amari
Arrow ATV
Arrow ATV Weapons & Armor
Churro & FD-0
Crawler
Decimator
Riptide
Spc. Scope
Torn
Posted by Barbecue17 at 4/07/2022