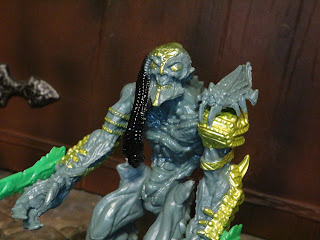 The newest series of Final Faction figures has added two unique personalities to the Kharn forces. I reviewed General Diabol late last week and today I'm looking at Krepitus, a ruthless bounty hunter that tracks down and ties up loose ends for the Kharn. His current target is Torn, a defector of the Kharn who has joined Alpha Team 1. We've got some intrigue going on here now! I like it. Krepitus is a very cool looking character that definitely feels like he's the "cool" bad guy character that everyone is nuts about. Had Final Faction been released in the 1980s or 1990s there would probably be no end to the Krepitus merchandise you could find. Everyone would be posting using screennames like Krepitus69 or something and you'd know at least one person with a Krepitus tattoo. Since he's a new character, though, I guess you can be the first on the block to show off your Krepitus fandom. Let's take a look at Krepitus after the break and see why he's such a cool villian... 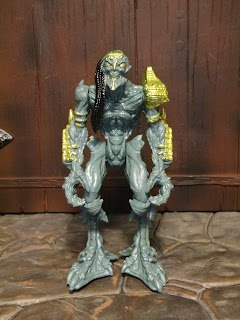 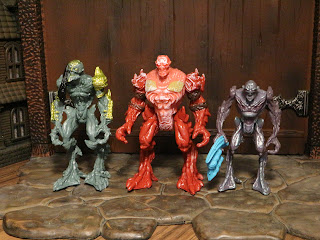 Comparison:
* Just for fun, here's a quick comparison between Krepitus (left), Diabol (middle), and the standard Grunt. The body strudctures are similar but the heights are all over the place, as are the builds. 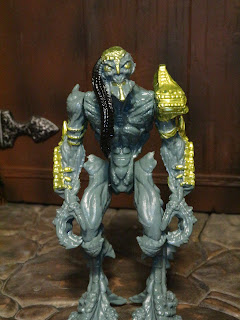 The Positives:
* Krepitus is structurally build like a standard Kharn with satyr-like legs and a very pronounced exo-skeleton. He's molded in a very grayish-green which also helps him stand out. He's taller than the Grunts but shorter than Diabol with a slenderer build. Krepitus is wearing some gold armor on his arms and left shoulder, so he seems to be ready for some serious stuff. 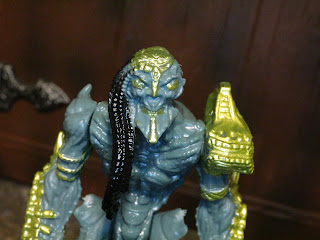 * His face is creepy. It's a bit more skeletal than the other Kharn with gold features and a skullcap of sorts. He's also sporting dreadlocks, which is kind of cool. It makes me think of the Predator for some reason. 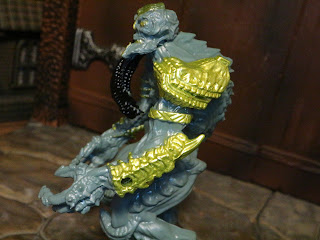 * The armor is really cool on Krepitus. I love how shiny it is and it looks like something he's built from the exo-skeletons of toher creatures. I don't think he just walked into Kharn-Mart and grabbed this off the shelf. 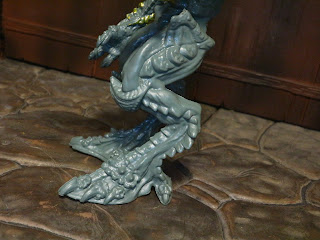 * Here's a close-up of his leg. That's pretty wicked looking for sure. 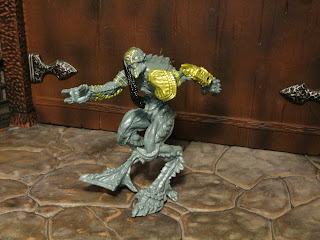 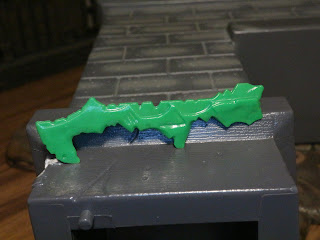 * Krepitus' weapons are listed as blades which he coats in poison. The first blade looks very jagged, like it would be useful for tearing into his enemies or pulling ships and such apart. 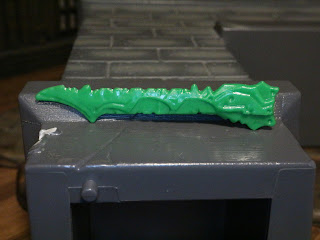 * The second blade looks more like a normal sword. Well, kind of. It definitely is more elaborate with lots of funky details on the blade. Interestingly, when I found my Krepitus and was looking through the ones available for the best paint job I ended up finding one that had two of these blades packed in. The figure is only supposed to come with one but mine coming with two is a QC error that worked in my favor. 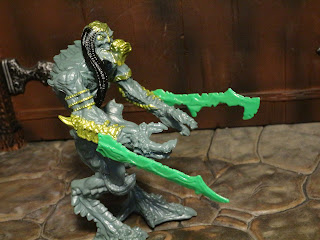 * You can kind of get Kreptius to hold these blades but they're truly intended to pop onto the gold gauntlets on his forearms. Once in place you can swivel them around, just like Torn's blades. 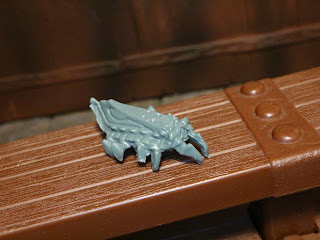 * Krepitus has one other cool little extra: Flea. The packaging calls Flea Krepitus' companion, stating that he helps Krepitus out with scouting and tracking down targets. Is Flea some sort of creature or is it a robot of some sort? It definitely seems very mechanical, but so do a good number of the Kharn. 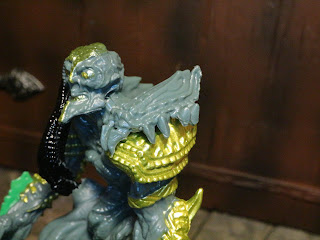 * Flea can attach to Kreptius' shoulder when not in use. How cool! Seriously, I love crazy little details like this. It just makes these toys so much fun. 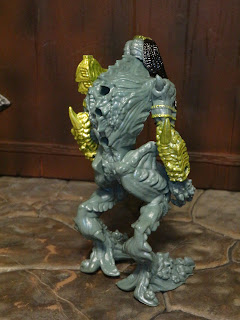 The Negatives:
* Krepitus is covered with so much excellent detail but it's a real shame that his torso and legs don't really have any paint applications. Even some simple dry brushing or an overspray or something would add a little bit more to the figure. 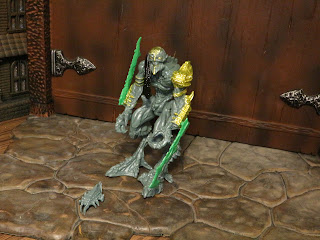 Is Krepitus the best figure from the Kharn yet? It's very likely. He's just so darn cool and he checks so many boxes of the things we loved as kids. Alien? Check. Bounty Hunter? Check. Animal companion? Check. Blades mounted to his forearms? Double check! Krepitus is a super fun toy with an impressive sculpt, great accessories, and a super fun design. He's an excellent figure on his own but that $1.25 price tag makes him all the more appealing. This guy is Epic and he's totally worth tracking down.
This is the first figure of Krepitus I've reviewed. For more Final Faction reviews check out the following:
Amari
Arrow ATV
Arrow ATV Weapons & Armor
Churro & FD-0
Crawler
Decimator
Diabol
Huntra
Riptide
Spc. Scope
Torn