Old School MOTU: Stridor from Masters of the Universe by Mattel 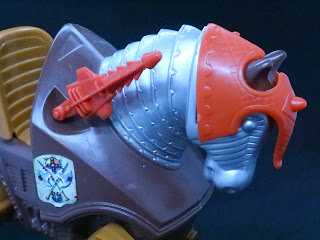 Despite all of the craziness going on with the Covid-19 pandemic there are still lots of new toys being released right now. My shelf of cool stuff to be reviewed is currently filled with Masters of the Universe POP! vinyls and G.I. Joe Classified Series figures but I'm always excited to go back and review a classic MOTU item. Today I'm checking out Stridor, the Heroic Armored War Horse! Stridor was released in 1984 as part of the third series of MOTU toys and was available on his own or available in a gift set with Fisto. I received my Stridor for Easter of 1987 in the gift set, though this isn't my original Stridor I'm reviewing here today (though the Fisto in one of the pictures is my original Fisto). Stridor was an incredibly cool toy that wonderfully merged the barbarian fantasy element (armored horse) with the sci-fi element (robot) of the property. I realized I was missing Stridor's helmet a week or so ago and so I ordered one to get him back to his original glory. Ready to ride with Stridor? Then let's check him out... 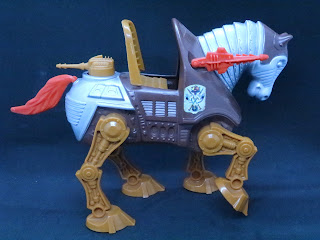 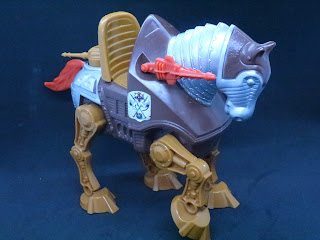 * Stridor is a pretty decent sized toy with a fantastic aesthetic. MOTU has lots of iconic vehicles and I don't think it's an exaggeration to say that Stridor is in the top 10. It might even be in the top 5. Would you describe Stridor as steampunk? I could see it being an apt descriptor for him. I love the mixture of brown, tan, and silver on this piece. It just looks fantastic! 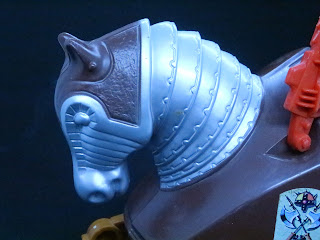 * While the body looks very machine-like, the head does resemble a horse. A robotic horse, still, but it is more animal-like. I like how Stridor's neck actually looks segmented like it might actually work and move (the 2018 Stridor from Super7 actually had an articulated neck, so that was a nice improvement). 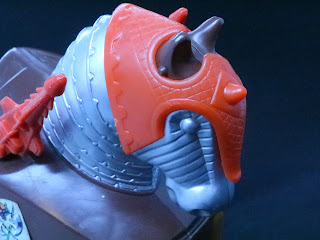 * Stridor actually looks a lot cooler with his helmet on. It feels very medieval and looks like something from the concept art of the toyline. There are actually some little nubs on Stridor's ears that sort of "lock" the helmet in place, too. 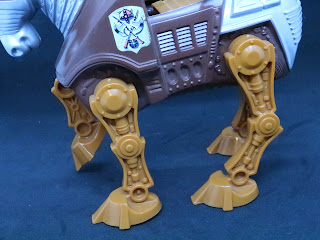 * Stridor's legs are very detailed and have a great mechanical look to them. The side of his body also has some nice sculpting to show off various grates and rivets and such. 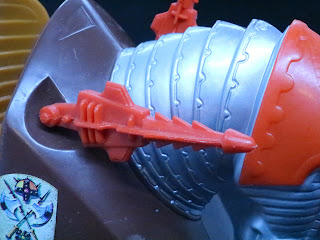 * There are two laser cannons mounted on the sides of Stridor's neck. They are removable (and are often found missing on loose samples) and can pivot up at an angle to blast the Evil Warriors out of the sky! 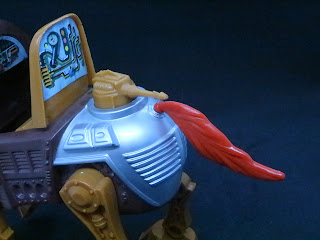 * On his rump Stridor has a swiveling tail (it is removable and is also often found missing on loose samples) and a pivoting laser cannon. The laser cannon is pretty cool; while it's incredibly simple it seems like something that would be pretty handy to deter anyone chasing after Stridor. I always wondered how the rider was supposed to aim, though. Maybe Stridor himself aims? 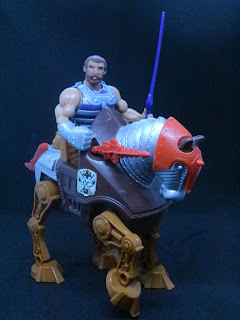 * Stridor doesn't have a traditional saddle like Battle Cat or Panthor. Instead, he has a cockpit that most MOTU figures can sit in. Figures stay in Stridor quite securely. Stridor is a great way to display a figure with loose legs if you're not up to repairing them! He looks amazing with Fisto, though. That is my original Fisto and he looks happy as anything to be back on his iron horse, doesn't he? Colin Bailey was the designer of both Stridor and Fisto, so maybe he intended them to be a duo from the very beginning? 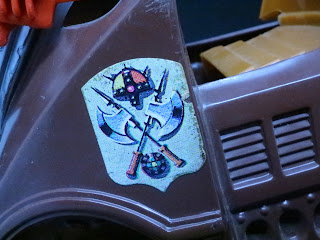 * While the stickers on my Stridor are a bit worn (and one on the front is missing), I still love them. The Masters of the Universe vehicles, particularly those from the early years of the line, have such fantastic art on their stickers. This crest on the side looks amazing, particularly as you're galloping Stridor into battle. 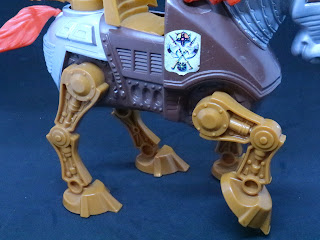 * My only complaint about Stridor is that his legs are completely static. Seriously, they don't even swivel at the top. They're almost built to be swivels as well, so I wonder why Mattel just didn't design them to have articulation? I always wanted a little bit of movement from Stridor. 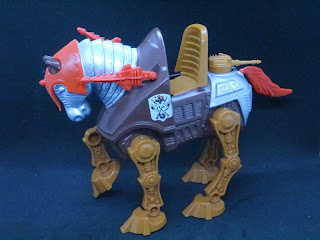 Stridor is a fantastic toy and one of my favorite vehicles from the vintage MOTU line. The toy was pretty popular and the mold was used again in 1985 to create Night Stalker, a cybernetic horse for the Evil Warriors. While I've always wanted Stridor's legs to move he's still an Epic release and an iconic part of one of the most (perhaps the most) iconic toylines of the 1980s. For lots of great information and art, check out the Battle Ram Blog's article on Stridor! You'll be glad you did!


If you're a fan of Stridor make sure to check out my review of the Masters of the Universe Classics Stridor from Super7.