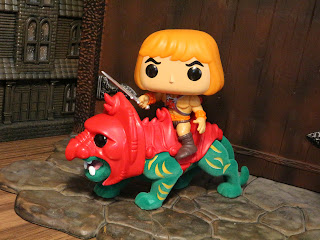 Target recently put out an exclusive version of POP! Rides He-Man on Battle Cat #84 as part of their TargetCon and I ended up picking him up. Unlike the standard version released in 2020, this version is flocked. Yup. Well, Battle Cat is flocked, at least. Yeah, the vintage Battle Cat wasn't flocked (Panthor was) but I'm a hug fan of Cringer/ Battle Cat and getting a flocked version of him was something I just couldn't pass up. Want to take a look at this new Target exclusive? Then join me after the break... 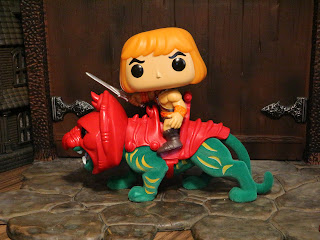 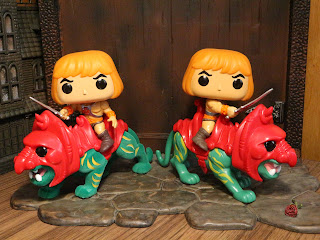 Comparison:
* The TargetCon flocked He-Man on Battle Cat #84 is on the left while the standard He-Man on Battle Cat #84 from 2020 is on the right. What's the flocking difference? The difference is the flocking. Yup. The new one is flocked while the old one ain't. That's it. This is definitely going to be a brief review because you can go back and check out the previous review for all of the standard details. 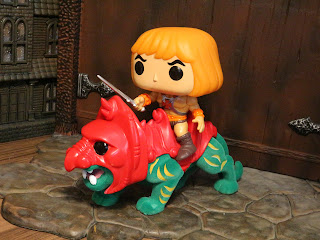 The Positives:
* Overall, this is the same POP! vinyl as the last version except for the flocking. It's a really nice POP! vinyl with a fantastic classic He-Man on top. Of course, He-Man's head can rotate, offering up a little bit of articulation. 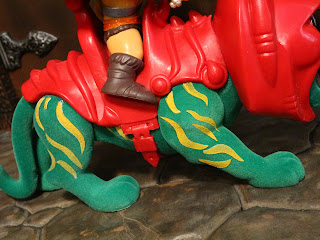 * The flocking on Battle Cat looks fantastic. Not only is he flocked but he's flocked and still has his distinctive stripes. I love it! He looks great and this simple little touch really improves the overall toy. 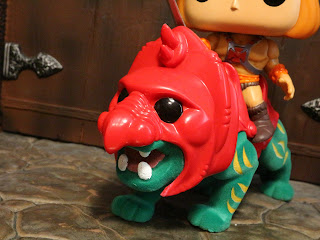 * Funko also flocked Battle Cat's mouth and teeth, making sure to make the colors distinct. It makes this little guy even cuter and more adorable than before! 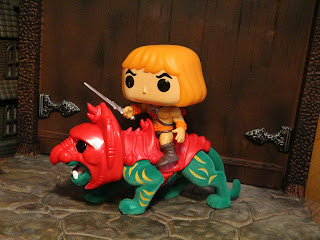 This POP! Rides version of He-Man on Battle Cat is the same price as the one from two years ago and it's flocked. That's not bad. It's a fairly sizeable POP! vinyl and definitely feels like a solid, sturdy display piece. This is an Epic depiction of He-Man and Battle Cat, the most iconic image from Masters of the Universe. If you missed the previous offering this is the one to get. If you have the previous one this one certainly wouldn't be a must have unless you're an absolute POP! nut or Battle Cat fan. As a huge fan of Cringer/ Battle Cat, I just had to have a flocked version of this big cat.
I've reviewed so many figures of He-Man/Prince Adam and Battle Cat/ Cringer that they have their own review archives. Check out Fabulous Secret Powers and Cringer's Crib for all of my reviews of these guys!
For more POP! Rides reviews check out the following:
He-Man on Battle Cat #84
She-Ra on Swift Wind #279
Skeletor on Night Stalker #278
Skeletor on Panthor #98
Skeletor on Panthor #98 (Flocked)
Posted by Barbecue17 at 4/06/2022