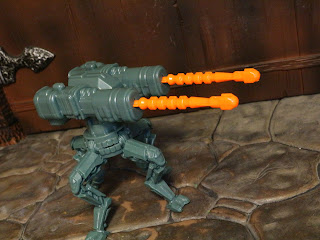 The X-4 Turret is the last of the Perimeter Defense series of releases and is the only accessory for Alpha Team 1 (the other three are for the Kharn). It's a simple missile firing turret that wouldn't look out of place in a number of other toylines: G.I. Joe, Star Wars, or practically any Kenner action figure line of the 1990s. It's pretty unique that it's sold on its own, though. Releasing accessories like this just isn't something we see many companies selling toys at mass market retail do these days. It reminds me of the G.I. Joe Action Packs from the mid to late 1980s. The X4 Turret provides a little extra firepower against the Kharn, or any other villainous toys in your collection. Let's check it out after the break... 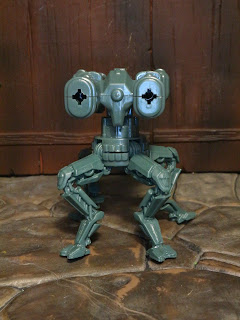 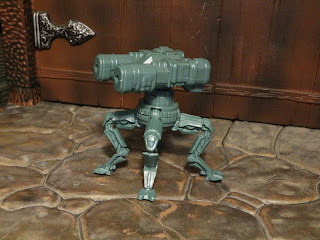 * The X4 Turret is a simple double barreled turret with four legs supporting it. The sculpted details aren't bad and while there's no paint applications or anything on the turret, it doesn't look bad molded all in one color. It has just enough of a sci-fi aesthetic to it to work in any number of properties. 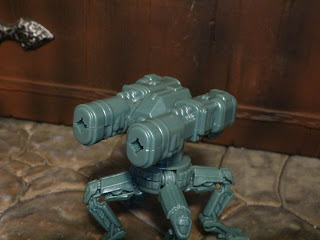 * The launcher has two barrels and can rotate freely around the base. 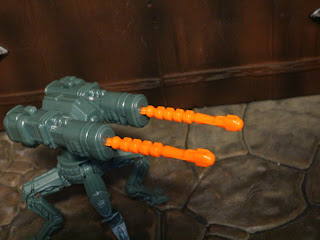 * The turret does actually fire, launching the missiles a fair distance. The missiles do sort of look like gun barrels, so you could theoretically just pretend these are barrels rather than missiles. they're bright orange, though, so maybe they're overheated from so much repeated firing? 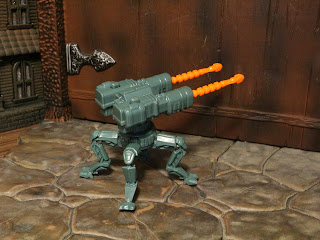 * The turret does have a few points of articulation. The legs are all hinged which allows the turret to be folded up or placed on uneven terrain. The turret also spins freely, allowing it to engage the Kharn from any direction. 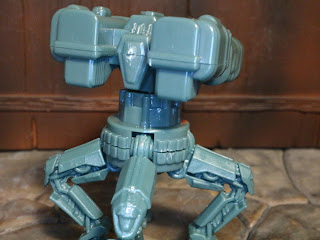 The Negatives:
* My only compliant with the X4 is that the turret spins too freely. If it's not perfectly even it tends to spin to the lowest firing position, meaning you can't reposition the legs to elevate the firing trajectory. It would have been nice if the joint were a bit tighter. 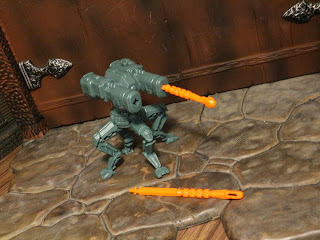 The X4 Turret is definitely an accessory but for the low price of $1.25 is that really too bad? I can see this being really popular for customizers and army builders. Heck, wargamers could probably get a ton of use out of this piece. It's not the greatest missile launching accessory of all time but it's pretty solid for the price and is incredibly versatile. I'd give it a Good and a 1/2. The X3 Turret also showed up on the Final Faction cartoon which is a three legged turret with a single barrel. Think we'll see it anytime soon?
This is the first X4 Turret I've reviewed. For more Final Faction reviews check out the following:
Amari
Arrow ATV
Arrow ATV Weapons & Armor
Churro & FD-0
Crawler
Decimator
Diabol
Huntra
Krepitus
P-131
Riptide
Ruck
Spc. Scope
Torn