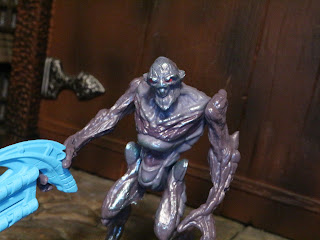 I've been checking out quite a few of the 2020/ series 1 Alpha Team 1 figures from the Dollar Tree/ Family Dollar exclusive Final Faction line but I haven't really gone back to look at any of the Kharn yet, have I? Let's give the Kharn some attention by checking out one of the first series army builders: the Drone. The Drones are your standard, basic grunts. They're so basic that you can practically smell the pumpkin spice lattes on them. OK, not really. They are your great standard baddies, however, and in a video game you'd be blowing these guys away by the truckload. One of the coolest thing about Final Faction is that it's pretty affordable to army build. Since these guys were originally a buck (now a buck and a quarter), for less than $10 dollars you could have a pretty solid little squad of them. Ready to check out the Drone? Then join me after the break... 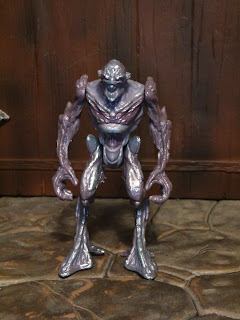 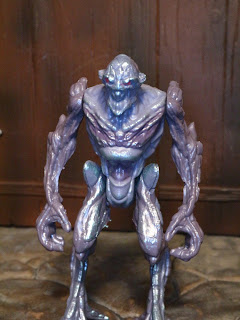 * I've said in a few of my previous reviews that the Kharn remind me of the enemies from Gears of War but you can probably see inspiration for them in dozens of sci-fi franchises. They're purple, goat legged creatures with something of an exoskeleton and some really neat, shiny paint applications. There are actually a few different colors on this guy and he looks fantastic. 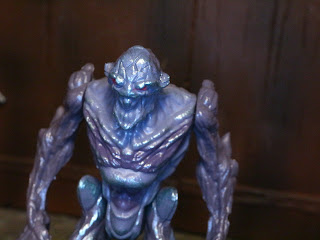 * The Drones are ugly chaps with funky armored faces and red eyes. 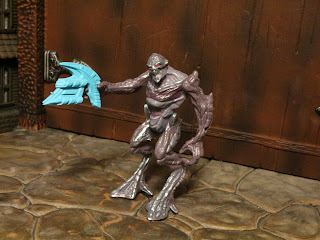 * Like most other figures in this line, the Drone is sporting 5 points of articulation. He's fairly sturdy and does what you'd expect for a 5 poa figure. 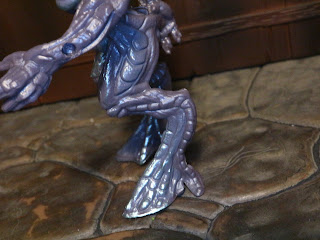 * I like the crazy legs on the Kharn. They definitely have some nice sculpted details on them. 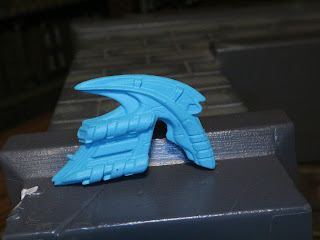 * Each Drone comes with one of these wicked looking blue guns. What is it? The top looks very sharp, perhaps like it could be used as some sort of melee weapon. The middle barrels appear to be some sort of double barreled laser blaster while the bottom looks like something that launches spikes or some other sharp projectile. 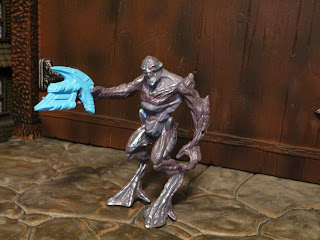 The Drones are really fun and tough to beat for a buck and some change. I own three of them and might pick up more when I get my hands on the new accessory sets. There are definitely lots of options with the accessory sets to customize these grunts to make a unique looking mob of them. These are simple, fun toys, and there is just something so satisfying about them. They remind me of my beloved Kenner Kenner Alien and Predator lines for some reason, even though they're in different scales. Maybe it's just the theme and aesthetics of the lines? This Drone gets a Great rating from me.