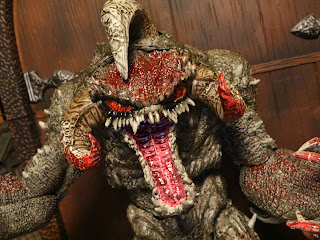 I picked up another Spawn figure recently: The GameStop exclusive bloody variant of the Violator. I originally preordered this guy in store at the end of last year (nothing like walking into GameStop and asking for a bloody Violator to get some weird looks thrown your way) but when he showed up online and the GameStop I preordered him at couldn't tell me when he'd arrive I decided to cancel my preorder and just order him off of the website. He shipped quickly and, wow, was I surprised by the mass of this guy! I had the original series 1 Violator figure as a kid and he's one of the few figures I remember breaking right after I opened him. The horn that caused his jaw to open and close snapped and my parents returned him for a second one. The Violator is definitely the go to antagonist for Spawn and I'm glad to finally have him on the shelf of these new Spawn figures. The regular figure was released last year but I opted to wait for the bloody version because he's just so much more striking than the standard figure. I mean, that guy is cool as heck, too, but this guy is just shocking. Like, good old fashioned McFarlane nightmare fuel. It reminds me of the good old days when your mom gave you a disappointed look when you came home with a McFarlane Toys figure. Let's tale a look at the bloody variant of the Violator after the break... 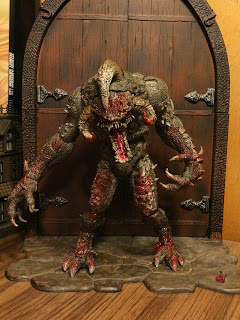 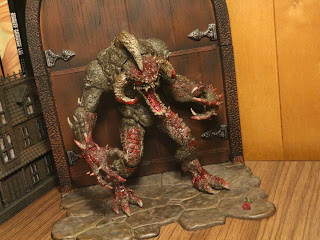 The Positives:
* This guy is really big. He stands about 11 inches tall if you fully extend his legs, though I can imagine lots of collectors will display him in more of a crouched position. He's way bulkier than the skinny Violator figure from the original series 1 and the early comic art but he's way more menacing. 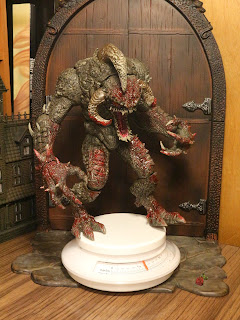 * I don't usually weight my action figures but I wanted to point out that this figure of the Violator isn't hollow or rotocast or anything; he's a solid chunk of plastic. I put him on my wife's little kitchen scale (typically used for weighing spices and such) and he weighs close to 3 pounds. Holy smokes! Seriously, this guy is a behemoth and you could definitely injure someone by meleeing them across the noggin with this bad boy. You know those weird Facebook questions where it says "You have to defend yourself from an intruder using the closest object to your right hand. Will you survive?" If you're currently reviewing or playing around with the Violator, the answer should be a resound yes. The Toddfather don't play around. 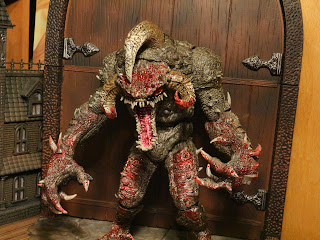 * The sculpt is amazing on this figure. McFarlane Toys has always excelled at making the gnarliest, most gruesome monsters in the business and the Violator might take the cake of everything I can remember from McFarlane. The amount of detail work here is truly impressive and the blood splatter effect is really well done. It's very gruesome and looks quite realistic. McFarlane Toys has always done impressive work with most of their bloody variants and it definitely makes this version of Violator the one worth snagging. 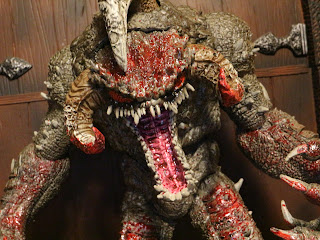 * The Violator has one ugly face! His horns and that weird spike on top of his head have a really unusual texture to them that definitely look like bone or, well, whatever horns are made of. The blood splatter on his face looks excellent though it's not on his teeth or mouth or anything. Must not be from him eating someone. 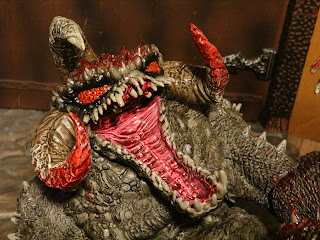 * Here's a better look at the Violator's creepy, creepy eyes, those unsettlingly sharp teeth, and his opening mouth. Yes, the lower jaw is hinged so you can open and close his mouth. Granted, the Violator definitely has always had a wicked underbite, so you're not really going to get him to close his mouth, but it's a cool feature nonetheless. 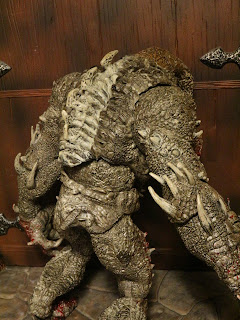 * Flip Violator around and you can see his rhino-from-hell-like skin with bits and pieces of his skeleton popping out. He's got lots of spikes top. McFarlane Toys almost always do a great job with detail but the Violator is one of the most impressive I've ever seen. 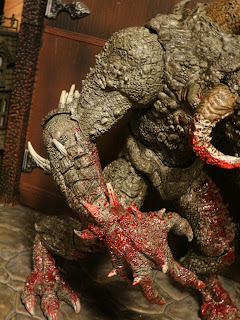 * His arms are pretty crazy, too. The various colors used and paint effects really bring out all of the tiny elements of this sculpt. This looks far more impressive than you would believe a $50 dollar toy could look. 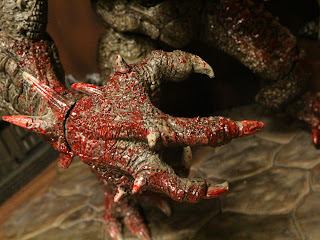 * Here's a close-up of the Violator's blood drenched claws. Icky! 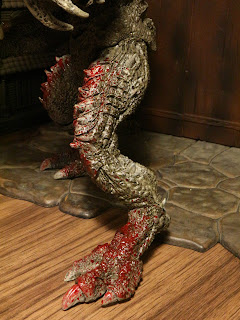 * The Violator's legs are bent, like an animal, and thus they have what I believe is called a hock (that weird joint above the "ankle" but below the "knee") which gives him his unsettling, crouched stance. Remember how the original Violator was just a bendable figure? How far we've come. You will have to tweak his poses to get him to balance since he's fairly top heavy but it's definitely doable. 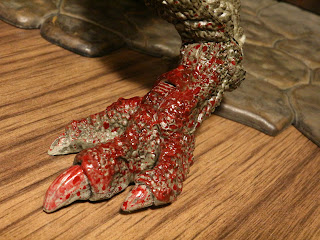 * The Violator's three clawed feet also have a generous smattering of blood on them. This guy's surely been up to some wild crap. 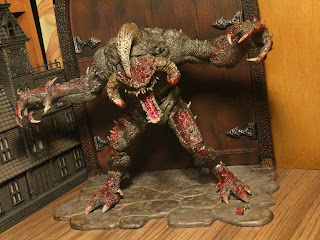 * Let's talk about the articulation here because it's not readily apparent how much articulation this guy has. Yes, some of the joints have a more limited range of motion due to the Violator's build and size, but I'm still impressed. He's really quite fun to play with and you should be pleased with how posable he is in hand. Sturdy and durable, too. Some of the joints are ball joints and if you move them too far they'll pop off, but you can just pop them back on. That's a pretty welcome feature. 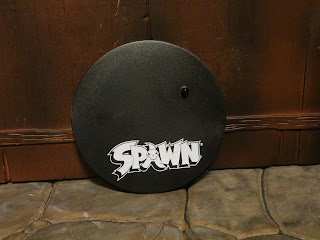 * Like the rest of the Spawn figures the Violator comes with a simple, classy display stand.
The Negatives:
* Does the Violator really need this stand? It's comically undersized. It does fit on him and does add a little support but something a bit larger for more extreme poses would have been nice for Violator and the other "Mega" figures in the line. 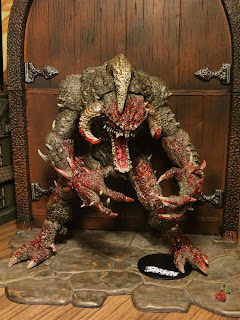 I'm not saying that you should judge an action figure by it's weight or size or anything but, dang, the Toddfather totally failed recess because he just doesn't play around. Particularly when it comes to his Spawn stuff. This guy is $50 bucks and he's massive. The Violator is a unique sculpt with crazy detail and paint, lots of joints, and no shortcuts taken that I can see. This is a creepy, crazy action figure and the fact that this guy is standing 11 inches tall and weighing 2/12 pounds out there for $50 buck while Hasbro's "deluxe" figures are $30 some bucks for lots of reuse on a standard figure is crazy. You may not be a Spawn fan but action figure collectors should still realize this is a pretty darn fine piece. Terrifying, causing small children to run scampering for their mothers and even the most stalwart among us to wet their pants, but still a darn fine piece. This guy is Epic. I'm not picking up everything from the new Spawn toyline, but what I've picked up has been pretty fantastic.
Looking for more of the Clown/ Violator? Then check out my review of the 1994 series 1 The Clown and the 2021 The Clown.
For more Spawn figures check out the following:
The Clown
Mandarin Spawn Deluxe
She-Spawn
Posted by Barbecue17 at 4/04/2022