Toy Review: Land Shark from Masters of the Universe by Meg Construx 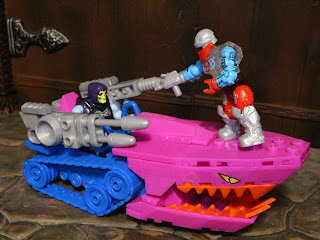 The Land Shark is one of my favorite Masters of the Universe vehicles and it's pretty cool Mega Construx has released it in the line complete with a functioning jaw that opens when it rolls and two fantastic minifigures. Mega Construx isn't releasing an overwhelming amount of MOTU product but what they have put out is extremely well done and has a great feel to it. They really include some unique pieces to ensure that the builds are accurate to their toy counterparts while also still utilizing lots of standard pieces to ensure that these are still fun to build. The figures included with the Land Shark aren't new characters to the Mega Construx line (Battle Armor Skeletor first came with the Panthor at Point Dread set and minicomic Roboto was released as a single carded figure) but they are new variants. This BA Skeletor has battle damage on his armor while this is the first appearance of vintage toy Roboto. Ready to look at this nifty little set? Then join me after the break... 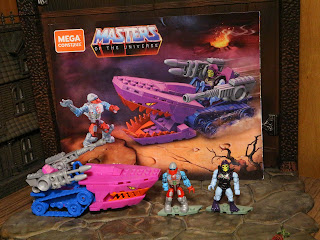 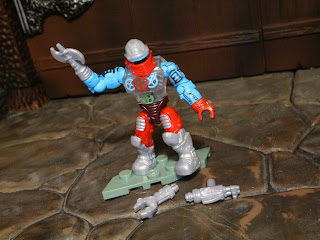 Roboto:
* Roboto looks fantastic as this is the first Mega Construx version based on the vintage toy. Unlike the single carded release, he has a translucent chest with his gears printed on. He has the same swappable hands (both can be swapped out with his axe, claw, or laser blaster) and the display stand. 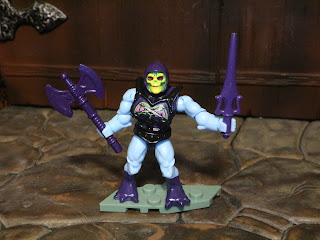 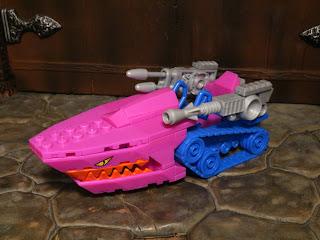 Land Shark
* The Land Shark is the highlight of this set and it's another success in my book. The Mega Construx team continues to do a fantastic job of faithfully recreating the vintage toys in building block form and I love almost everything about this model. The Land Shark is definitely one of my favorite MOTU vehicles (it's either this or the Roton) and the size and scale of this version of it is fantastic. 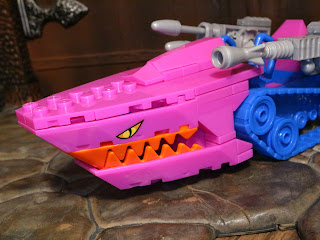 * The teeth definitely seem to be unique pieces and they fit on the upper and lower jaws and come together quite nicely. The Land Shark's eyes are printed on the bricks and look very menacing. I like how Mega Construx tends to use printed bricks, even in the smaller sets. It's something Lego seems to be doing less and less of these days, even in the larger and more expensive sets. 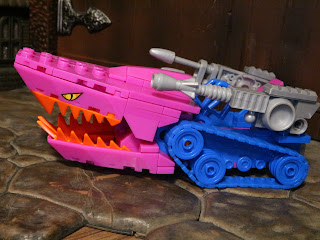 * The treads of the vehicle are rubbery and fit over three free-rolling. There's also an inner mechanism that causes the upper jaw to pop open and snap shut when the treads move. It's nicely designed, very sturdy, and works great. It's one of those things that just makes this toy more fun to mess around with. 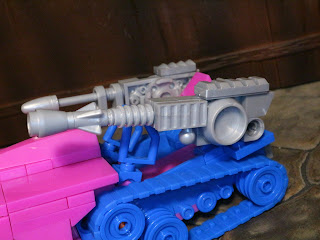 * The Land Shark has two large cannons and, unlike the MOTU Origins version, this one has the asymmetrical weapons of the vintage toy. The left side of the vehicle has a single barreled weapon with a flared barrel tip. The weapons move up and down and there are some cool little details since these are made from multiple smaller pieces. 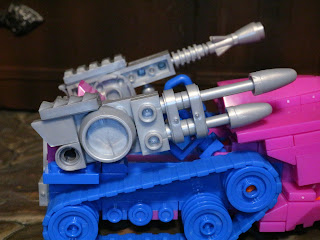 * The right side is a double barreled weapon that also moves up and down and is also assembled from at least a dozen different pieces. 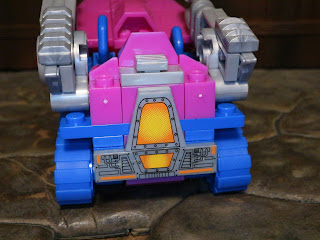 *The back of the Land Shark uses printed pieces to show off the engine/ exhaust. The printing is nice and sharp on these plates. 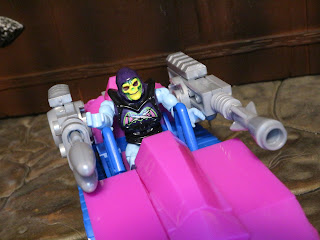 * Skeletor, or pretty much any other Mega Construx minifigure, fits perfectly inside the Land Shark cockpit. The handles are on hinges and make it easier for the figure to hold on tight for a wild ride. 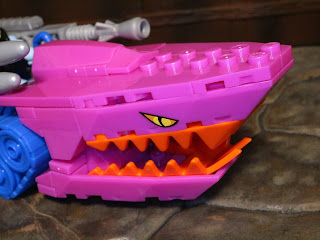 The Negatives:
* This one is probably a bit nitpicky but the color on land Shark might be a bit too pick. The vintage toy and the Origins Land Shark are both darker with more purple, or perhaps magenta, in their color. 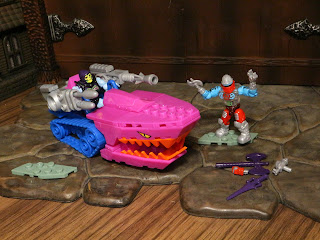 The Land Shark set is a very, very Epic piece and a great value. Roboto and Battle Armor Skeletor are too excellent minifigures with a lot of play value and make great additions to the set. The Land Shark is just an excellent vehicle. It's fun to build, sturdy, and has an actual action feature in the chomping jaws . How cool is that? As something of a Land Shark connoisseur I'm definitely quite pleased with how this set turned out. There's a lot of play value for the money here and a lot of fun to be had for those of us collecting the things and those of us playing with them. And if you do both? All the better.
Do you also love the Land Shark? Then check out my review of the Hot Wheels Premium Land Shark and the He-Man/ Wind Raider & Skeletor/Land Shark set and the MOTU Origins Land Shark.
If you're looking for more of Roboto I've also reviewed the MOTU Origins Roboto, the M.U.S.C.L.E. Roboto from Series 3 Pack B, the Mega Construx Roboto, the Super7 Filmation inspired Roboto, the POP! Roboto #81, the Vinyl Soda Roboto, and the 200x Roboto head from the MOTUC Heads of Eternia set.
I've reviewed so many toys of Skeletor/Keldor that he has his own review archive. Check out Snake Mountain for more Skeletor reviews than you'll find anywhere else on the internet.
For more Masters of the Universe Mega Construx reviews check out the following:
Battle Bones
Battle Cat Vs. Roton
Battle for Eternia Collection
Battle Ram
Castle Grayskull
Evil-Lyn (Mega Construx Heroes)
Evil-Lyn
Evil-Lyn (Series 2)
Faker
Fisto
Fisto & Cliff Climber
He-Man & Jet Sled
He-Man VS Beast Man
Man-At-Arms (Mega Construx Heroes)
Man-E-Faces
Moss Man
Panthor at Point Dread
Prince Adam
Roboto
Scare Glow
Scare Glow (Mega Construx Heroes)
Skeletor
Skeletor & Panthor
Stratos
Stratos (Mega Construx Heroes)
Stinkor
Teela
Trap Jaw
Trap Jaw & Laser Cannon
Tri-Klops
Wind Raider Attack
Zodac & Scubattack
Posted by Barbecue17 at 4/14/2022