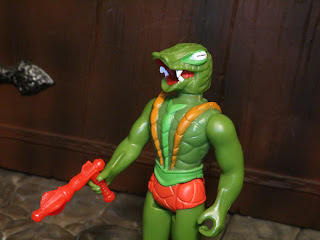 As we move along in our look at the different characters from Mattel's vintage 1984 lineup and how they've been reinterpreted over the years in different toylines and by different companies it's time to check out Super7's Kenner inspired take on Kobra Khan from their ReAction range of figures. How would a vintage Masters of the Universe figure look as a Star Wars era Kenner action figure? Here's your answer! Kobra Khan was released in 2017 as part of the third series of figures and was the closest this line ever got to the Snake Men. Why does everyone ignore the Snake Men? Kobra Khan is a Repton who was first allied with Skeletor and the Evil Warriors, so he's appropriately scaly and weird looking. Let's take a loom at a figure from Super7's time with the MOTU license after the break... 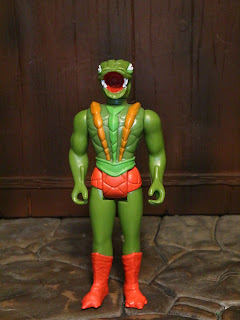 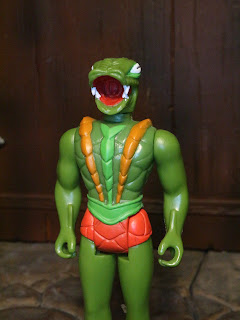 The Positives:
* Kobra Khan looks pretty impressive. Obviously the intention of this line was to present the figures in a faux Kenner styled vintage manner but Kobra Khan really does look extremely cool with some nice detail on his torso and trunks. His colors are quite vibrant and the details on his weird reptilian ridges across his torso look fantastic. 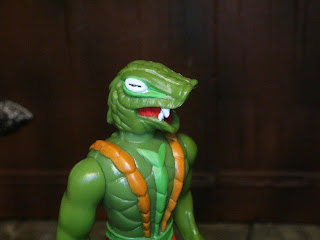 * The headsculpt is one of the best in the MOTU ReACtion line and looks pretty intimidating. Kobra Khan was never a bumbling fool like so many of Skeletor's other lackeys and this portrait shows why. The dude is legit terrifying. Those eyes are creepy. 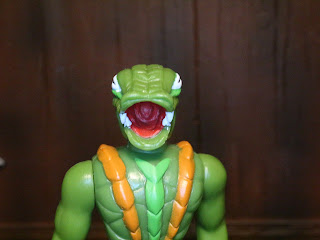 * While he doesn't spray water like the vintage Kobra Khan figure did, this version's mouth is fully sculpted with some sharp fangs and a large, hollow mouth. It's a really nice detail, especially on a simpler figure like this. 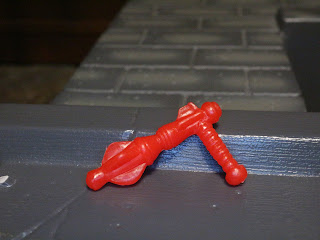 * Like the vintage toy before him, the ReAction version of Kobra Khan has the same blaster as Zodac. It's bright red and looks exactly how you'd expect it to look. It fits securely in his right hand. 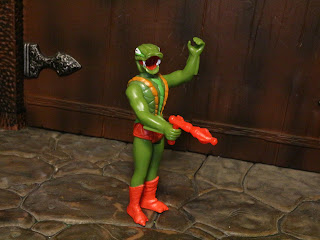 * If you've ever picked up a retro figure like this, you know what to expect: 5 points of articulation and all swivel joints. Kobra Khan feels well made and sturdy; he's definitely of superior quality than most of the earlier ReAction figures that Funko put out. Super7 has always been very consistent in the quality of their ReAction lines. 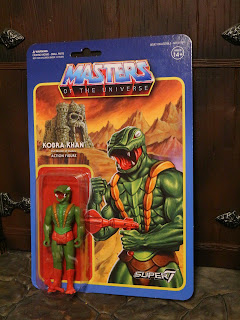 * The card art on most ReAction figures released by Super7 is beautiful and their Masters of the Universe line was one of the best. Kobra Khan has awesome art by Jason Edmiston on the front. To preserve the card I actually made a slit in the top of the blister so I can slide the figure in and out. It work great and allows the figure to be displayed inside and outside of the card. I've got mine hanging on a metal pegboard similar to what you'd see in a retail store! 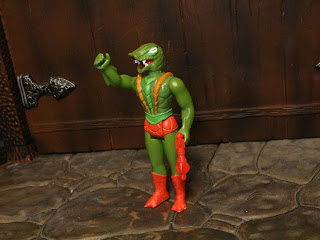 Kobra Khan is one of my favorite releases in the ReAction line. He looks incredible and just stands out as a very unique release. The ReAction line had a bunch of figures in it (check out the ReAction Masters blog for a full list) but sadly there were many characters that Super7 never got the chance to do. While they no longer have the MOTU license, I do hope that some day Mattel will allow them to get it again to, at the very least, continue on with ReAction. Kobra Khan is a Great figure from this nostalgia driven series.
If you're looking for more of Kobra Khan then check out my reviews of the M.U.S.C.L.E. Kobra Khan from the #1 Masters of the Universe (green), the Funko POP! Kobra Khan #41, the Vinyl SODA Kobra Khan and Battle Mode Kobra Khan, the Kobra Khan POP! + Pez dispenser, and the MOTUC Camo Khan.
For more Masters of the Universe ReAction reviews check out the following:
Anti-Eternia
Anti-Eternia He-Man (Clear Smoke)
Beast Man (Cartoon Colors)
Beast Man (Ghost)
Beast Man (Leo)
Beast Man with Weapons Pack
Evil-Lyn
Faker
Faker (Leo)
Grizzlor
Grizzlor (Dark Variant)
Grizzlor (Toy Variant)
He-Man and Battle Cat
Hordak
Hordak (Grey)
Man-At-Arms (Metallic)
Man-At-Arms (Movie)
Mantenna
Mantenna (Toy Variant)
Mekaneck
Mer-Man (Carry Case Colors)
Mer-Man (Invisible)
Modulok A
Modulok B
Modulok (C)
Modulok D
Modulok (Top Toys Variant)
Orko
Orko (Cartoon Colors)
Ram Man
Ram Man (Mini Comic)
Scare Glow
Scare Glow (Clear)
Shadow Weaver
She-Ra
Skeletor and Panthor
Skeletor (Leo)
Skeletor (Los Amos)
Skeletor (Midnight)
Slime Pit He-Man
Stinkor
Stratos (Blue Wings)
Teela (Shiva)
Trap Jaw (Cartoon Colors)
Posted by Barbecue17 at 4/14/2022