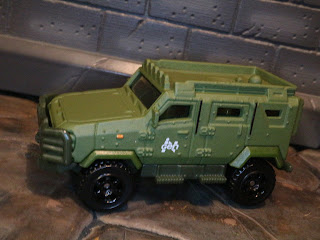 Today I'm checking out another vehicle from the second series of Jurassic World vehicles from Mattel's Matchbox line. I'm really liking these, particularly for the around a $1 price point. Mattel's Jurassic Park line has been incredibly affordable and it seems to be selling like hot cakes so more stuff just keeps coming out. The Textron Tiger appeared in Jurassic World as the main vehicle of the InGen security team but I don't remember it appearing in green. Can anyone confirm that these actually appeared? The only ones I remember are whitish- grey. Mattel has released that version as a single packed vehicle and in the Island Transport Team 5-pack that I reviewed last month. While this is really just a paint variation, let's still give it a once over after the break... 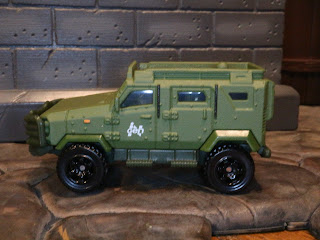 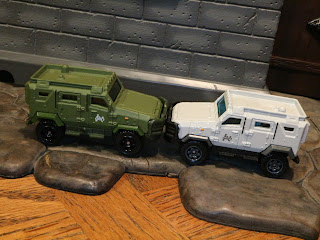 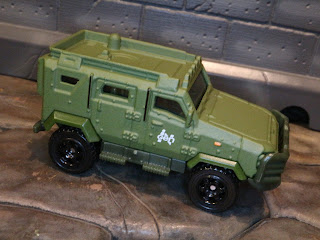 * Again, the vehicle is the same as the last one other than the new green paint job, though it is still a good vehicle. While I'm not sure that this color of the Textron Tiger appears in the film I do like the green color scheme. The InGen logos on the doors are nicely defined and the vehicle itself has a cool armored look with lots of rivets. 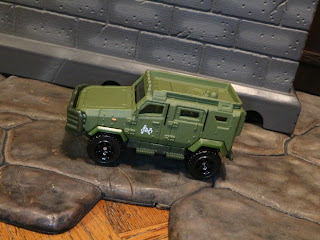 The '10 Textron Tiger is a really nice miniature car. While I don't think it is film accurate, I still dig the green paint scheme. The sculpt is good, the color scheme is solid, and it is kind of tough to find much fault with a toy vehicle from Jurassic Park that costs around a buck. This is a Great little vehicle and makes a cool addition to your dinosaur wrangling team.