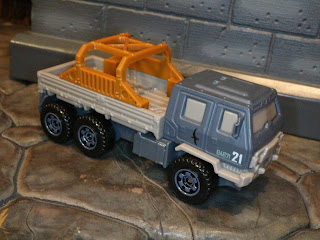 On Thursday evening I was at my local Wal-Mart and I discovered some new Jurassic World: Fallen Kingdom Matchbox cars. One of the vehicles I picked up is called the Off-Road Rescue Rig. It's an armored truck, probably an Oshkosh FMTV, that is equipped with a harness and chains on the truck bed to accommodate transporting a dinosaur of some sort. I definitely recall similar vehicles in the film but having only seen it once I can't confirm any specifics about when this was used. This is definitely used early in the film, however, when the dinosaurs are being "rescued" from Isla Nublar. Matchbox has released quite a robust offering of vehicles from the Jurassic Park series and considering they cost around a dollar each, I'm more than happy to pick them up. Let's check up this cool dinosaur hauler after the break... 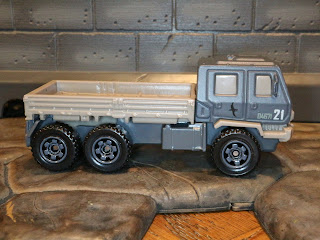 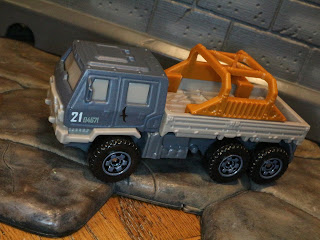 * The truck is a pretty heavy duty looking truck with a large bed equipped with a removable reddish-brown harness used to restrain a dinosaur. It also sports six tires, probably a requirement for "off-road" status. It's a nice looking vehicle that seems like it is built for some tough trips. 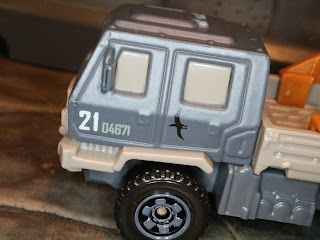 * I like the printing on the side of the vehicle that includes some vehicle designation numbers (the #21 and the #04671) and a logo of a Pteranodon. The detail isn't bad on the cab of the truck but I do wish the windows used translucent plastic like Hot Wheels. From what I can tell, the windows on these things are supposed to be clear and translucent. 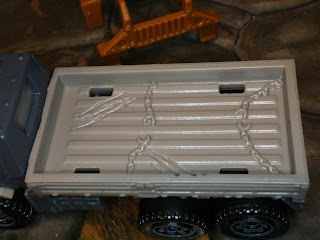 * The truck bed is very cool. You can remove the harness rig in order to see some chains on the bed of the truck and a massive slash in the metal. 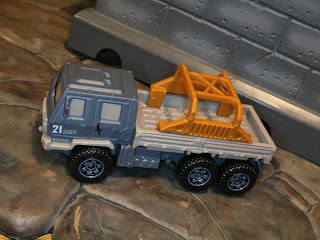 The Off-Road Rescue Rig itself is cool but the ability to remove the harness for the dinosaurs and the little details on the truck bed elevate this quite a bit for me. This one easily gets a Great rating, especially considering how inexpensive it is. I'm really glad that Mattel/ Matchbox seems so devoted to this property and I have high hopes that we will see some more Jurassic Park: Legacy vehicles in the future. Still, for now we're definitely getting some great stuff and considering how affordable it is fans should be thrilled!