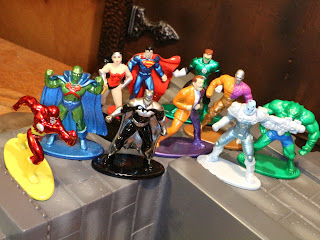 I recently stumbled upon another set from the DC Nano Metalfigs minifigures by Jada Toys that I didn't realize was available. It's a 10 pack that features seven heroes and three villains for $10. That's a pretty good deal! While only four of the figures are listed as exclusives to this set (Two-Face, The Element Man, Martian Manhunter, and Batman in black and silver), I have yet to see the single packed Mr. Freeze and the black and red outfitted Wonder Woman, so there does seem to be quite a bit new here. Plus, since four of these characters are members of the DCEU Justice League, they fit in perfectly as part of the "Unite the League" series of reviews I'll be running until Justice League comes out. So far I have yet to see any of the Nano Metalfigs anywhere except for at Wal-Mart, but they're supposed to hit retailers everywhere soon. I'm loving this little line of die-cast metal minis and it's always fun to talk about them. Let's check them out a bit more closely after the break... 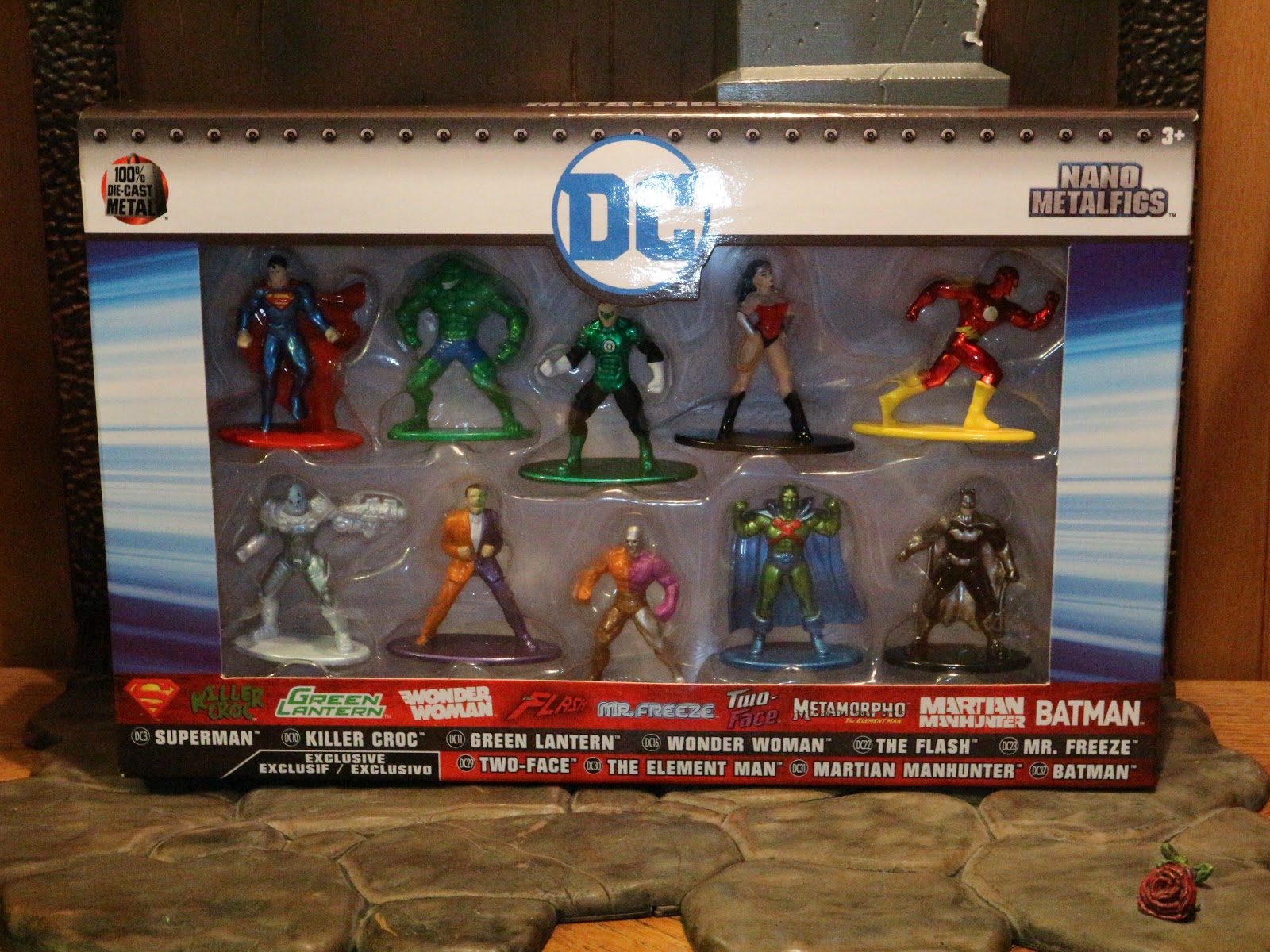 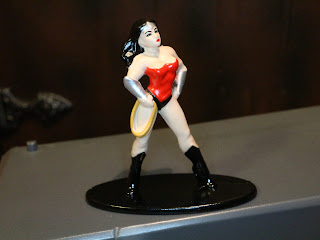 * The Wonder Woman in this set isn't an exclusive, but I haven't seen her in the single packed line yet. The sculpt is different than the DC4 figure currently available in a single pack and in the 5-pack A and I actually like it a bit better. It's not as busy as the DC4 sculpt but has a very powerful, bold look to it. She looks great standing alongside the rest of the Justice League. I'm also loving the inclusion of the Lasso of Truth prominently featured on her right hip. 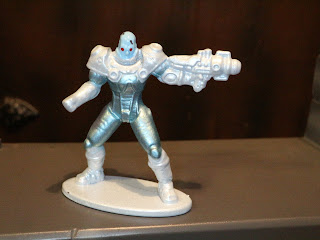 * Another figure that isn't listed as an exclusive but whom I haven't seen in the single packs yet is Mr. Freeze. I love Mr. Freeze and this is an excellent rendition of him. It really reminds me of the version of Freeze from the first Batman line Mattel released in the early 2000s. There are a few scratches on his forehead, though, but they're heard to notice with the naked eye. 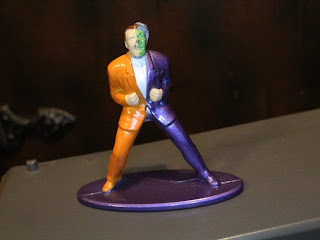 * Two-Face is an exclusive to this set and I dig him. I love the green face, the orange and purple jacket, and the maniacal laughing pose. He's a really cool figure that perfectly captures Two-Face's often flamboyant and devious personality. 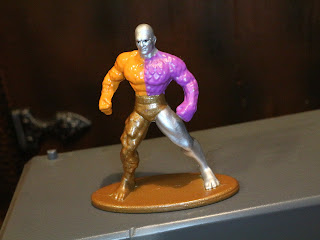 * Metamorpho, AKA Rex Mason, AKA The Element Man, is an awesome minifigure. I love the metallic look of the paintwork on these figures and Rex really pulls it off. This is a fantastic, classic representation of the character. The textures on this guy are particularly nice for this scale. Metamorpho is one of those somewhat more obscure characters that gives me hope this line may go a bit deeper than many other DC lines. 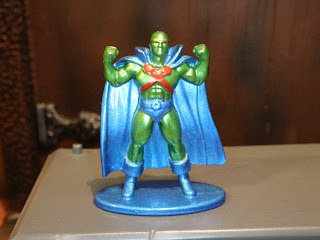 
* Martian Manhunter is another rocking minifigure. Check out how good he looks with that metallic green and blue. That is an incredible looking minifigure of J'onn J'onzz. I especially love the "pirate boots" he's sporting. 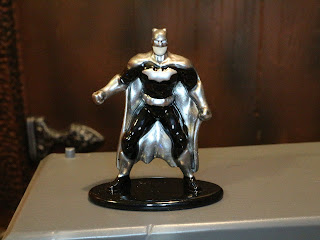 * This is the third time we've seen this sculpt but Jada Toys has always given it a unique paintjob thus far. While both five packs came with paint variants of this one (classic blue and grey and the Flashpoint/ Thomas Wayne version). For a $1, I don't mind paint variants at all, especially on Batman. This is a really slick black and silver suit that seems like it'd be useful in the Caped Crusader's armory. 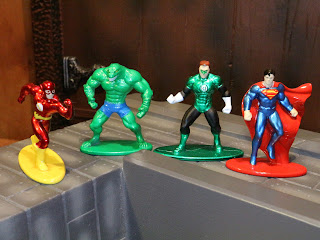 *I've  aleady reviewed these four figures, so check out those previous reviews: 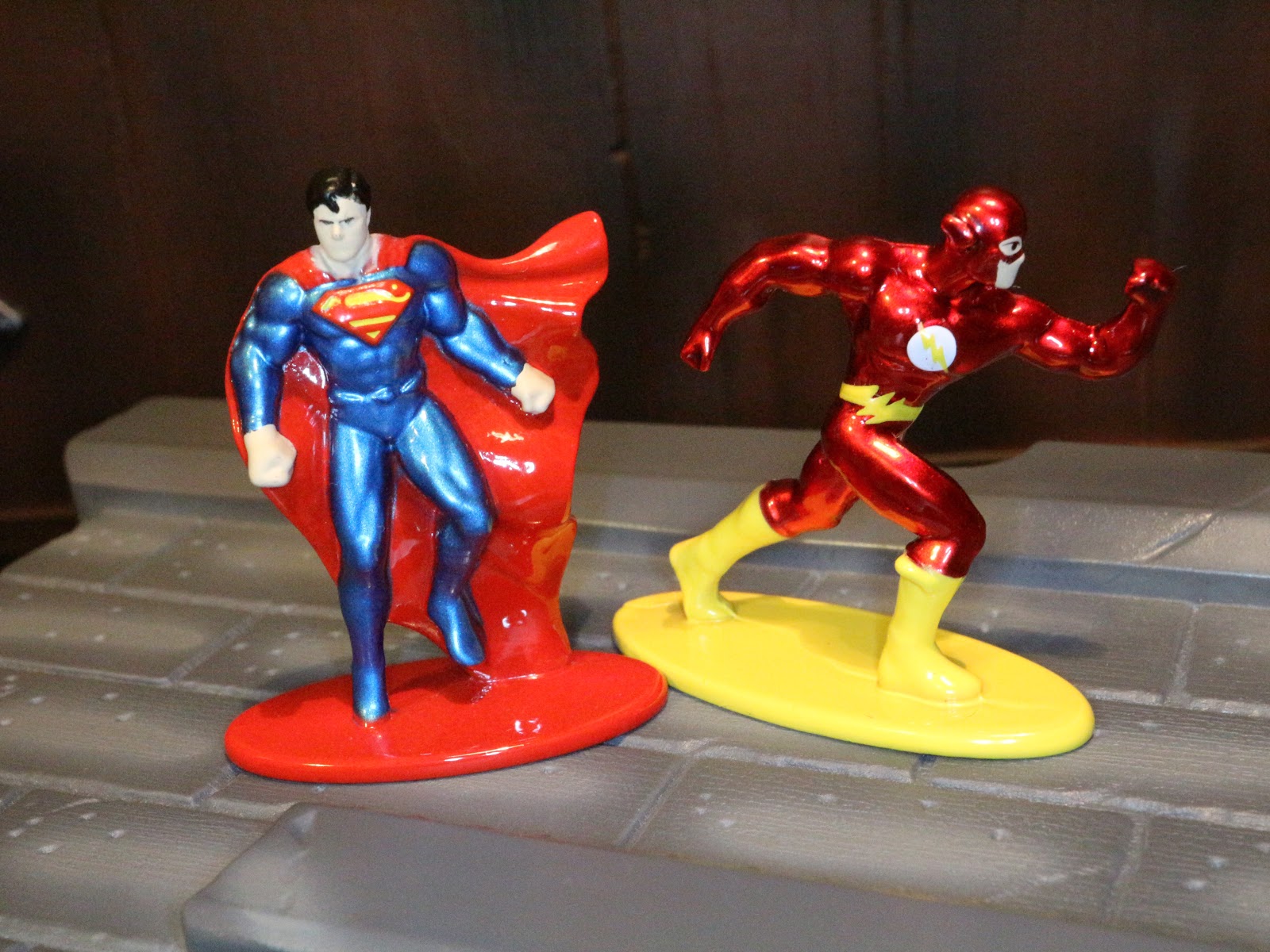 * If you're trying to collect this entire line, you're going to end up with duplicates. Both the 5 packs and this 10 pack include figures of Superman and the Flash. Considering Batman keeps getting unique paint variants, wouldn't a Reverse Flash or regeneration suit Superman have been better additions? 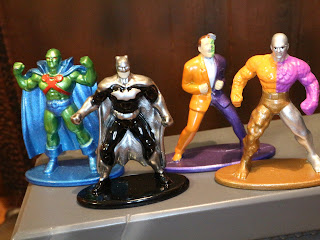 I'm absolutely loving this series. They're simple but very, very fun. Jada Toys has done a great job with this line and I'm hoping that they can capitalize on the popularity of Justice League to keep the figures rolling out. There are plenty of A-list DC characters still not released yet (Batgirl, Power Girl, Penguin, Catwoman, Robin, Nightwing, Deathstroke, and plenty of others) plus minor characters that may be a better fit for this format. DC and minifigures are both in right now, so let's hope we can really build a substantial DC Universe with this line. I'm giving this set a Great!

While I own a number of Killer Croc figures, I've only reviewed a few of them on here: The Arkham Origins Killer Croc, Mattel's Suicide Squad build a figure Croc, the Imaginext K. Croc & Swamp Skier, and the Nano Metalfigs Killer Croc DC10.

If you're looking for more Flash collectibless, check out my review of the Mezco One:12 Collective The Flash, the Multiverse Flash from DKR2, the Lego DC Universe Riddler Chase which comes with a minifigure Flash set, the Lil Bombshells Flash (Jesse Quick), and the Nano Metalfigs Flash by himself or as part of Five Pack A!

Two-Face is another Batman villain whom I own plenty of figures of but have only reviewed a few times on here: "Dual Destruction" Two-Face from Mattel's Batman: Power Attack line and the Pirate Batman and Pirate Two-Face two-pack from Kenner's Legends of Batman line.

These are the first figures of Metamorpho/ The Element Man and Martian Manhunter I've reviewed on Action Figure Barbecue.

Of course, I've reviewed so many Batman figures that the guy has his own archive. For dozens more Batman reviews, check out the Dark Knight Gallery!

If you're looking for more Nano Metalfigs reviews, check these out: