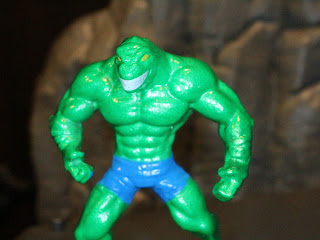 Here's the third figure from my first pickup of DC Nano Metalfigs from Jada Toys: Killer Croc! Waylon Jones has been many things: A man suffering from reptilian atavism. A murderer. Defender of the homeless. Roy Harper's AA sponsor. Arkham inmate. A member of the Suicide Squad. And, now, he's a tiny die-cast metal minifigure. To be honest, Croc is the guy who sold me on this line. Not only is he a cool minfiigure but he's not a character we see all the time in merchandising, thus his appearance in this line gave me some confidence that Jada Toys might be willing to go beyond the standard DC roster and possibly offer us a few surprises. I'm all about minifigures and Batman villains, so I was more than willing to drop 97 cents on this big fella. Er.. I mean little fellow. A small depiction of a big guy; how does that work? Let's check this guy out after the break... 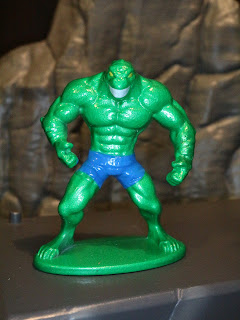 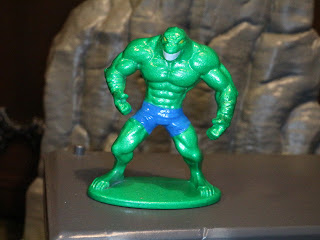 * On my monitor, the picture of Croc to your right is just about lifesize. He's definitely a minifigure but he has a nice amount of heft to him and he certainly looks more massive than most other characters. I love his bright green skin, too. The metallic paint seems to be one of the design aesthetics of the line and it absolutely makes for some nice shelf presence. The paintwork on he face it what it is; it gets the job done at this scale. 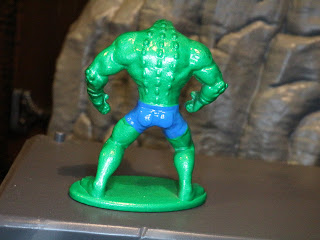 * Look! Killer Croc is wearing jean shorts! He shares the same fashion sense as Dr. Tobias Funke! I'm digging the sculpt on Croc, though, as all of the ridges and such on his bag look awesome. He's a real beast of a mini. I'm still not sure I like that the base is the same color as the rest of the figure, but that's just a personal preference. 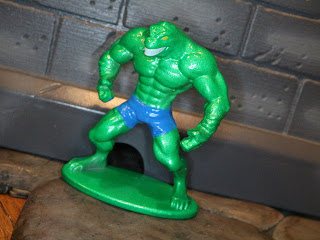 This is another cool mini. He's not as cool as the Flash, but he's definitely eye catching and should appeal to a larger crowd due to his usefulness as both a DC comics villain and a plain ol' creepy crocodile monster. I love the aesthetics of this line, particularly the die-cast metal aspect. There is a nice selection of characters at a very enticing price point (I paid 97 cents each) which makes for a fantastic collectible series. Killer Croc is a great minifigure and well worth tracking down, even if you gotta crawl through the sewers to find it.

While I own a number of Killer Croc figures, I've only reviewed a few of them on here: The Arkham Origins Killer Croc, Mattel's Suicide Squad build a figure Croc, and the Imaginext K. Croc & Swamp Skier.