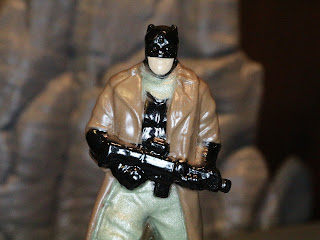 A week or two ago I stumbled across something pretty cool at my local Wal-Mart: An end cap of Nano Metalfigs from Jada Toys. Coming in at less than a dollar (.97 cents in my area), these small die-cast metal minifigures definitely appealed to me as an impulse buy kind of item. How often can you truly find any cool toys for less than a dollar? While Jada Toys has been putting out lots of die-cast metal figures from a variety of licenses in a larger scale, the Nano Metalfigs only cover three licenses currently: Harry Potter, Marvel Comics, and DC Comics. Being the huge DC fan and collector that I am, you know that I just had to pick up a few of these. First up in figure # DC2: Desert Batman from Batman v. Superman. Yeah, it's weird that he's called Desert Batman here since everyone else calls this outfit Knightmare Batman, but it's obvious this is the outfit from Bruce's vision in BvS. I love this costume so, for a buck, I decided to pick him up (along with a few others). Let's check out this tiny, solid steel Dark Knight after the break... 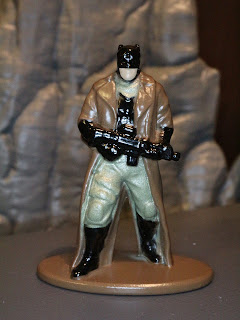 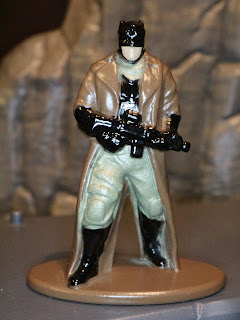 * So, first things first these are fully painted die-cast metal figures. That's pretty cool in and of itself. The paintjob might not be super incredible but considering these are a mass market item selling for less than a dollar, I'm satisfied. I do think that this is one of the weaker figures I saw, but I'm a sucker for the design. The gun is actually fairly detailed (it's not just a black blob) and individual costume elements such as Batman's knee pads and the ears on his cowl are clearly visible. The color palette is simple (only four colors) but that's fairly accurate for the suit. 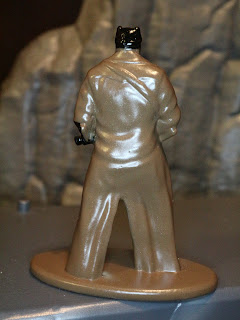 * The pose is a bit stiff, which might be what makes this figure seem less interesting than others in the line. While I prefer a fairly neutral pose for M.U.S.C.L.E. styled minifigures, figures like this that include a base definitely benefit from a more exaggerated pose. These definitely remind me more of something like a Heroclix miniature than a M.U.S.C.L.E., though, so I would have liked to seen a bit more of a dynamic pose. 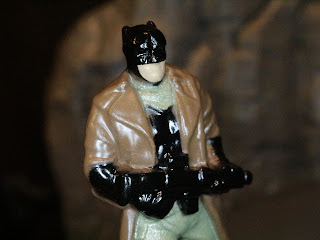 Considering what you're getting, I definitely think that Desert Batman is a decent buy for less than a dollar. He's certainly not the best figure in the set, though, so your mileage on this guy is really going to be based on your love of the costume. The DC Nano Metalfigs cover a few different areas of the DC Universe, including the comics, animated Universe, and the current film universe. He's an Eh and a 1/2 minifigure and the sheer novelty of this item very well might make you feel like your dollar was well spent, although he's not going to wow you. I'm going to be reviewing quite a few of these little guys over the next week or two, so keep checking back!


Do you like Batman? If so, check out all of the various Batman toys and collectibles I've reviewed on here!
Posted by Barbecue17 at 7/14/2017