Action Figure Review: Captain Carter from Marvel Legends Series: What If? by Hasbro 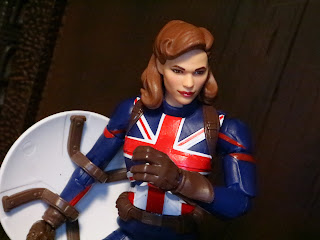 Not too long ago I found the three figures I was looking for in the newest series of Marvel Legends figures based on the Disney+ series What If? and I'm going to review all three of them over the next day or two. Let's start off with the figure I most wanted from this series: Captain Carter! What If? was a very fun show that ended up being a pretty impressive piece of MCU entertainment despite also kind of being its own thing, too, and while there were lots of great characters in it Captain Carter still stands out as my favorite "new" element of the show. Hayley Atwell returned to voice a Peggy Carter who ends up taking the super-soldier serum after Steve Rogers is shot by a Hydra agent and becomes the Union Jack wearing Captain Carter. She's a pretty incredible looking figure and due to the somewhat animated style of the line I think she'll fit right in with my Marvel Legends collection that is mostly comic based. Let's take a look at Captain Carter after the break... 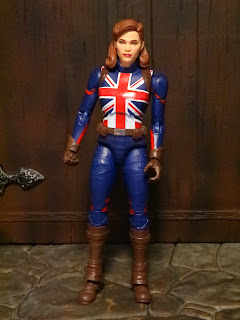 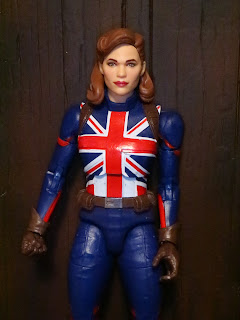 The Positives:
* Captain Carter looks incredible in her super-soldier suit. She's sporting a darker blue suit with some red highlights, brown leather boots and gloves, and a bright, bold Union Jack on her torso. Her outfit looks suitable to the World War II era while also retaining enough of a modern edge that she could fit in to any period and look great on your shelf next to most current characters. 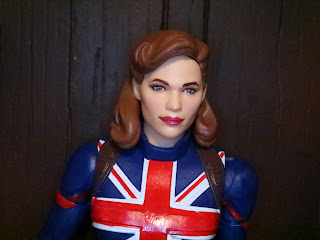 * Hasbro tried to match the What If? based figures with the animation style of the show meaning that they're not quite realistic like the MCU based figures but that they're more realistic than the standard comic based figures. It seems to have upset some folks but I think it allows them to be worked in with most collections. I'm adding this gorgeous Captain Carter to my comic based collection and I think she'll fit perfectly. The likeness to Hayley Atwell is excellent while still keeping an animated edge. 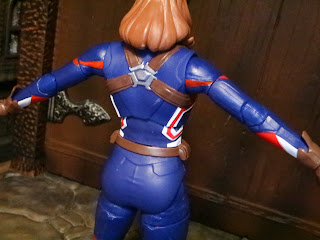 * The back of her outfit is fairly detailed as well. I really like the straps she wear, presumably for toting her shield around (though they're not functional or anything). 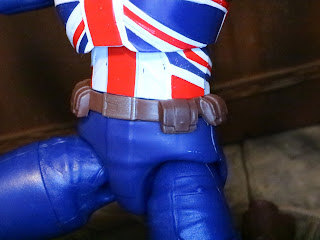 * The WWII styled gear pouches on Peggy's belt are also cool. Probably useful for carrying all kinds of spy gear. 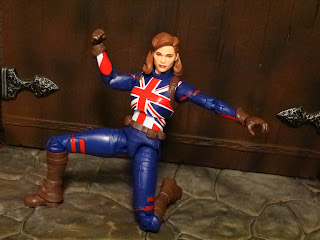 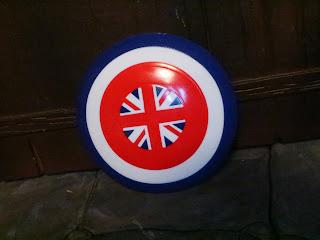 * Peggy comes with her shield. it's similar to Captain America's but instead of an American themed motif she instead is sporting a Union Jack design. It's a sharp paint application and looks fantastic. 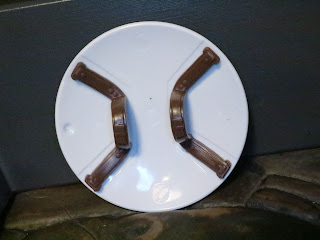 * Rather than the hinged clip of some shields Captain Carter has "leather" straps on the back of her shield. It looks great and functions very nicely, keeping the shield on her arm with no risk of breaking a clip. 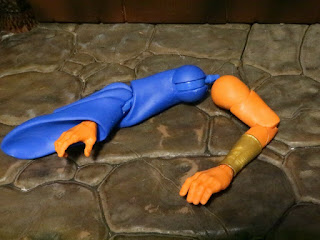 * Uatu the Watcher is the build-a-figure for this series and Captain Carter comes with his arms. I sold mine off since I wasn't planning on building him but he does look like he'll be a pretty cool figure. 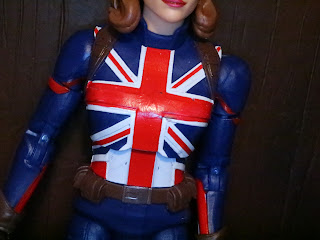 The Negatives:
*Sadly there is some really sloppy paintwork on the Union Jack on Captain Carter's chest. The blue seems to be bleeding through quite a bit and it makes things look pretty rough up close. 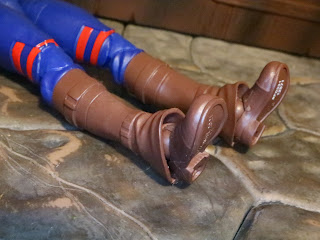 * My figure has a problem with Peggy's right ankle. The hinge joint is either stuck or fused but due to the way her boot covers it (which itself is a cool feature) it's difficult to get it unjammed. Anyone else have an issue like this? I'll probably have to heat up the ankle and remove the joint to fix it. 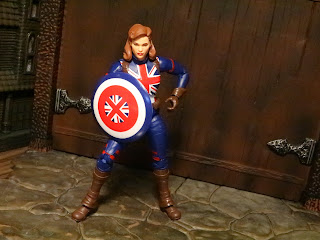 Despite the flaws on my figure (one of which I should be able to easily fix) Captain Carter is still a Great figure. She looks fantastic, has a beautiful headsculpt, and her shield is a nice extra. I wish her Union Jack were a bit cleaner as she'd easily be one of the best Legends of the year with a bit more polish. She was the only figure on the shelf when I found her and its doubtful most of us will run into more than one of her at a time to pick the best paintwork. I've got two more figures from the What if? series coming in the next day or two, so stay tuned...
This is the first figure of Agent Peggy Carter/ Captain Carter I've reviewed. For more reviews from Hasbro's Marvel Legends Series check out the following:
Marvel Legends Series by Hasbro (2016)
Crossbones
Darkstar
Enchantress (Mystic Rivals)
Firestar
M.O.D.O.K.
Nico Minoru (Mystic Rivals)
Ultron
Ursa Major
Marvel Legends Series: Avengers by Hasbro
Taskmaster