Action Figure Barbecue: Skeletor and Painthor from He-Man and the Masters of the Universe by Mattel 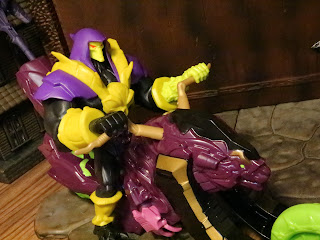 About two weeks ago I reviewed my first figure from Mattel's new toyline, He-Man and the Masters of the Universe, based on the CG animated Netflix series of the same name. I'm about 5 episodes into the show (I didn't binge it like I did with Revelation) and so far I'm enjoying it. It's a very different take on the Masters of the Universe story but I'm enjoying it along with the characters and character design. Of course, you're here to read my take on the toys so let's start what is going to be a fairly length review series of most of the figures released as part of the first series of the line. I've already reviewed the "figure and motorcycle" set of He-Man and Ground Ripper so let's take a look at the evil counterpart, Skeletor and Panthor. Yes, Panthor. Rather than being a purple cat similar to Battle Cat/ Cringer (who is awesome in the show) the toyline's take on Panthor is that he is a purple, feline styled motorcycle. Oh boy. At this point I don't have any idea if this shows up in the actual show (I haven't seen any evidence of that yet) or if this is just a Mattel creation for the toyline. Skeletor on a motorcycle, huh? Let's see how that worked out after the break...
"Update: So it turns out that the multilingual packaging lists this set as Skeletor and Painthor/ Panthor. I initially thought that this was clearly referring to the cycle as Panthor but it seems that the English name is Painthor, a play on Panthor. So, the bike is officially the Painthor. I was wrong." 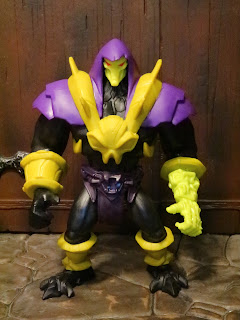 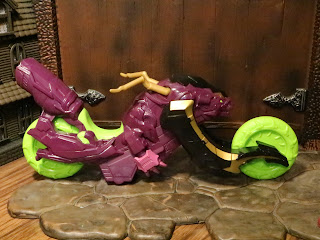 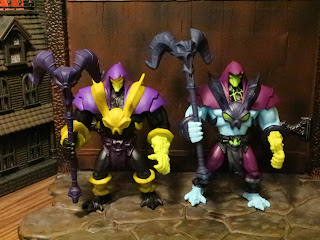 Comparison:
* Here's a quick look at the Skeletor included with this set (on the left) and the standard Skeletor (right). The colors are different as this Skeletor has fewer paint applications and seems to be done up in his Disco Skeletor outfit. otherwise these guys are the exact same figure. 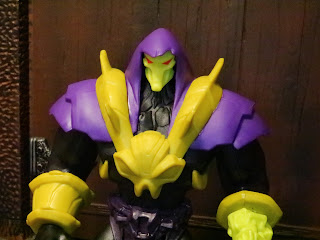 The Positives:
* I really like the Skeletor design on the show and this figure doesn't do a bad job of replicating the sculpt of it. It's a very stylized toy and, as I mentioned above, this version is a paint variant of the standard figure. It's quite cool looking with some neat work on the armor. 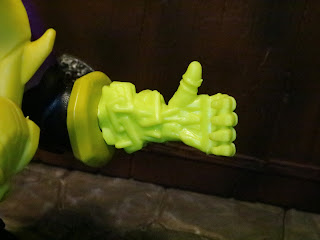 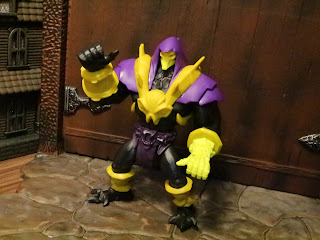 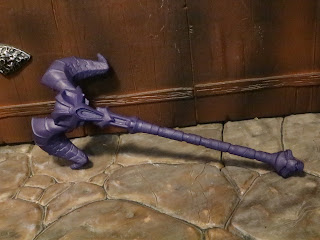 * The Havoc staff is incredibly powerful in He-Man and the Masters of the Universe and grants Skeletor a great deal of power. It's one of two totems once held in Castle Grayskull though it's cursed as it represents the force of havoc. The sculpt is really nice on the front of this with very pronounced horns on the ram skull. 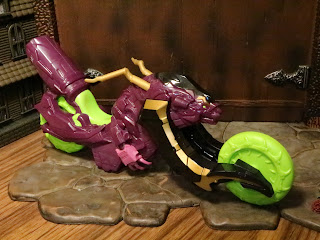 * Let's take a look at Panthor who is now inexplicably a motorcycle. Again, I don't think this is something from the show (it hasn't appeared in the first 5 episodes at least). Actually, there was a purplish shadow version of Battle Cat in one episode but it was a magic spell and not a motorcycle. The bike looks cool, though. I love the purple and green. It reminds me of the Kenner Joker Cycle which was also goofy but still pretty fun. 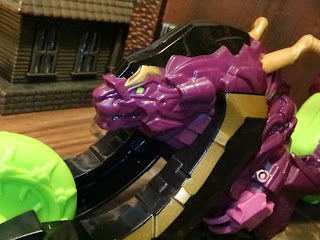 * The front of the motorcycle is given a cat-like design which really does fit in with most other Masters of the Universe vehicles. They tend to have an animal theme most of the time. Even the eyes are given a green paint application, just like the real Panthor. 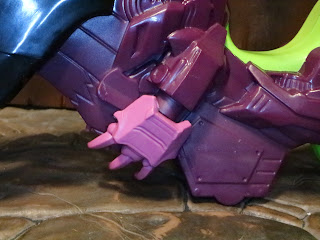 * Thee are some claws along the bottom. They're just for looks and don't serve a purpose, though. It would have been really cool if the claws were removable and could be used by Skeletor as weapons. 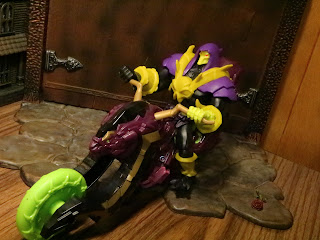 * Skeletor looks pretty gnarly on this bike. He's born to be wild, baby. The handlebars swing in and out to help align him just right (or any other figure who needs a ride). Think we'll get a biker Evil-Lyn to go along with him? Or Beast Man in a sidecar? 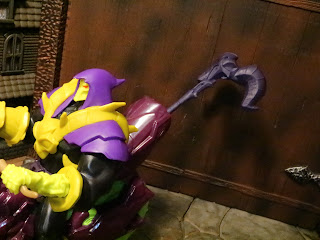 * I'm pretty sure that the hollow space at the back of the bike is intended to store Skeletor's Havoc staff when he's busy riding and needs his hands free. It's kind of wobbly and goofy but it does work and looks a bit like a flag or something on a motorcycle of this sort. Just don't try this trick on the real Panthor. That's how you loose an arm. 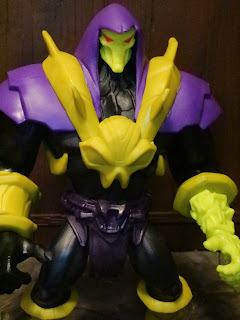 The Negatives:
* OK... so first, I want to point out that this Skeletor is missing lots of paint applications that the single packed figure has. He really looks very unfinished. I love the character designs in the Netflix show but this isn't a very good translation of the design as it just looks very bland. I understand that Mattel is mostly targeting these as kids rather than collectors but, c'mon, when you put out stuff for a property like MOTU you know a large chunk of your audience will be collectors who remember these characters from childhood. A bit more care could have been nice. 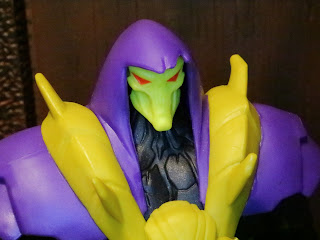 * I don't dislike the look of Skeletor but there's no detail visible on his face. Some paint applications or something are really needed to help keep everything form just blending into a formless mass. The details present are so slight that you can hardly notice them. 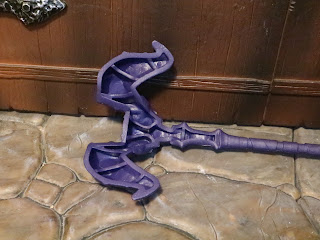 * I like the Havoc Staff from the front but flip it around and you've got... well, this. It's not even sculpted the entire way around! That's a bit of cutting corners, isn't it? 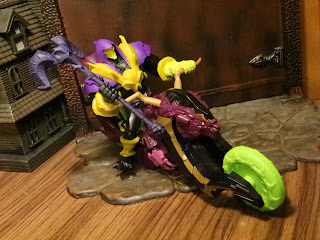 I really think this Skeletor figure is pretty weak but, surprisingly, I really like the Panthor cycle. Not anywhere as much as an actual kitty Panthor, but it's still executed pretty nicely. Considering this is a kids toy, though, for $20 bucks you're getting an OK action figure and a pretty neat motorcycle. That ought to make quite a few kids pretty happy. I'm giving this set a Good and a 1/2 rating. Plenty of MOTU fans will skip it but it has a bizarre charm that I can't quite put my finger on. I'm not expecting this version of Skeletor to show up in the cartoon riding a Panthor motorcycle, but if he does? I might just be pleasantly amused. We'll see. Verdict is still out.
This isn't Panthor, but if you're a Panthor fan I've also checked out Masters of the Universe Origins Panthor and Panthor (Flocked), the M.U.S.C.L.E. version of Panthor, the ReAction Skeletor and Panthor, the Mega Construx Panthor at Point Dread set and Skeletor & Panthor pack, the Dorbz Ridez Skeletor with Panthor, the POP! Rides Skeleton on Panthor #98 (flocked) and plain Skeletor on Panthor #98, the Pint Size Heroes Panthor, and Panthor and Panthor (flocked) from MOTU Action Vinyls.
I've reviewed so many toys of Keldor/ Skeletor that he has his own review archive. Check out Snake Mountain for all of my reviews of the Evil Lord of Destruction!
For more reviews from the Netflix He-Man and the Masters of the Universe line check out the following:
He-Man and Ground Ripper
Posted by Barbecue17 at 11/04/2021