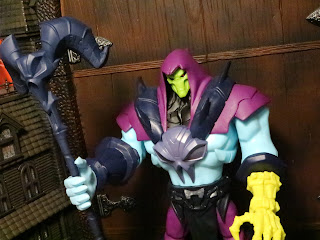 I'm really enjoying Skeletor in the Netflix series He-Man and the Masters of the Universe and I'm really liking this new design, too. It's still clearly Skeletor but there are some new ideas mixed with details from other Skeletor media interpretations (he reminds me of some of the depictions of Skeletor in the modern DC Comics MOTU series). So far though, I haven't been overly thrilled with the toys of Skeletor from this line. The sculpts are pretty good but the paint work has left a lot to be desired. Today I'm checking out the 8.5 inch Skeletor with some optimism that the larger scale might fix the problems of his smaller line mates. Will this be a hit or a miss? Let's find out after the break... 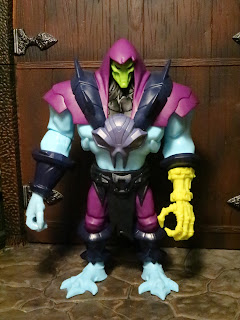 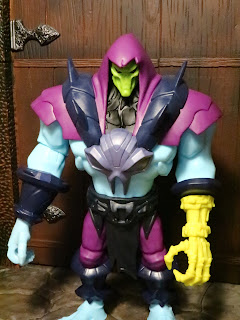 The Positives:
*  I really like the Skeletor design on the show and this figure doesn't do a bad job of replicating the sculpt of it. It's a very stylized toy with a simple paintjob and a clean sculpt. I really like how Skeletor's armor looks like the ram skull with the horns wrapping around his shoulders. That and the snake on his belt are fantastic details though, sadly, this guy is missing the green paint highlights of the smaller 5.5 inch figure. 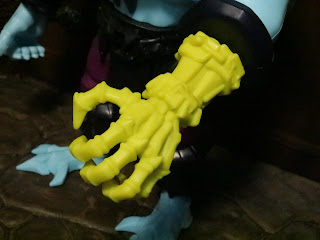 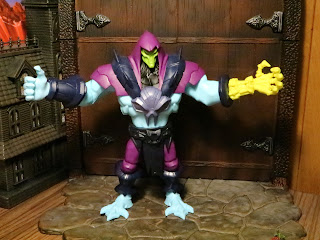 * While the legs are just swivel/hinge joints with swivel ankles, the arms do have much more articulation than the smaller figure did. The 8.5 inch Skeletor has swivel/hinge shoulders, a swivel/hinge right elbow, and swivel wrists. Well, the skeletal hand has more of a swivel forearm, but still, it's not bad. For an oversized kids toy it isn't bad. He's also very durable which is important for something kids are expected to smack around. 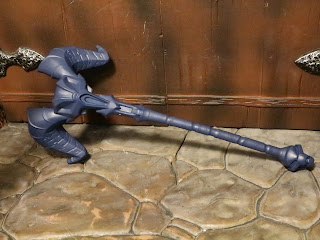 * In He-Man and the Masters of the Universe the Havoc staff is one of two totems once held in Castle Grayskull, though it's cursed as it represents the force of havoc. The sculpt is really nice on the front of this with very pronounced horns on the ram skull and a more wicked looking Graykull-like skull at the bottom of the shaft. 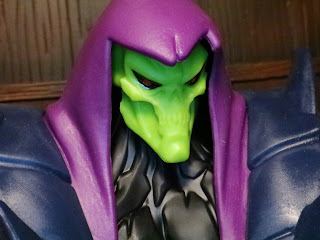 The Negatives:
* I like this Skeletor design but the way this is simply just molded in neon green plastic washes away all of the detail. This could have been excellent but Mattel cheaped out and it shows here. They just needed to use a little paint, a drybrush effect, or light wash to let those details stand out. 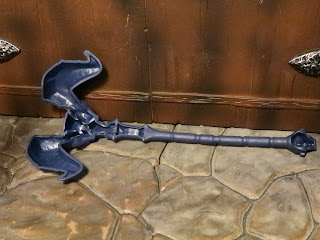 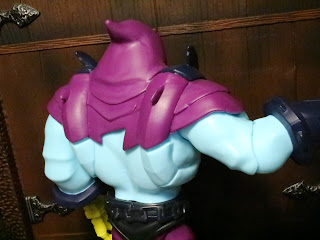 * Does this figure have missing paint applications? Heck yes, he does. See the ram skull horns that wrap around his back? Yeah, there is no paint. They're just purple and blue. How lame! 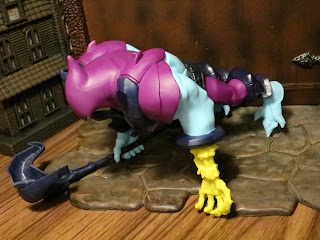 * I'm in such a bad mood that I'm making Skeletor get down and give me 20! Wait, no, it's actually because this guy tends to fall over way too easily. His feet are hollow which may contribute to the problem of keeping him standing upright. I wouldn't be surprised to learn that the Filmation Skeletor designed this figure as part of an evil plot to get back at the kids of Earth. 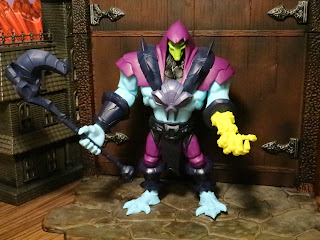 * I rarely give figures a review this bad but I gotta say that this Skeletor figure is pretty shoffy. I love the design, too, so that hurts even more because he could have been great. He's got a half molded weapon, almost no paint applications, and the figure is designed so he can barely stand. Folks, I don't often dole out Crap and a 1/2 ratings but that's what Skelly is getting here. Everything good about this figure is negated by something else done on the cheap. Ignore this guy. Leave him on shelves. Don't make the same mistake I made! He's an embarrassment to the name Skeletor.
I've reviewed so many toys of Keldor/ Skeletor that he has his own review archive. Check out Snake Mountain for all of my reviews of the Evil Lord of Destruction!
For more figures from Mattel's He-Man and the Masters of the Universe line check out the following:
5.5 inch
Chaos Snake Attack
He-Man
He-Man and Ground Ripper
Man-At-Arms and Sky Sled
Skeletor
Skeletor and Panthor
Trap Jaw
8.5 inch
Battle Armor He-Man
He-Man
Man-At-Arms
Posted by Barbecue17 at 11/11/2021