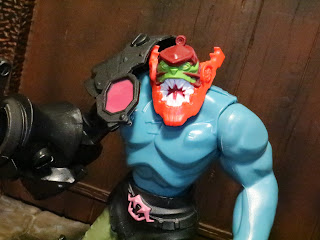 The marathon of He-Man and the Masters of the Universe reviews continues and today I'm reviewing a figure that's neither He-Man nor Skeletor: It's Trap Jaw! I've only watched 7 of the 10 episodes available so far and, as of yet, I haven't actually seen Kronis turned into Trap Jaw yet. In the Netflix series He-Man and the Masters of the Universe Kronis was once the Man-At-Arms to King Randor before conspiring with Keldor and Evelyn to overthrow Randor. When the series begins Trap Jaw is still Kronis and he's working with Eveleyn and his young apprentice, Duncan, to get revenge on Randor. The show does a great job of fleshing out Kronis/ Trap Jaw and he's one of the best villains on a show that has had very strong villains so far. The Evil Warriors ought to be proud of themselves and I'm hopeful that this toyline lasts long enough to get us non-transformed versions of the villains, too. Keldor, Kronis, Evelyn, and R'Qazz all have fantastic designs. Trap Jaw is definitely recognizable from his vintage toy and from other MOTU media, though, and he's the only help Skeletor has in series one of the toyline. Let's check him out after the break... 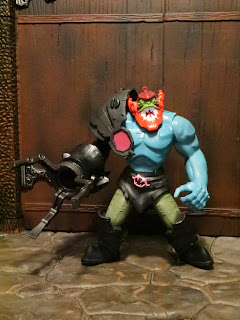 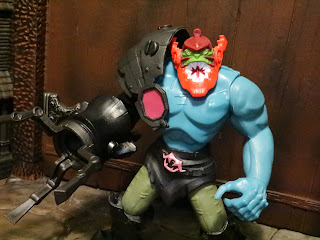 The Positives:
* Trap Jaw is easily recognizable and looks pretty monstrous in this version. Blue skin, massive arm, and lots of scars and stuff? That's Trap Jaw for you! He's one of the best looking figures in the line so far and Mattel did a nice job of translating him from his onscreen appearance to an action figure. There's not a ton of paintwork here but what is here is clean and sharp. 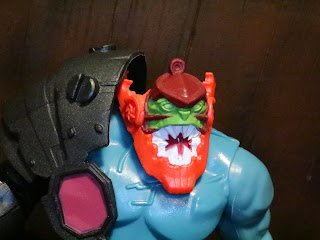 * Trap Jaw's head is quite cool. It's very intimidating with a large, open maul with a circle of sharp teeth. That's pretty creepy! His helmet is a different color than his jaw so there's some nice differentiation here. I'm also loving his creepy yellow eyes. 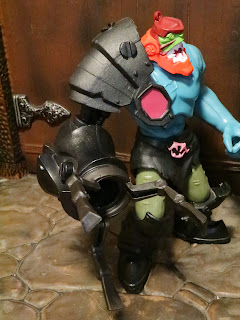 * Trap Jaw's robotic arm is enormous with a massive claw on the end. The claw does come separate in the package so you'll have to pop it on. It's a one time assembly thing, though, so it isn't removable after you've popped it on. I do miss the multiple weapons of pretty much every other Trap Jaw ever made but the arm has some nice detail like massive screws and rivets keeping it together. 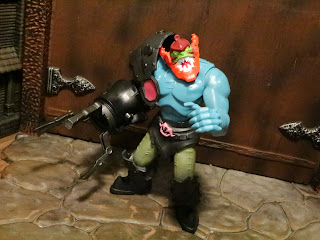 * I don't like that these figures only have swivel shoulders but everything else I'm OK with. Trap Jaw feels very sturdy and the Power Attack feature is pretty cool. Essentially, the mid-torso joint is a spring-loaded balljoint. Twist him left or right and his upper torso springs back. Pull his torso back and he springs forward. It definitely feels like an upgrade of the action waist feature on the vintage figures and makes these fun to mess around with. 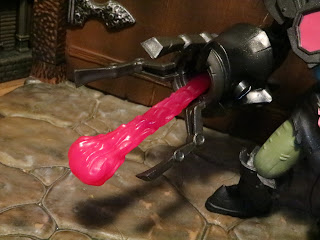 * Trap Jaw comes with an energy beam that you can place in his claw arm. It's a "flick fire" kind of weapon and you can either flick it to launch it or you can pull his "Power Attack" mid-torso joint to the side and let it go, causing Trap Jaw to "launch" the projectile. It's kind of fun and shows off the versatility of the "Power Attack" features. 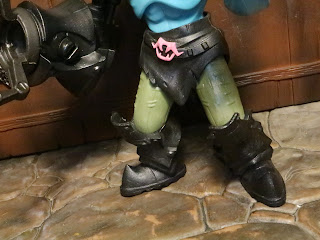 * Trap Jaw's boots are very menacing with a very medieval feel to them. He's also sporting some pants that look like they've been stitched back together. That's a cool detail. 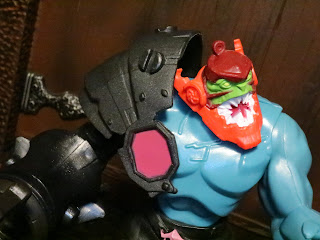 The Negatives:
* Trap Jaw's massive pauldron does get in the way of his articulation a bit. It's a larger, soft overlay and when you lift and lower the robotic arm the pauldron tends to catch on his head. Oops. 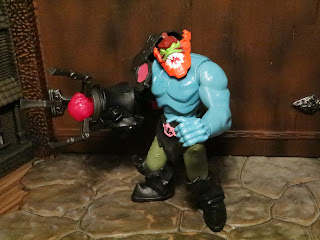 I'm really liking Trap Jaw. For the $10 dollar asking price he's not a bad alternate version of the character. The headsculpt is really cool and I have to admit that I love launching the energy burst at other figures using the Power Attack figure. I believe Trap Jaw and Man-At-Arms only come one per case and it's either Trap Jaw or Man-At-Arms, so they're both a bit of a pain to find (I still haven't found the basic Man-At-Arms yet). He's a Great figure and definitely one of the highlights of the line so far.
Are you a fan of Trap Jaw/ Kronis? Then check out Trap Jaw's Tourist Trap, an archive of all of my Trap Jaw related reviews!
For more He-Man and the Masters of the Universe reviews check out the following:
5.5 inch
Chaos Snake Attack
He-Man
He-Man and Ground Ripper
Skeletor
Skeletor and Panthor
8.5 inch
Battle Armor He-Man