Action Figure Review: Man-At-Arms and Sky Sled from He-man and the Masters of the Universe by Mattel 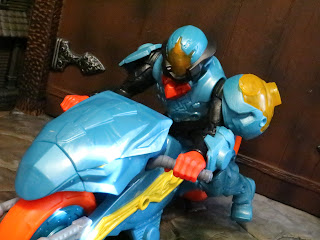 Today I'm looking at the third of the bike and rider sets from Mattel's He-Man and the Masters of the Universe line and this time it's Man-At-Arms and the Sky Sled. I was kind of surprised when I stumbled upon this guy at my local Walmart a couple weeks ago as I didn't even realize that this set was available. I still haven't found the standard 5.5 inch Man-At-Arms figure yet so I was extra excited to stumble upon this guy. While He-Man and the Masters of the Universe is really built around a team of heroes, the first series relies very much on He-Man and Skeletor though there are three Man-At-Arms items available currently. In the new show Duncan is about the same age as Adam (he might be a little older) which is a huge change from how the character has always been portrayed. Initially Duncan is the assistant to Kronis (who was once the Man-At-Arms for King Randor) but soon joints up with the Adam and the other heroes. Once Adam/ He-Man discovers how to power-up his friends with the Power of Grayskull Duncan armors up and takes on the name Man-At-Arms for himself. This version of the character is wearing blue armor which seems to be a made up variant for the toyline and he's riding the Sky Sled, which doesn't look at all like the Sky Sleds from the show. How weird that Mattel is making stuff up already from a show that has pretty solid character and vehicle designs, huh? Let's check this set out after the break and see how it compares to the rest of the line so far... 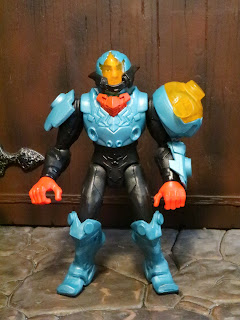 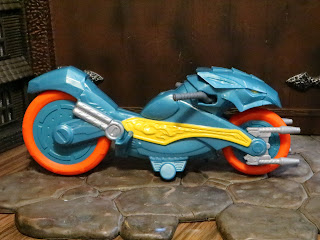 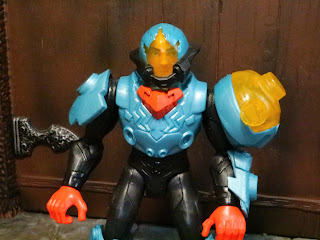 The Positives:
* I really like the look of the figure. With the blue armor here it's tough to tell but it really does look like a more upgraded version of Man-At-Armor's classic armor. The blue and black is a cool color combination. The armored pieces have a nice amount of detail for the style of the line and there is even some detail on his black bodysuit. 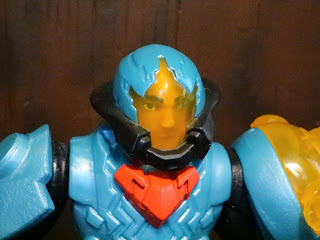 * The top of the helmet slightly resembled MAA's classic helmet but he now has a full face shield over his head. Even better is the fact that you can see through the shield and Duncan's face is visible inside. That's a pretty neat detail that definitely elevates this guy above the other figures in the line. Hopefully the guy grows a mustache in the next season. 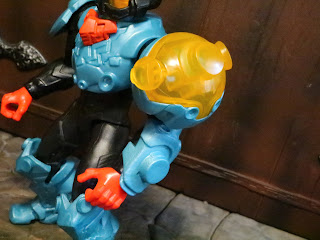 * Duncan's oversized pauldron also utilizes the translucent plastic of the visor to give it a "powered up" look. The oversized armor definitely reminds me of the 200x Man-At-Arms design. 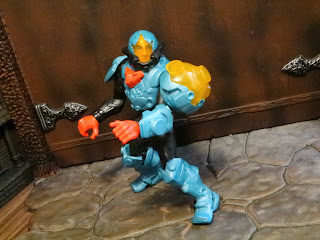 * Man-At-Arms is built like most other figures in the line and while I don't like that these figures only have swivel shoulders, I'm pretty OK with everything else. Duncan feels very sturdy and the Power Attack feature is pretty cool. Essentially, the mid-torso joint is a spring-loaded balljoint. Twist him left or right and his upper torso springs back. Pull his torso back and he springs forward. It definitely feels like an upgrade of the action waist feature on the vintage figures and makes these fun to mess around with. His knees are slightly preposed to better ride the Sky Sled but it's not terrible. 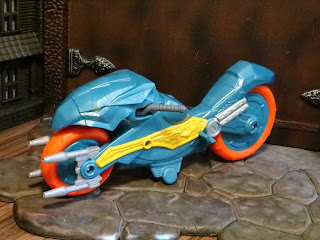 * The Sky Sled doesn't look like the Sky Sleds from the show but the colors and the headpiece do make it look like the vintage Sky Sled, but redesigned as a motorcycle. Why would a wheeled vehicle be called the Sky Sled? Who knows? It is a sharp looking vehicle, though, and it follows in the long tradition of toy companies putting the main characters from toylines on motorcycles just to sell toys. I guess kids just love motorcycles or something? 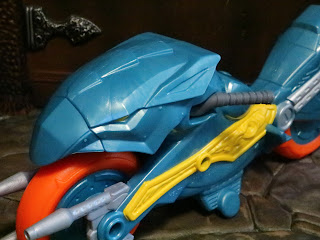 * The front of the Sky Sled does look like the vintage toy with an animal/ avian styled headpiece. The metallic blue color is just excellent, too, and really helps this to stand out on the shelf. 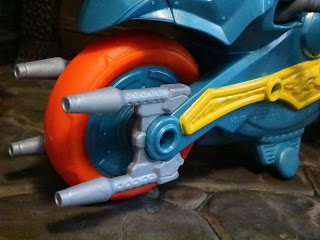 * Unlike He-Man and Skeletor's bikes, Man-At-Arms' Sky Sled does have some offensive weaponry. There are two mounted laser cannons on each side of the front wheel. 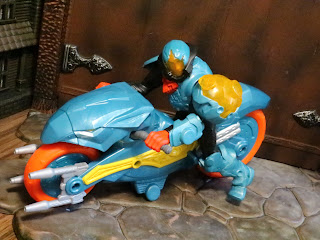 * Man-At-Arms fits nicely on the bike. He has a tight grip and the handlebars are hinged so they can be positioned in just the right place. 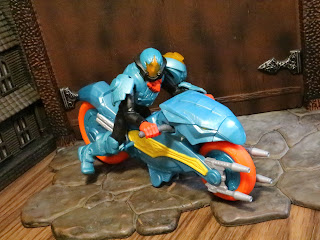 Man-At-Arms might not be the most exciting nor the most accurate release from the new He-Man and the Masters of the Universe line but I really do think it's quite fun. Man-At-Arms might be the best made figure in the line and I like how the Sky Sled turned out despite it looking nothing like a Sky Sled from the vintage line nor from the cartoon. Still, it's a fun toy and for the price it's not bad. I'm really curious if these will catch on with kids this year. Christmas shopping seems to already be in full swing so we'll see if parents clear the shelves of these for the little ones or if it's just us old schoolers picking up the new He-Man toys.
I've reviewed so many toys of Duncan/ Man-At-Arms that he has his own review archive. Check out the Man-At-Armory for all of my Man-At-Arms reviews.
If you're a fan of the Sky Sled/ Jet Sled/ War Sled I've also reviewed the vintage Battle Ram which had the Sky Sled as a detachable piece, the Mega Construx Battle Ram, the Sky High & Jet Sled set from Masters of the Universe Classics, the Hot Wheels Premium Battle Ram, the MOTU Revelation Eternia Minis Beast Man & War Sled, and the Prince Adam & Sky Sled set from Masters of the Universe Origins.
For more reviews from He-Man and the Masters of the Universe check out the following:
5.5 inch
Chaos Snake Attack
He-Man
He-Man and Ground Ripper
Skeletor
Skeletor and Panthor
Trap Jaw
8.5 inch
Battle Armor He-Man
Here's a shot of a G.I. Joe Classified Series figure on the Sky Sled that was requested by a reader: 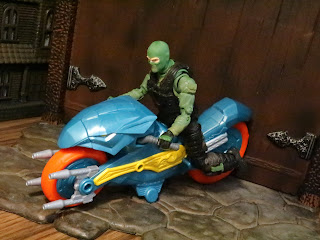