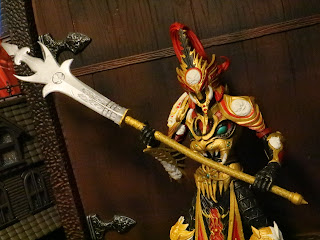 I've been kind of getting back into Spawn lately and most of the blame falls on the Reel Brad Bell from The Epic Review. Every time we talk on the phone Brad has been going on and on about Spawn. Spawn this and Spawn that. After him going on and on about Spawn I finally picked up the first volume of the Spawn Compendium and have been making my way through it. It's an enjoyable trip back to the 1990s when Spawn was new and cutting edge stuff and McFarlane Toys was a trailblazer in the action figure industry. While I never focused on collecting Spawn I do have quite a few action figures from the line as it was just too cool and impossible to ignore. I'm going to be reviewing the two figures I've purchased so far from McFarlane's revival of the Spawn line over the next couple days and I'm starting with the GameStop exclusive Mandarin Spawn Deluxe. Picking up this figure is something I can't blame on Brad, though. I purchased the original Mandarin Spawn back in 1999 and loved the heck out of that guy. I still have him, too. Mandarin Spawn was retooled, re-released, and repainted many times over the years but he originally appeared in Spawn: The Dark Ages, the 14th series of Spawn figures released in late 1999. He was one of the most impressive action figures ever at that time and I still keep him on my shelf on display. I received this guy back in September for my birthday but due to all of the 31 Days of Toy Terror reviews I've been working on it has taken me some time to check him out. Let's look at the deluxe release of Chenglei, better known as the Scarlet Edge or Mandarin Spawn, after the break... 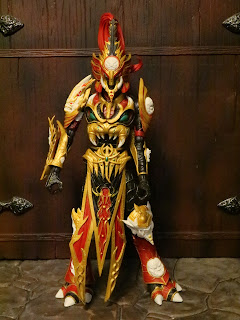 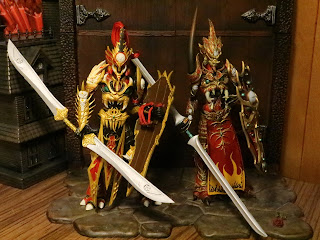 Comparison:
* The new Mandarin Spawn deluxe is on the left while the vintage Dark Ages Mandarin Spawn is on the right. While the newer figure is an update of the original, it's different enough that it doesn't feel like a straight redo. The articulation and quality on the new figure is incredible although the original figure may still have a more impressive sculpt and paintjob. It's just a very different kind of action figure, more statue than toy. 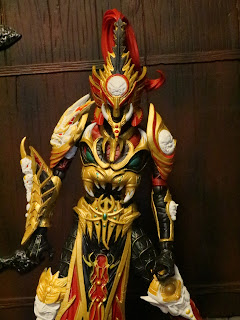 The Positives:
* The original Mandarin Spawn is still one of the most elaborately decorated action figures I've ever seen and this newer version definitely follows in that tradition. McFarlane has released three different versions of Mandarin Spawn this year and this one is the most elaborate. McFarlane has really upped the quality of their plastic in recent years and while it's softer and less brittle, the details are a bit softer and different than on older releases. Not worse, just different. this is also a fully articulated figure and not just a statue with a few points of articulation. The armor is incredible and does an amazing job of mixing a very fantastical Chinese styled armor (Mandarin Spawn hails from the Song/Sung Dynasty of 960-1279) with some Spawn-like elements. The paintwork is incredible and very cleanly applied without the intentionally over drybrushed look of many earlier McFarlane products. 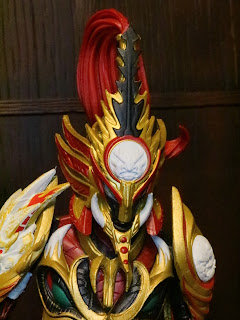 * All three figures in the new trio of Mandarin Spawn figures have different headsculpts and this one looks to be the most impressive, particularly due to the flared elements of the helmet and the flowing ponytail coming out of the top (that's molded in a rubbery red plastic, so it's not brittle at all). There's no specific Spawn logo or anything on this guy but he does have lots of decorative faces on his armor, including a large one on the brow of the helmet, and his glowing green eyes are visible through the front slits. 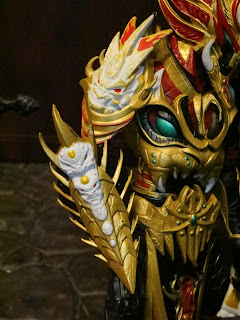 * When you think about how standard most action figure bodies are these days it's pretty fun to look over all of the unique and elaborate details here. The armor going down the body has so many unique faces and details and the molding is just excellent. Even the tiny "metal" spikes popping off of Mandarin Spawn's armor look sharp and neat with little bending or warping. 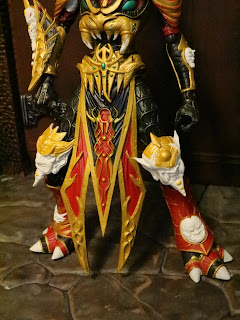 * The long robe hanging down in the front is very elaborately sculpted; that's not just paint or a tampograph. Also, the boots are incredible, further adding to the demon-like vibe of this warrior. I'm also a fan of the huge kneepads that look like some sort of yaoguai. This guy is just so fantastically designed! It reminds me of the time back when most action figures had fully unique sculpts and you saw more of these weird and cool little details on them. 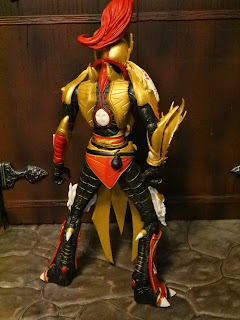 * Here's a look at the back of Mandarin Spawn so you can see all of the paintwork here, another cool face, the etched details in his armor, and the pouch hanging down from the back of his belt. You can also see the demon-like legs. This isn't just a regular Spawn in armor: This guy is definitely built for battle and to wear an outfit like this. 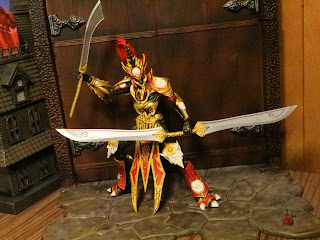 * One of the biggest changes of the new Spawn figures is that the articulation is really good. Each figure is built very uniquely and seems to have their own articulation model. The plastic has a really good feel to it and doesn't feel at all brittle or flimsy. I'm not sure I love the way that McFarlane is doing swivel/hinge joints but everything else is excellent and for the most part nicely blends in with the armor. Looking at this figure you might not even think that it would have articulation at first. He's really fun to mess around with, especially given the arsenal of weapons he comes with. 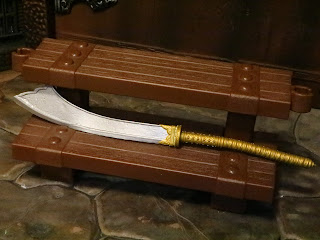 * I'm not an expert on ancient Chinese weapons or anything, so forgive me if I'm wrong, but I believe this is called a niuweidao. It's a really vicious looking (but beautifully ornate) sabre with a really long handle. That blend of elegance and lethality perfectly summarizes the beauty of the Mandarin Spawn design. 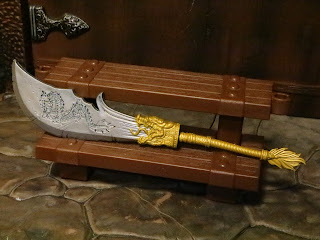 * I believe this is a guandao and while they usually tend to be a polearm with longer reach, I'm guessing Mandarin Spawn doesn't mind getting all up in someone's face. The blade is incredible. That dragon etched into the blade is just breathtaking as is the lion on the hilt. This might be the most impressive weapon in the set. 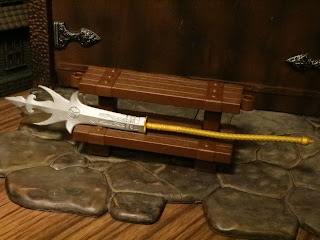 * This seems to be a fangtian ji, a halberd from the Song/Sung dynasty. It's quite long with an extremely long blade that's quite intricate. There's even a Spawn logo etches into the blade along with more dragons near the hilt. 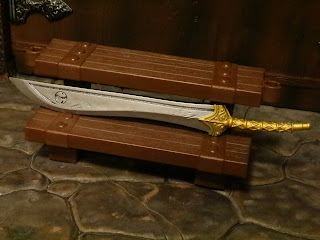 * The only weapon that Mandarin Spawn comes with that is similar to the vintage toy is this massive sword. It also has the Spawn logo on the blade along with some wear and tear from many battles. 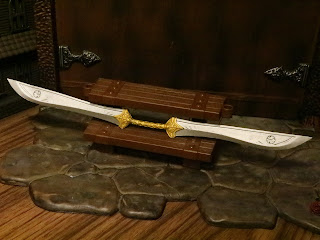 * There's a second blade that attaches to the first and you can make this long weapon that reminds me of the huge double swords Zidane used in Final Fantasy IX. This is my favorite weapon to display Mandarin Spawn with simply because it just looks so darn epic. 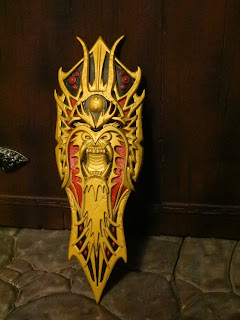 * A huge shield like this is another throwback to the now vintage figures. And yes, it pains me to call something that I purchased in high school vintage.This thing is awesome and looks like a dragon head with a long beard and big, angry eyebrows. 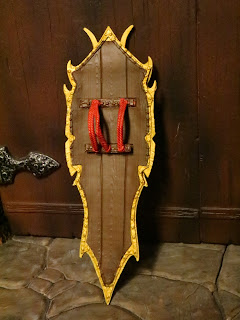 * Spin the shield around and there's some nice wood texturing on the planks along with some sculpted ropes to allow the shield to fit over Mandarin Spawn's left forearm. Heck, there's even rivets on the edges where the wood meets the metal. That's some super fine detail! 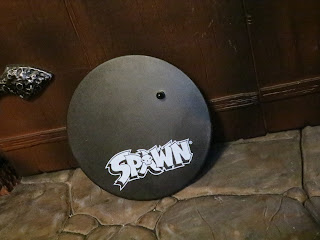 * Need an extra bit of stability for keeping Mandarin Spawn upright? The use this simple disc stand. I'm always a fan of stands and it seems like all of the Spawn figures are coming with one. 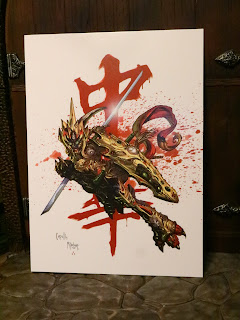 * The last piece is a miniposter of Mandarin Spawn by Todd McFarlane and Greg Capullo. It really is a separate piece on cardstock (not just part of the packaging) and it's a pretty cool little extra. 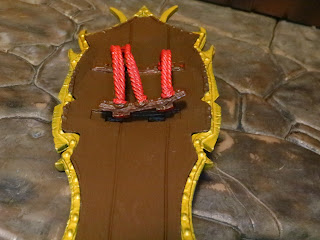 The Negatives:
* Right out of the package the bottom of the ropes holding the shield onto Mandarin Spawn's arm was loose. There's no glue here so I'm not sure if that's the problem or if the intention is that you can pop this on and off. It's really tough (almost impossible without using something metal) to get the piece back in, though, so if it is intentional it's not well designed. 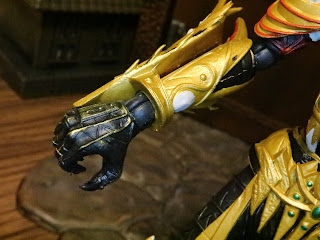 * The hands are very hard on this figure. The rest of the figure isn't this hard but the hands are likely to cause your fingers some damage when trying to out weapons it. Be careful! 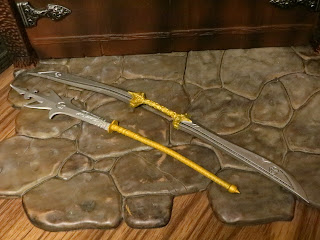 * The longer weapons do tend to be a bit too rubbery. With a little work you'll be OK but the double sword and the fangtian ji do tend to droop a bit overtime. 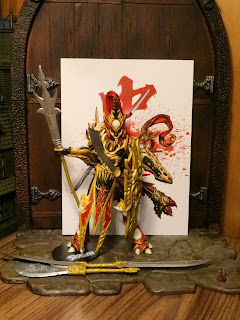 The last time I bought a new Spawn figure was Lotus Warrior Angel and the Digger when I found them at a Big Lots back in 2007. I've bought a few vintage Spawn toys here and there but those are the last time I purchased something that was a new release until this. Man, this guy is cool. I still don't think he's an impressive visually as the original Dark Ages version of Mandarin Spawn but the fact that he's an actual posable action figure makes him more fun. There are three versions of this guy and the other two are standard releases with different sculpted and painted details and fewer weapons. This guy has all of the weapons, though, and a more impressive paintjob. He's worth the price as a deluxe figure for sure. He's a Great and a 1/2 figure and my recent interest in Spawn can no be attributed to both this figure and the Clown-like musings of the Reel Brad Bell. I'm still seeing these at GameStop stores (along with the standard figure) so go pick one up if you're interested in. I don't think you'll be disappointed.
This is the first figure of Mandarin Spawn/ Chenglei that I've reviewed. If you're counting this guy as Spawn I've also reviewed the movie based Burnt Spawn and standard Spawn.
Posted by Barbecue17 at 11/02/2021