Action Figure Review: Fisto from Masters of the Universe Origins by Mattel 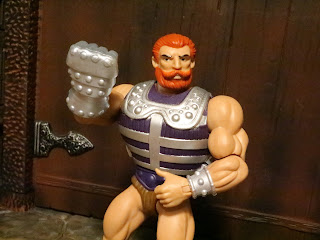 I guess it's time I finished reviewing series 5 of Masters of the Universe Origins, huh? If I were giving out an award for the most improved toyline of 2021 I think I would choose Masters of the Universe Origins. Last year the line felt like a standard "retro" line with little character of its own. This year Origins has really grown on me, however, and it's become a very fun and rather unique toyline. Series 6 and Series 7 are hitting stores now which means this line has had a bunch of figures released. Figures, vehicles, and even a playset make for a really fun toyline sold at mass retail for a pretty decent price. Today I'm checking out Fisto who was always one of my vintage favorites. Let's check out this power punching warrior after the break... 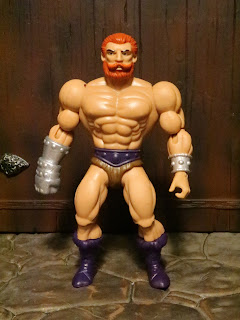 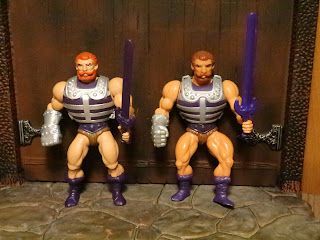 * On the left is the Origins Fisto while the vintage Fisto is on the right. Mattel did a pretty good job of replicating the vintage toy faithfully. The new headsculpt is better than the vintage one though Fisto has been given the more reddish brown hair like he had in the Filmation cartoon.

* Fisto has a pretty simple look to him. He's a burly, brawny, bearded guy with some simple banded armor and a giant metal fist. His purple and silver color scheme isn't outlandish at all (it's incredibly tame by MOTU standards) and he looks like he could fit into any number of barbarian fantasy worlds. The armor is made from soft rubber and it fits the figure well. It's one single piece that clasps at the sides and is easily removable if you feel the need to change things up a bit. 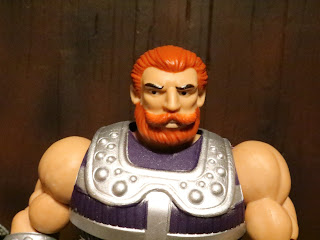 * The headsculpt is very true to the vintage toy as Fisto has some truly wondrous facial hair. I do like the more reddish brown color here which seems to be borrowed from the character's appearances on the Filmation cartoon. His eyes are cool with unique eyebrows. He doesn't look like someone you'd want to crack jokes about his name to, if you know what I mean. 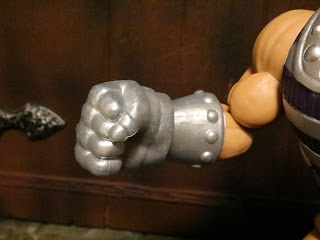 * Here is Fisto's titular fist. It's a giant metal fist. What more does he need? Whether you view it as an enhanced prosthetic or just simply as a weapon he carries with him in battle over his standard hand, it looks pretty cool. I like the fingers, just like the vintage toy. The fist is just a bit larger than the vintage toy, but not overly so. 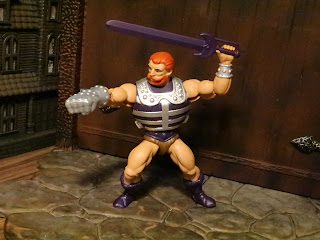 * The MOTU Origins figures are built like the vintage toys but with more modern articulation. While their bulky frames make the articulation a bit clumsy, they do feel like an evolution of the vintage line. Imagine what you would get if you mixed a vintage figure with a MOTUC figure. They're quite fun to play with and they feel very sturdy.

* They're also modular and can be easily separated to make your own lazy boy customs! 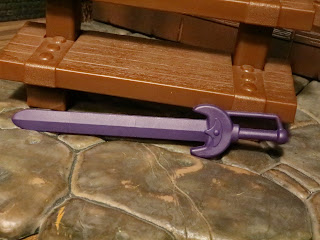 * Hey! Remember when Tri-Klops came with this sword? Fisto and Tri-Klops shared this weapon in the vintage line, too, so it's inclusion here is no surprise. It looks good, fits in Fisto's left hand snugly, and gives him an alternate to just punching your lights out when you crack jokes about his fist. 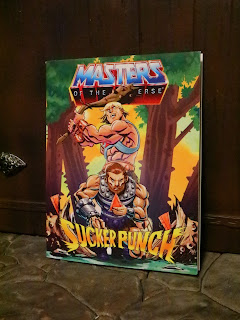 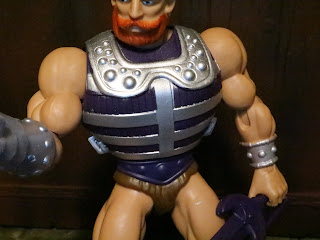 * If you look at Fisto's armor you can see that there are lots of silver flecks sprayed onto the purple. The armor is molded in purple so this is a case of the silver paint being a bit messy. 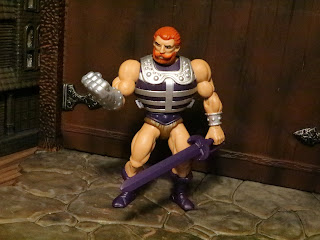 Fisto is another Great figure in the Origins line and another impressive figure in series 5. Series 5's two most desirable figures are clearly Fisto and Faker as they're the two new characters in the set. With some tighter paint applications Fisto could have been the star of the show but he's still quite cool. This guy always skips No-Shave November, you know? Jitsu is hitting shelves now as part of series 7 so you'll be able to have these two rivals go head to head (and fist to fist) in combat. Mattel has really been cranking out the figures this year but I'm curious if and when we'll start getting more of the more unique characters from the vintage line who had fewer reused parts? Hopefully the line will continue to expand in 2021.

If you're a Fisto fan, check out my review of the MOTU: Revelation Eternia Minis Fisto, and the Fisto and Stridor set, Fisto from the M.U.S.C.L.E. Masters of the Universe #1 set, the Loyal Subjects' Fisto, the Mega Construx Fisto and Fisto & Cliff Climber, and the Club Grayskull Fisto.