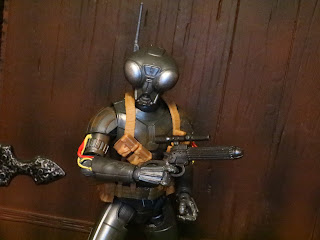 He's quicker than organics. And smarter, too!
You know The Mandalorian is a hit when Hasbro is really starting to roll out more side characters from the series. While we're not getting figures like we did in the past for the Prequel Trilogy releases, it's pretty cool that the Black Series is starting to flesh out the world of The Mandalorian with figures like Q9-0, AKA Zero. Voiced by Richard Ayoade, Zero has thus far only appeared in two episodes of The Mandalorian, most prominently in Chapter 6: The Prisoner where he was part of the squad of scoundrels tasked with rescuing a prisoner from a New Republic prisoner transport ship. The Mandalorian has had some great droids so far and while Zero isn't as memorable as IG-11 he definitely feels like a figure that would have been released if Kenner had been producing toys for the show back in the day. He's very reminiscent of 4-LOM, too, so here's another killer droid for your collection. Let's check out Q9-0 after the break... 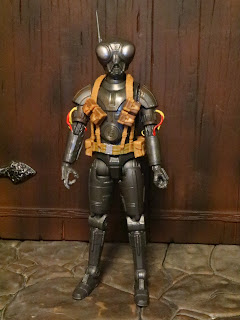 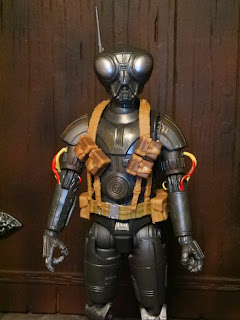 The Positives:
* Zero is a pretty standard looking protocol droid from the neck down with a more bug-like head rather than the humanoid head of someone like C-3PO. As far as I can tell he doesn't reuse parts from any of the other previously released protocol droids and thus his body design is completely unique and designed with updated articulation. There's some rally nice weathering on Zero's body, also, to give him an aged, greasy appearance. He's also sporting some very cool webgear with lots of pouches attached. 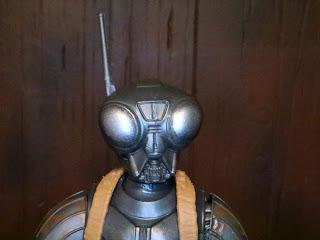 * Zero stands out as a protocol droid thanks to having a more insect-like looking headsculpt. it's pretty cool looking and calls to mind plenty of other Star Wars droids while still looking unique. He's got oversized silver receptors and a long antenna poking out of the top of his head. I can almost hear his voice when looking at this guy! 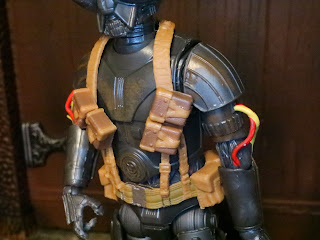 * While you could theoretically remove Zero's bandolier, I imagine it would be pretty frustrating and a paint to get back on. Having it as a separate piece definitely looks much nicer, though, and there are quite a few paint applications on it, too. I think these are based on some Russian military gear and they look pretty accurate to the show. I'm really waiting for a Mandalorian Visual Dictionary to identify all of this stuff. I know they seem to be delaying it until the show is over but that seems like a really weak decision to me. 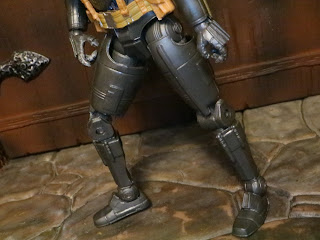 * Besides just having a unique sculpt Q9-0 also has some interesting leg articulation. the articulation blends in quite nicely and is well designed. There seem to be clear pegs in the knee and ankle joints to give the impression of the hinges being more open down there. 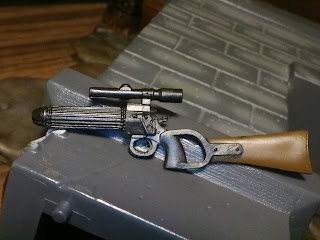 * Like Boba Fett, Zero also carries an EE-3 carbine rifle. It's a great sculpt with some nice paint detail on the stock. It's a bit tough to get it in Zero's hands but it looks good once you get it seated properly. 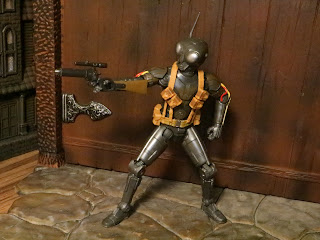 * The articulation is really good on Zero overall. Yes, he's a droid, so there's a natural stiffness expected but he moves wonderfully and doesn't feel at all limited like some protocol droids might. He's solid, durable, and has some nice extra features to help his articulation. His shoulder pieces are flexible to allow for the shoulder joints to move and he has both swivel/hinge elbows and swivel forearms to allow good arm movement without any risk of damage to the wires on his elbows. 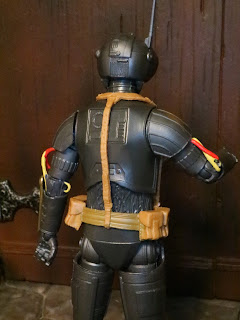 * The front of the figure has excellent paintwork but the back is pretty much unpainted. There's not really much color variation on Zero back there in the show but the various brushing effects on his metal body should surely go all the way around. 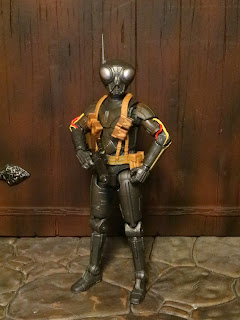 Q9-0 (Zero) is a pretty cool figure of a character I wasn't expecting to be released so soon (or at all). Due to the way Disney/ Lucasfilm seems to operate in regards to partnering with Hasbro is seems that Hasbro is almost always playing catch-up now. Who knows how long it'll be before we get Xi'an, Berg, Qin, and a proper Migs Mayfeld to complete this set. heck who knows if we'll ever get them? Zero is a fun figure and if you shop around you can still get him for the $20 or less rather than the soon to be standard MSRP of $22.99. When the price goes up it definitely makes picking up some secondary and tertiary characters more of a decision for some collectors. I know there have been a few repainted troopers and such I've skipped out on. the Black Series is still a really good line, though, and the new characters are really getting lots of effort put into them. Q9-0 gets a Great from me and is well worth tracking down as part of the newest set of figures out there.
This is the first figure of Q9-0 I've reviewed. For more figures from Star Wars: The Black Series Phase IV check out the following:
332nd Ahsoka's Clone Trooper
Admiral Ackbar
Ahsoka Tano (The Clone Wars)
The Armorer
Asajj Ventress
Aurra Sing
Boba Fett
Bo-Katan Kryze
Cad Bane
Clone Trooper (Holiday Edition)
Darth Vader
Din Djarin (The Mandalorian) & The Child
Garazeb "Zeb" Orrelios
General Lando Calrissian
Greef Karga
Han Solo (Endor)
Hunter
Imperial Stormtrooper
Incinerator Trooper
Jar Jar Binks
Jaxxon
Kuiil
Luke Skywalker (Endor)
The Mandalorian
Mandalorian Loyalist
Mandalorian Super Commando
Moff Gideon
Phase I Clone Trooper
Phase I Clone Trooper Lieutenant
Princess Leia Organa (Endor)
Range Trooper (Holiday Edition)
Remnant Stormtrooper
Rey (Dark Side Vision)
Sith Trooper (Holiday Edition)
Speeder Bike, Scout Trooper, & The Child
Teebo (Ewok)
Wrecker
Posted by Barbecue17 at 11/15/2021