Action Figure Review: Man-At-Arms from He-Man and the Masters of the Universe by Mattel 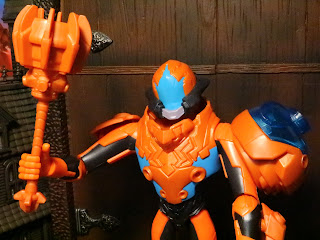 8.5 inches isn't a common action figure scale but since this is a line targeted at kids it seems Mattel wanted to have multiple SKUs on shelves and pegs to encourage retailers to order lots of product, thus the line has two scales. Man-At-Arms is a pretty cool looking figure who manages to look more like he should belong in Centurions or G.I. Joe: Sigma 6 than Masters of the Universe. You can see elements of the classic Man-At-Arms here, though. Let's take a closer look at this 8.5 inch version of Duncan after the break... 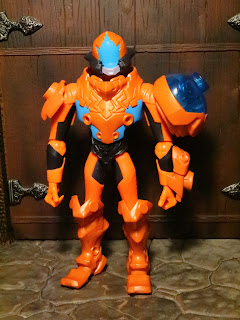 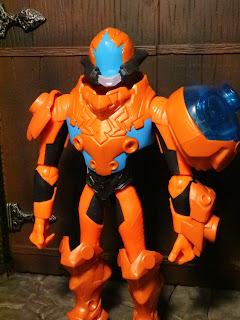 The Positives:
* Man-At-Arms is very heavily armored up here. He's always worn a lot of armor but the version from the Netflix series He-Man and the Masters of the Universe is more like Iron Man than a guy in medieval styled armor. The sculpt is pretty crisp and the colors are bright and bold. There's no green here (we get black for the bodysuit) but there is still some blue present, just like the Classic MAA's helmet. 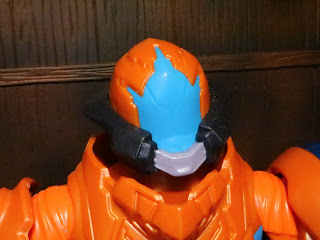 * Man-At-Arms helmet is pretty cool and covers his face completely. He's got a blue visor over his face and the conquistador styled helmet part which was blue on the vintage toy is bright orange here. Each armored up character has a very different look and feel in this take on MOTU and I personally really like that. He kind of reminds me of the space suit/ robot from the vintage Castle Grayskull, too! 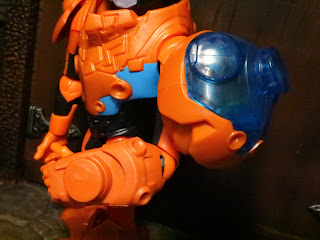 * Duncan's wearing more armor on his left side than on his right and it looks like it provides him some excellent protection. That giant blue pauldron is pretty cool and the translucent plastic on it definitely makes it stand out. 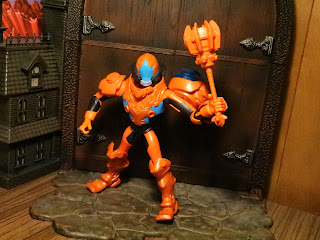 *  The 8.5 inch figures are quite different than the 5.5 inch figures with a better range of motion in the arms thanks to the swivel/hinge elbows and shoulders. MAA also doesn't have the Power Attack feature of his smaller counterparts and instead has a standard swivel waist. He's not the most solid feeling toy (he feels hollow in the torso) but he does feel sturdy and durable. 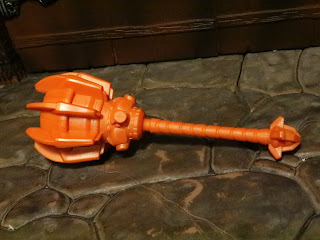 * His mace is really cool. It's a solid piece just molded in orange plastic but it has some excellent detail. The top of the mace is hollow which seems to be a barrel so energy bursts and such can fire out of the top. 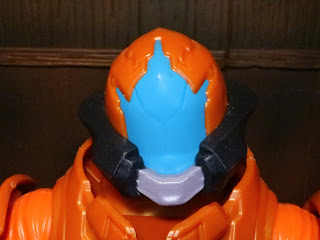 The Negatives:
* In the show you can see Duncan's face behind his visor. That's also true for the 5.5 inch Man-At-Arms figures. So why, I wonder, did Mattel not keep that feature here? It makes the figure feel like it was made on the cheap. Honestly, it likely was. 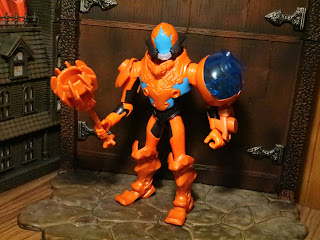 Man-At-Arms is pretty cool looking but at the same time, yeah, these 8.5inch figures definitely feels like a budget line that's marketed to kids and gift buyers. I love the design and there's so much potential here (imagine if this guy made it into Masterverse) but little things like more articulation, a more solid feel, and a more accurate helmet would have been very welcome. I'm giving Man-At-Arms a Good rating which is an average rating. There's nothing truly wrong with the figure but there's nothing terribly exciting that stands out about him, either.
I've reviewed so many toys of Duncan/ Man-At-Arms that he has his own review archive. Check out the Man-At-Armory for all of my Man-At-Arms reviews.
For more reviews from He-Man and the Masters of the Universe check out the following:
5.5 inch
Chaos Snake Attack
He-Man
He-Man and Ground Ripper
Skeletor
Skeletor and Panthor
Trap Jaw
8.5 inch
Battle Armor He-Man
He-Man
Posted by Barbecue17 at 11/10/2021