Minifigure Review: He-Man & Jet Sled from Masters of the Universe by Mega Construx 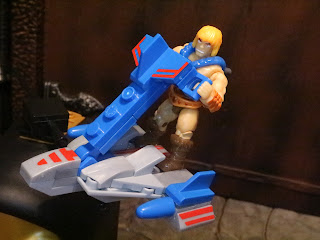 Today I'm checking out the third and final of the new series of Mega Construx Masters of the Universe building sets that come packaged in a miniature Skeletor head and this time it's the He-Man & Jet Sled set. The Jet Sled is one of the smaller vehicles/ accessory packs that was released in the vintage line in 1986 both by itself and in a gift pack with a He-Man figure.While we've already had multiple He-Man figures in this line it is kind of cool that Mega Construx attempted to recreate that vintage 2-pack. I really think I had the Jet Sled as a kid (I know I had the Megalaser, too) but they were part of some of my MOTU collection I sold off in the mid-1990s to buy Star Wars stuff. Live and learn, right? Some day I'm going to have to do a post about what I sold off. I'm always thrilled by how much I kept but I'm still heartbroken about a few of the figures I sold off. Anyways, He-man. Jet Sled. Let's get soaring after the break... 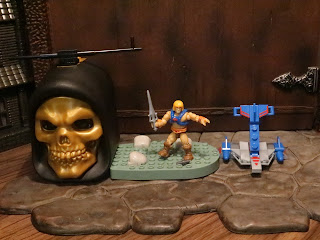 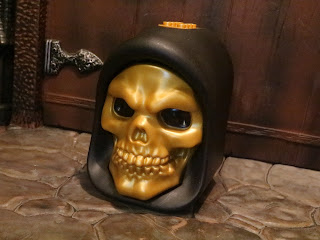 The Positives:
* All of the Skeletor sets feature the same sculpted Skeletor head but each set's head is molded in different colors. This one features the gold skull and black hood of the infamous Disco Skeletor from the 200x line who was once loathed but who now has become a popular variant for companies to utilize. The black and gold does look sharp as a tack here, y'know? 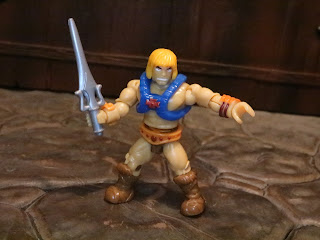 * There have been so many Mega Construx He-Man figures but he's still a good character and I can understand Mega Construx wanting to keep a He-Man on the shelves at all times. Like the rest of the figures in the line, He-Man is well articulated and fun to play around with. These really are some of the nicest minifigures out there and they're incredibly fun. If you haven't picked up one yet and you're either a MOTU fan or a minifigure fan, you really need to. They're exceptional. 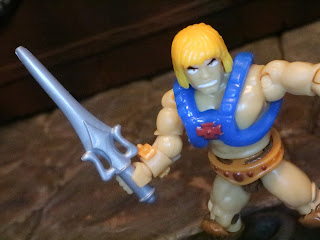 * He-Man comes with the standard Power Sword in a nice silver color as well as a blue harness. The vintage Jet Sled had armor that looked kind of like this and simply molding He-Man's harness in blue turned out to be a pretty effective way of capturing that vintage accessory. 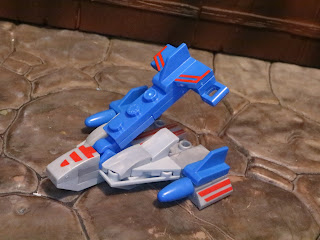 * Mega Construx does a killer job of making their brick built models look like the vintage toys and the Jet Sled is a home run. This thing looks great, doesn't it? Those pieces with the red stripes are all printed bricks, something Lego doesn't even do on all of their sets. Great job, Mega Construx! 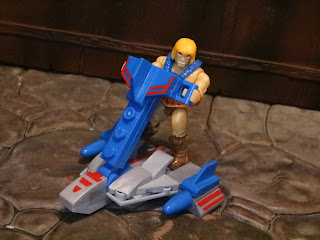 * The vintage packaging called the main Jet Sled feature the "Hover Race" position and it's a sleek vehicle that He-Man can stand atop on while gripping the handlebars to steer it and have some bit of stability. He looks great on this! It's like a Sky Sled but a bit sleeker, designed for pure speed. 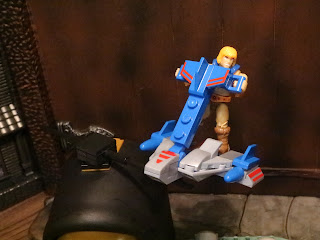 * On top of Skeletor's head there is a rotating black box with plastic rods attached which allows for the Jet Sled to be mounted so it can spin around and around. It's a bit silly but quite fun, making for a great way to display the Jet Sled. 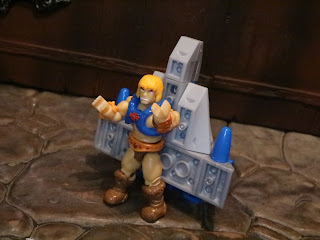 * The second configuration for the Jet Sled is as a jet pack that can fit on the back of a figure. There's an extra peg included which connects the Jet Sled to the figure, allowing them to swoop off into the sky. Whoosh! 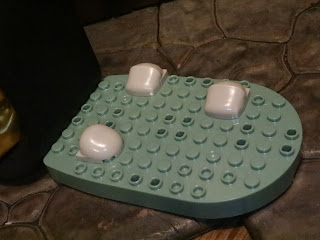 The Negatives:
* The side of the set is just a few simple rocks. Nothing too exciting, right? That's kind of dull, especially for a flying vehicle. 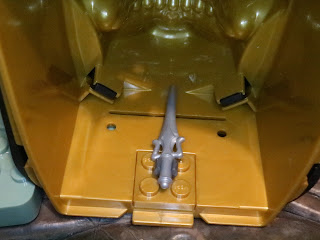 * Inside Skeletor's head is a clip for holding the Power Sword. It's not awful but wouldn't something a bit more exciting have been cooler. I'm thinking a Grayskull green pillar or something that the sword could clip too. 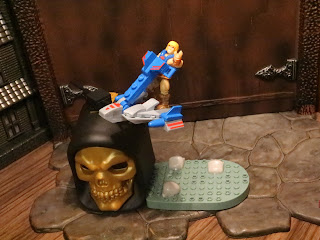 The He-Man & Jet Sled pack definitely has the best vehicle/ accessory but the other details of the set just aren't as cool. You 're also getting yet another He-Man although I really do like his blue harness. This is still a Great and a 1/2 set, especially given the price of these, and it's worth it alone for the cool Jet Sled and the nifty Disco Skeletor bust. Seeing these really makes me wish that Mattel or some licensee would make some Micro Machines inspired playsets for micro figures. Wouldn't that be something? The Mega Construx brand is doing a nice job of really fnding some cool stuff we haven't seen in MOTU since the vintage line and adding it into this very high quality building block line. How cool to see the jet sled again, right? I'm shocked we never saw that in Masters of the Universe Classics. Think we'll see it in Masters of the Universe Origins? At least we know it's on the radar.
This is the first Jet Sled I've reviewed on the site. For more of He-Man check out the Fabulous Secret Powers archive and for more of Skeletor check out the Snake Mountain archive!
For more Mega Construx Masters of the Universe reviews check out the following:
Battle Bones
Battle Cat Vs. Roton
Battle for Eternia Collection
Castle Grayskull
Evil-Lyn (Mega Construx Heroes)
Evil-Lyn
Evil-Lyn (Series 2)
Faker
Fisto
Fisto & Cliff Climber
He-Man VS Beast Man
Man-At-Arms (Mega Construx Heroes)
Moss Man
Panthor at Point Dread
Prince Adam
Scareglow (Mega Construx Heroes)
Skeletor
Skeletor & Panthor
Stratos
Stratos (Mega Construx Heroes)
Teela
Trap Jaw & Laser Cannon
Wind Raider Attack
Posted by Barbecue17 at 2/23/2021