Minifigure Review: Battle Ram from Masters of the Universe by Mega Construx 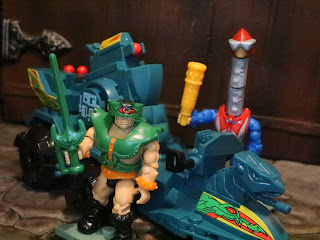 The Mega Construx Masters of the Universe line is off to a great start this year and quite possibly the best set so far is the Battle Ram. Not only do you get an excellent, brick built version of the classic MOTU vehicle but you also get two brand new minifigures with the set: Mekaneck and Tri-Klops! These are the classic versions of these characters as well and while they'll probably be re-released in someway down the line I imagine most fans will jump at the chance to own these guys as soon as possible. The Battle Ram continues to be a popular vehicle as it both looks cool and it was one of the original 1982 releases, so Mattel keeps cranking them out. Ready to tackle this excellent Mega Construx Battle Ram set? Then join me after the break... 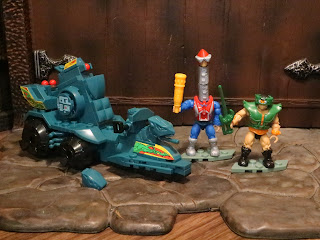 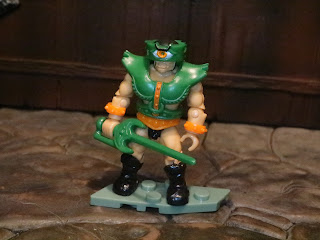 The Positives:
* I've said this about every MOTU Mega Construx minifigure but, man, these guys are fun to play with as they sport excellent articulation. This is an awesome looking Tri-Klops that captures the vintage look of the character really well. He's sporting the removable bracers, a sword, and his chest armor. 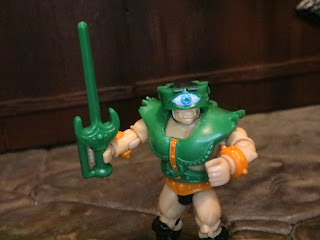 * The sword is the same as Fisto's, but that's just fine as the vintage Tri-Klops sword was reused for Fisto. There's also a slit in the back of his armor to hold the sword when Tri-Klops (real name Trydor Esooniux Scope) needs both hands free for tinkering with his latest gadget or piloting a vehicle. 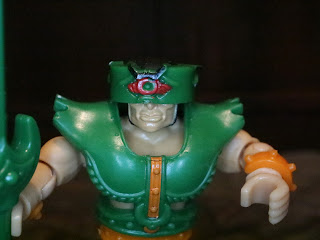 * Does Tri-Klops feature a working visor? You'd better believe it! The visor rotates perfectly to show off his three different enhanced eyes with the Distavision, Gammavision, and Nightvision features. 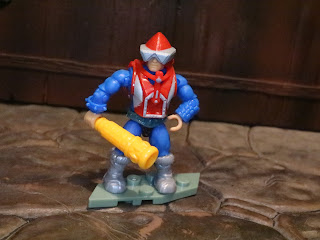 * What's up Mekaneck? Mekaneck's another highly poseable minifigure with a removable right bracer and great armor that makes him look just like his vintage counterpart (he shares it with Stinkor here, just like in the vintage line). I love Mekaneck's red, blue, and silver color scheme! I also love his helmet. I used to draw it all the time on school papers and notebooks and stuff for some reason. 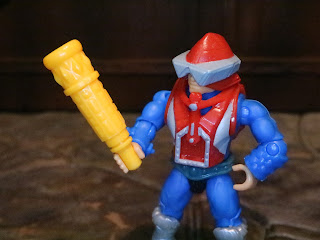 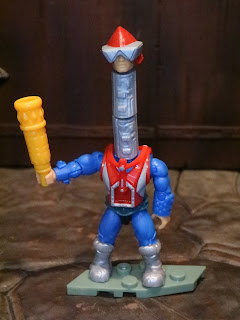 * To replicate Mekaneck's extending neck feature Mega Construx went in the direction of the Masters of the Universe Classics line and gave Mekaneck some extra neck pieces that fit onto his neck and allow his head to attach to the top. Want a regular sized neck or an extra long neck? You've got some options here! People have pointed out, though, that on the box where it shows Mekaneck driving the Battle Ram his neck is fully extended, leaving his head right in front of the Battle Ram's cannon. Not a smart move, Mekaneck! 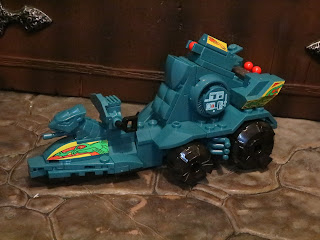 * The Battle Ram always has an unusual charm that I just love and I really think the Mega Construx version is one of the coolest looking Battle Ram models to date. It's gorgeous! The colors are perfect and there's a lot of unique design elements that really bring it to life. 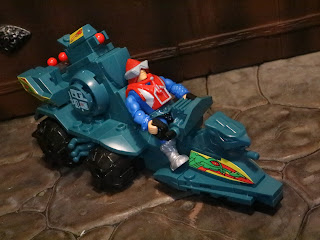 * Any figure can sit in the drivers seat and grip the handle bars, allowing them to pilot this amazing war machine. Mekaneck looks so cool here, doesn't he? 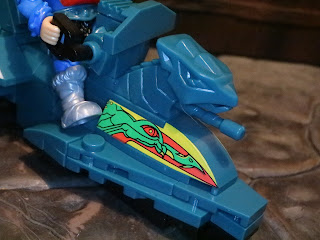 * The front of the Battle Ram is really nice! Check out the headpiece, the laser cannon, and the great art on the side. The pieces are actually printed rather than stickers which is really cool. It's amazing how Mega Construx uses almost all printed blocks while Lego sets that cost many times more still mostly rely on stickers. That's a huge plus to these sets! 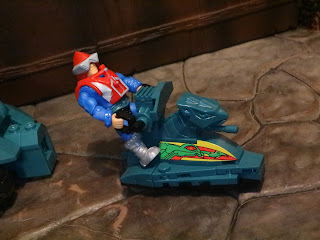 * The front of the Battle Ram is removable to become a Sky Sled! How cool! It works great and easily pops on and off from the rest of the chariot. 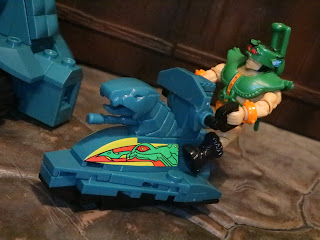 * There's a swappable snake head for the Sky Sled as well so you can customize this vehicle for the villains. 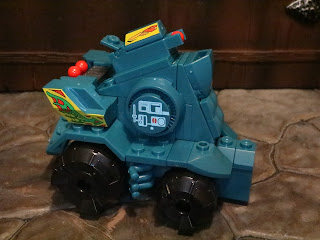 * The rear of the Battle Ram looks great, too. It's big, bulky, and loaded with lots of details. I like the exhaust pipes at the bottom and the massive tires. 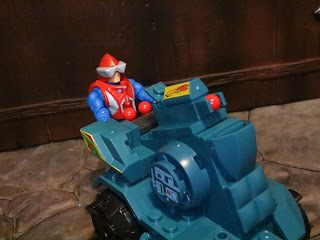 * There's a place for a figure to stand and grip onto the back of the Battle Ram so you can pose a figure using the siege cannon to assault the enemy stronghold! 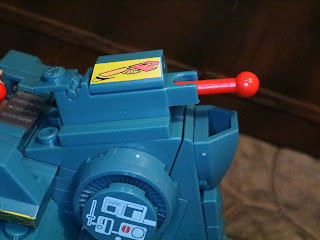 * The Battle Ram actually fires! It has three missiles (one stored in the cannon with the other two attached to the back of the Battle Ram) and they fire quite far. Seriously, this thing has some power to it. 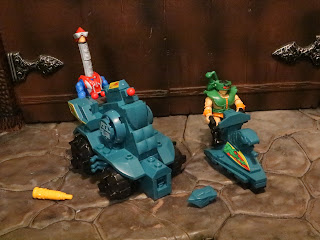 Not only is the Battle Ram an excellent brick built vehicle that's definitely worth having ($20 dollars wouldn't feel outrageous for it just on its own) but the Mekaneck and Tri-Klops figures included with this piece are some of the best in the line to date. This set is a really good value for $20 dollars and is absolutely one of the best Mega Construx releases put out to date. This line keeps getting better and better and I continue to anticipate each new release. Who knows what we'll see next? This is an Epic set and it shouldn't be missed for fans of the line. I can't say enough good things about it!

If you're a Mekaneck fan check out my reviews of the M.U.S.C.L.E. Mekaneck from series 3, Pack D, the NECA micro-bust of Mekaneck, and the ReAction Mekaneck.

If you're a Tri-Klops fan I've also reviewed the M.U.S.C.L.E. flesh Tri-Klops and green Tri-Klops, the POP! + Pez Tri-Klops dispenser, and the POP! Tri-Klops #951.