Minifigure Review: Fisto & Cliff Climber from Masters of the Universe by Mega Construx 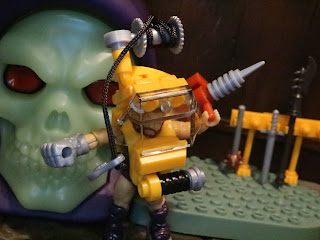 The Masters of the Universe Mega Construx range is off to a strong start in 2021 as they've already released the Skeletor & Panthor set, the Battle Ram is shipping out now, and the three character and accessory sets packaged in Skeletor heads are showing up on store shelves. Yes, the most recent subset of Mega Construx MOTU characters consists of three figure and accessory packs which come packaged in small plastic Skeletor heads. They're quit neat and definitely will catch your eye on the shelf. The first set I found is the Fisto & Cliff Climber set, which I'm reviewing today. Fisto was already released last fall in a single pack but this one's a bit different and is intended to work alongside the Cliff Climber. Remember the Cliff Climber? Released in 1987, near the very end of the vintage Masters of the Universe line, the Cliff Climber was a motorized accessory that allowed you to outfit a MOTU figure for battle in the mountains. It's not an easy set to find, especially complete, so it's kind of cool to see Mega Construx paying homage to it. Let's take a look at the Fisto & Cliff Climber set after the break and see if this one is worth picking up... 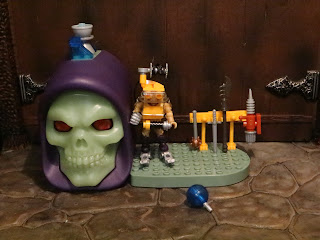 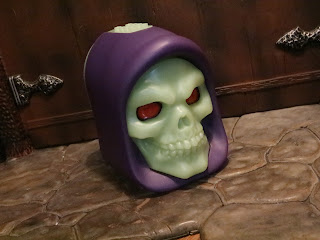 The Positives:
* The three sets in this series all come packaged in a plastic Skeletor head. They're all the same sculpt but molded in different colors. This one gets a darker purple hood, red eyes, and the skull glows in the dark. 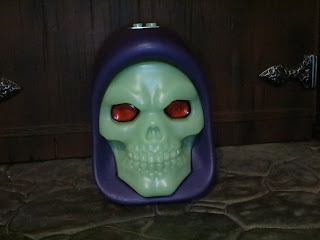 * Yes, you head that right! Skeletor glows in the dark! It's not the strongest glow but it still glows and it looks pretty cool. 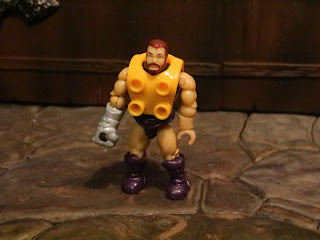 * Fisto comes with the set which is interesting. While folks love Fisto, he seems to be an unpopular choice for this. It's probably because we just got a Fisto a few months ago but it could also be because Man-At-Arms was most prominently displayed on the vintage box. We've got a bunch of MAA figures, though. The biggest difference between this Fisto and the previous release is that he's got an all black torso, a removable orange armor piece with studs on it, and lighter hair (more reddish) with a small hole in his head. Why the hole? Who knows? 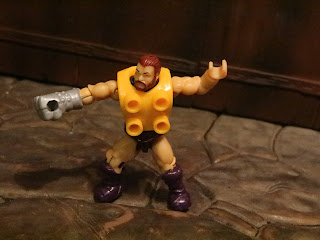 * Like the rest of the figures in this line Fisto is well articulated and ready for battle. These really are some of the nicest minifigures out there and they're incredibly fun. If you haven't picked up on yet and you're either a MOTU fan or a minifigure fan, you really need to.
*Of course, Fisto is also packing his massive metal fist! Kapow! 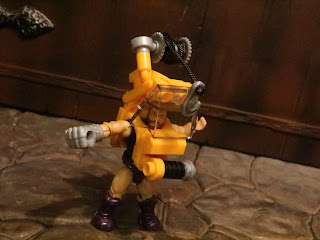 * The Cliff Climber is built from multiple smaller parts and it does a pretty good job of capturing the look of the vintage toy. There's a winch with hook on the top, a translucent visor covering the figures head, and a black cylinder on the front. The cylinder is actually supposed to be a "Chest Crawler" that on the vintage toy allowed the figure to "crawl" along the ground. Kind of weird, but it's present and it looks cool, more like an oxygen tank her for when the Heroic Warriors have to climb some tall mountains where they need oxygen (though they're still wearing short sleeves and fuzzy trunks). 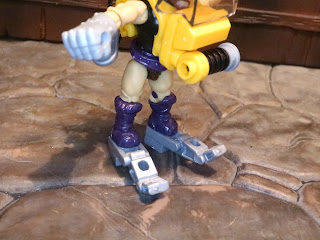 * There is also a set of climbing claws that attach to the feet. They're built from a couple different parts and the hooks on the end are hinged. I guess these help provide some additional grip when Fisto is climbing up a surface. 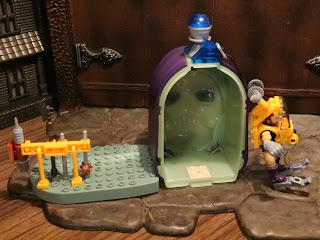 * The Skeletor head turns into a small structure for the set. The back of the container becomes a plate for building (on the left) with a weapons rack and a mysterious orb amid a pile of crystals. I guess the interior of the Skeletor head could be a small cavern as well, as you do place a small plate in there to allow figures to stand on. 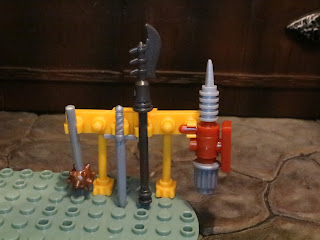 * The weapons rack is awesome. You get a mace, a sword, a halberd, and the Roto Drill from the original Cliff Climber set. All expect the sword are made from multiple parts and they give you a chance to nicely equip your MOTU Mega Construx minis with some cool new gear. 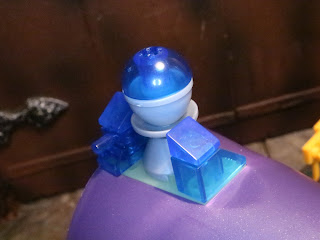 * On top of the Skeletor head you build this little pile of blue crystals with a podium in the center that holds half of a round blue crystal. Apparently, this is what Fisto is trying to reach. It looks like the pedestal for the Power of Grayskull orb that came with the Masters of the Universe Classics King Grayskull v2 figure and Castle Grayskull and the Power Orb from the Mega Construx Castle Grayskull. 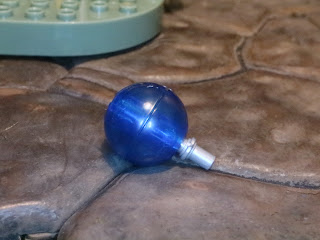 * There's actually a 2nd half to the glowing blue orb of Power included as well as the little plug that allows for a figure to hold it. That's cool but why's Fisto holding this? Is he trying to become He-Fist? Or Fist-Man? What about He-O? Is he planning to hold aloft his magical fist? Seriously, what's going on? 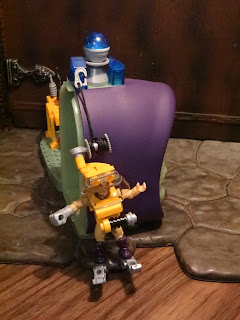 The Negatives:
* I think the intention of the set is that Fisto can use the Cliff Climber to climb up the "mountain" and reach the Power orb. There is a place for the Cliff Climber to attach, so the cliff climber works in that way, but it's really tough to get Fisto to look like he's actually climbing. He just kind of hangs around. Having built a little cliff of sorts, or maybe even having used the green plate attached to the back with pieces on it would have made for a cooler playset. 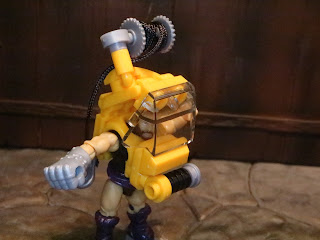 * The Cliff Climber looks great and it is cool how it actually attached over a figure like the vintage toy. Try to move the hinged visor, however, and it's going to simply fall off. The hinge just doesn't function how it feels it should 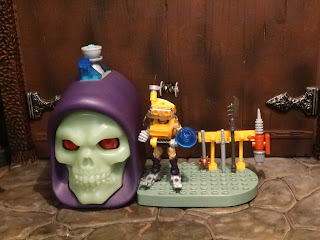 Despite some little quirks with the build of the Cliff Climber for $10 bucks this is a pretty neat little set. I love the use of the Skeletor heads as the packaging and as part of the build. It's a cool marketing gimmick. Considering an individual figure costs about $5 bucks you're getting a figure plus multiple accessories, the Cliff Climber, and the Skeletor piece for display. The Fisto & Cliff Climber set gets a Great and a 1/2 from me as there's a lot of fun to be had here and a cool little display item for your shelf. I have also found the other two, so reviews of those will be coming soon as well!
This is the first toy of the Cliff Climber I've reviewed.

If you're a Fisto fan, check out my review of the mini Fisto from the M.U.S.C.L.E. Masters of the Universe #1 set, the Loyal Subjects' Fisto, the Mega Construx Fisto, and the Club Grayskull Fisto.

I've reviewed so many toys of Skeletor/ Keldor that he has his own review archive. Check out Snake Mountain for all of my reviews of the evil lord of destruction himself!