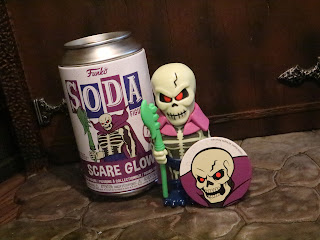 Funko's Vinyl SODA was one of my favorite toylines of last year and by starting the year off strong with a release of Scare Glow in the line they're setting themselves up to earn a spot on my list for this year, too! Scare Glow is always a popular character and I'm quite pleased this guy wasn't a convention exclusive. Still, he was kind of hard to find. I never saw him listed for preorder at most e-tailers and he sold out pretty quickly overall. Like most of the Vinyl Soda releases there is a standard edition of Scare Glow (the one I have) and a chase variant of 1,200 pieces that actually glows in the dark. Scare Glow has become one of the most popular Masters of the Universe characters due to his cool appearance and the rarity of his vintage figure so Scare Glow merchandise always tends to sell like Roast Gooble on a stick at the Eternian State Fair. Let's take a look at Scare Glow after the break... 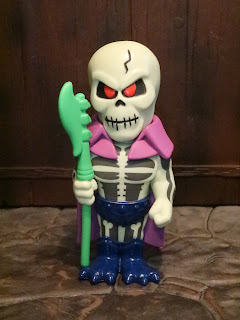 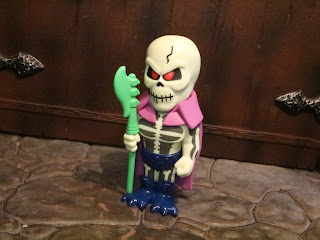 The Positives:
* Scare Glow very well might be my favorite figure in this series yet. I mean, check this guy out? He's incredible looking! Scare Glow is a solid vinyl figure (no articulation) who is standing at attention and who reminds me of a breakfast cereal mascot from the 1960s or 1970s. I love the aesthetic of this line! It's seriously one of my favorites. 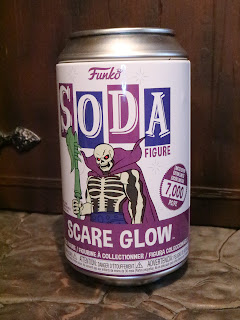 *  I'm a big fans of the cans these come in! The soda can design is so incredibly cool and makes for a rather unique display piece on a shelf. Scare Glow soda would absolutely be something bright, strong and fierce, like a Mountain Dew or Sun Drop soda with an intense flavor. Since Scare Glow never appeared in the Filmation animated series theres some new art here of him that looks quite spooky. The can displays all of the expected labels while the back shows off the figure and includes all of the legal info, etc. The top of the can separates so you could use the can to store trinkets as well, and it's even sculpted to look like the top of a soda can. It's made from a much more durable metal than your average soda can, too, so it's quite a nice collectible. 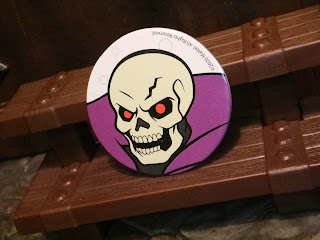 *  Inside the can is a round, sturdy cardboard disc. It's kind of like a POG, though a bit larger. On the front is Scare Glow's terrifying visage, while the back has the figure's name and the run amount listed. 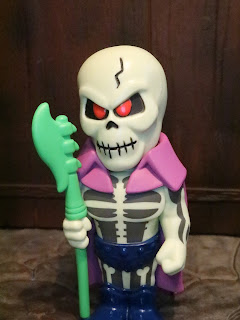 * Scare Glow looks amazing. I love the way the bones are printed on him, just like the vintage, toy, and the colors of his cape and his halberd really just pop out on the shelf. The aesthetic of the Vinyl SODA really appeals to me and I hope we get a pretty robust series of these figures before Funko moves on to something else. 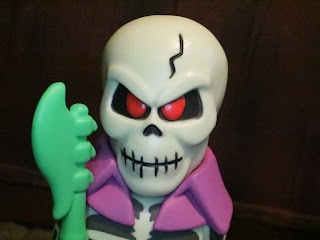 * The headsculpt is amazing. I love the red eyes and the crack. While this version of Scare Glow doesn't actually glow the color used for his skeleton definitely looks like it could. 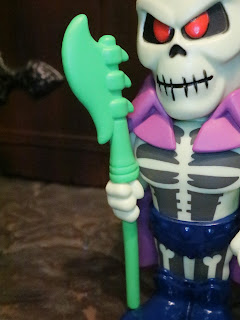 * Scare Glow is toting around his bright green halberd! The details from the vintage toy (which was a repaint of the halberd from the Castle Grayskull weapons rack) are all present and accounted for on here. 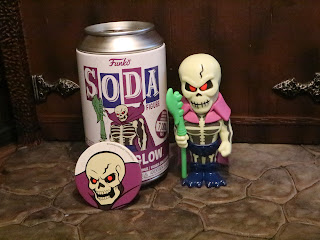 It's really fun to see the MOTU characters in this style and Scare Glow is one of the best yet. Heck, he might be the best yet. These are super fun little collectibles and even the soda can shaped packaging is really cool to display. This guy gets a Great and a 1/2 from me! Funko seems to be supporting this line better than most of their non-POP! endeavors so maybe it will keep going on for awhile. I know they've got some Emerald City exclusives coming up, too, so hopefully those will be easy to get and give us a couple more additions to the collection.