Minifigure Review: Man-E-Faces from Masters of the Universe by Mega Construx 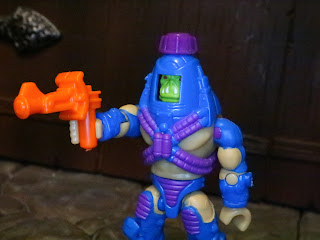 A new series of the Masters of the Universe Mega Construx figures has started showing up recently and mine were delivered sometime last month. Interestingly, the five individually carded figures in this set (Scare Glow, Tri-Klops, Roboto, Trap Jaw, and Man-E-Faces) came shipped in a cardboard mailer designed to hold the five figures as one set. It seems that Mattel is definitely working to make selling some of their merchandise easier for e-tailers and that's a good thing. Lately it's been easier to get Mattel stuff online than it has been in the past. Man-E-Faces is one of two Heroic Warriors in this set, both of whom are new characters to the Mega Construx line. Let's take a look at this multi-faced master after the break... 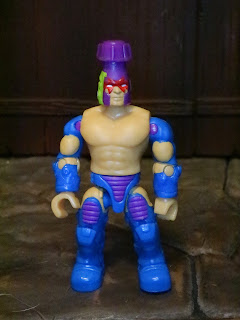 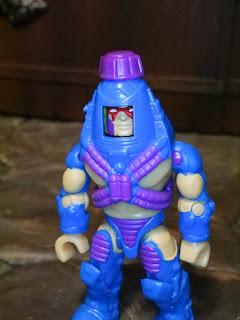 * Man-E-Faces looks excellent here. These little guys remind me of miniaturized versions of the Masters of the Universe Classics line which is a great thing since it's still the best MOTU line of all time (You disagree? Let's go, chump!). Man-E-Faces is decked out in his classic...whatever the heck he's wearing. It's odd, isn't it? He's supposed to be an actor but his outfit has always reminded me of something that might be used by an Eternian miner or something. Couldn't you see that? The suit is really detailed with clean paint applications on the purple details such as the tubes and padding. Also of interest is the fact that the color of his body matches his face. The vintage toy has an orange body, perhaps as if he's wearing a body suit, while the cross sell art on the back of the original package showed Man-E-Faces skin visible underneath his blue gear, thus Mattel went with the cross sell art design here. 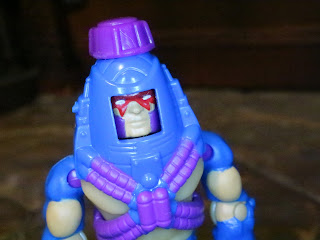 * Man-E-Faces definitely has an interesting helmet and while the purple dial is larger in proportion to the dial on other figures it still functions the same. Spin the dial and you can switch his faces. Here is Perkaedo's true face (that's Man-E-Faces' real name) which has either some interesting eye paint or a mask. 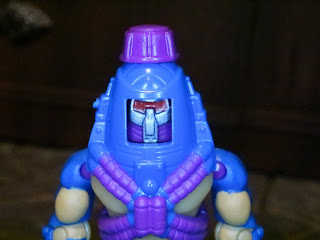 * Next up is the robot face. In the Filmation series Man-E-Faces just used different disguises somehow but the vintage minicomic "The Ordeal of Man-E-Faces" had Skeletor force Man-E-Faces to drink a potion which turned him into a monster. After the intervention of the Sorceress and further meddling from Skeletor the robot personality emerged. Why? Who knows. Still, it's pretty cool looking. I love the sculpt and the colors here, especially on his eyes. 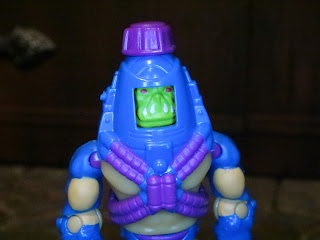 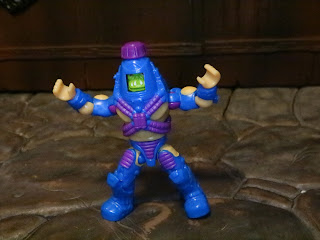 * Like the rest of the figures in this line Man-E-Faces is well articulated and ready for battle. These really are some of the nicest minifigures out there and they're incredibly fun. If you haven't picked up on yet and you're either a MOTU fan or a minifigure fan, you really need to. 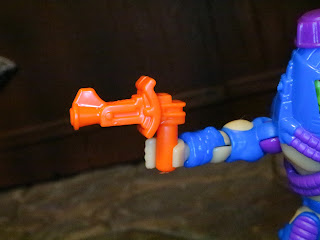 * Man-E-Faces also comes with his massive reddish-orange laser pistol. It's a great take on his vintage accessory (which also showed up in the vintage Weapons Pak). 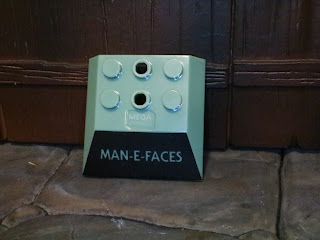 * Look! Mattel even included a little stage for Man-E-Faces to perform on! It's a simple display stand with his name on it. This is a great little stand for displaying the figure, even if you want to put him in more extreme poses. 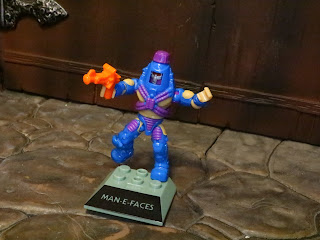 I'm really impressed with Man-E-Faces. I'm just continually impressed by the Mega Construx team as they're just doing an excellent job with this line and keep coming up with more fun, innovative items. Man-E-Faces is an excellent figure and the way his rotating faces work is just superb. He's a really well engineered little figure and just a remarkable toy. This guy is definitely the early runner for my favorite figure in this set. Will the other figures be able to surpass him? We'll find out soon enough!