Action Figure Review: Teela (Shiva) from Masters of the Universe ReAction by Super7 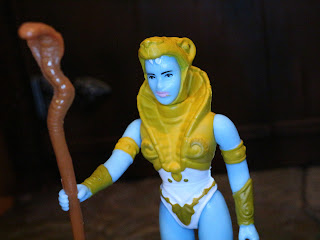 Today I'm checking out the last of the Variable Variants from Super7's Masters of the Universe ReAction line and it's Teela...dressed as Shiva. Yes, this might indeed be the oddest Masters of the Universe variant I am aware of since the variant isn't based on a particular media representation of a character but is actually based on the Hindu deity Shiva. You might at first guess that this is supposed to be the Goddess/ Green Goddess from the vintage He-Man and the Sword of Power mini comic, but it isn't: That figure was released already last year as yet another color variant of the standard Teela figure. Super7 officially has listed this figure as Teela (Shiva), so it really does seem that this color variant is indeed simply based on the color palette of the Hindu deity. Apparently the inspiration for this figure, as revealed by Super7's Brian Flynn, is that there was discussion about the vintage MOTU variants released in India through the toy company Leo. Realizing there wasn't a vintage Leo Teela, Super7 decided to create this design and call her Shiva. Why? Well, Leo is an Indian based company and since the Hindu deity Shiva is sometimes depicted draped with a serpent, the serpent-like armor this version of Teela is wearing is fitting. Interesting choice and a fairly obscure reference, huh? Let's take a closer look at the figure after the break... 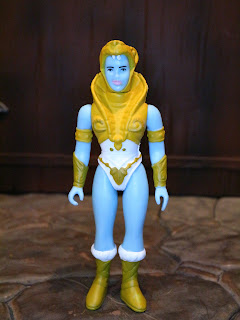 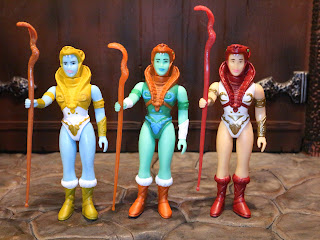 * Here's a comparison of the three Teela variants I have from the MOTU ReAction line: One left is the "Shiva" Teela, in the middle is the Green Goddess/ Teela, and on the right is the standard Teela. They're fairly easy to tell apart although the skin tones on Shiva and Green Goddess are pretty similar. I really hope at some Point Super7 uses the Evil-Lyn body and a new headsculpt to release a more standard Teela. 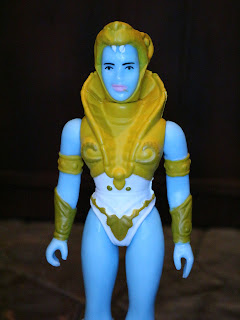 * I haven't reviewed a ReAction Teela yet, so I will point out that it is interesting that Super7 went with the snake armor version of Teela. It did allow them to do multiple variants of Teela and, of course, it is definitely more representative of the earliest era of the MOTU line which this line derives most of it's inspiration from. The details on Teela's armor and body suit are quite nice and still are very easily discernible while still having that vintage Kenner feel to them. The colors are really nice, too. 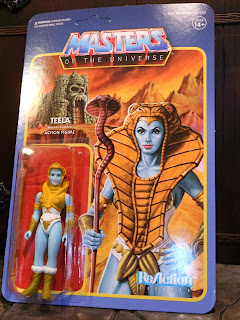 * The card art on most ReAction figures released by Super7 is beautiful and their Masters of the Universe line is no exception. Teela features a beautiful illustration of the character recolored with the new color scheme. To preserve the card I actually made a slit in the top of the blister so I can slide the figure in and out. It work great and allows the figure to be displayed inside and outside of the card. 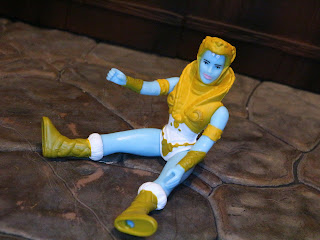 * If you've ever picked up a retro figure like this, you know what to expect: 5 points of articulation and all swivel joints. Teela feels quite well made and sturdy and definitely of a better quality than some of the earlier ReAction figures that Funko put out. Super7 has been very consistent in the quality of their ReAction lines. Interestingly, like Evil-Lyn, Teela has a v-crotch. Those were popular in the 90s (thank Playmates Star Trek or McFarlane's Spawn) and allow the figure's hips to look more feminine. She can's sit normally but that's not a huge deal in a line with no vehicles. 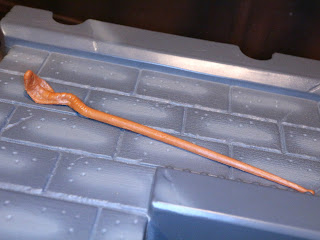 * The Shiva repaint of Teela includes a recolored staff of Ka. This is a pretty nice sculpt of the main weapon included with the vintage Teela figure and it does further go with the snake motif of Shiva. 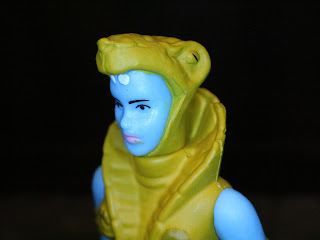 * I'm not loving the headsculpt here. It really does look odd, and not in a faux-retro way, but in just an unusual "this doesn't really make me think of Teela" sort of way. The paint is also kind of messy here, especially on the teeth of the serpent hood and on the edge around the face. 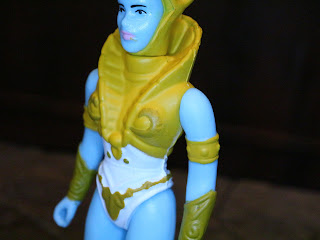 * I like the sculpt of the costume but I get the impression that a lot of the detail has been obscured because of the paintwork. The paintwork seems rather thick and maybe just a bit gloppy. 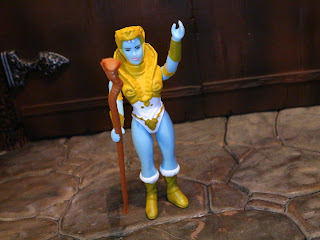 While this Teela variant has a fairly interesting source of inspiration, she really isn't the most interesting figure. She's so similar to the previous Teela and the paintwork definitely seems a but messier or heavier than usual which removes a lot of the detail. Some of the variable variants were more interesting than others but I definitely think the Shiva version of Teela is the least interesting of the bunch. Not terrible, but definitely kind of an Eh and a 1/2 figure. If you're a huge fan of these figures or love Teela you might be down for this. Otherwise, this one feels fairly skippable.


If you're a Teela fan, I've reviewed a couple of Teela toys such as the M.U.S.C.L.E. green Teela and the standard M.O.T.U.S.C.L.E Teela, the Mega Construx Teela from the Battle for Eternia Collection, and Super7's Ultimate Teela.