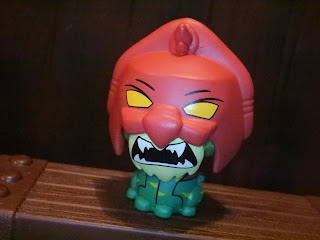 Yes, the original eight action figures from the 1982 Masters of the Universe line are iconic characters who have helped fuel our imaginations for years to come, but there were a few other amazing things introduced in the original series of toys as well. One of my personal favorites is the mighty Battle Cat! I've owned my original Battle Cat for as long as I can remember but since today we're celebrating the various toy incarnations of these characters that have been released over the past 38 years I'm checking out a tiny version of Battle Cat from Funko's Pint Size Heroes series. These little guys were sold blind bagged in small foil pouches back in 2018 and are kind of like the miniature versions of Dorbz. When I first found these I was really excited that Battle Cat was part of the first set of packs I opened! He looks so cool and fierce despite the fact that he's less than 2 inches. Let's check out Battle Cat after the break... 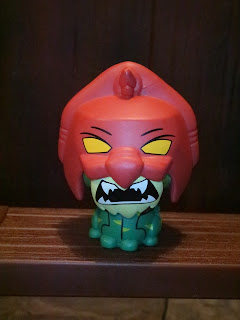 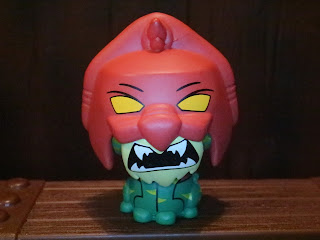 * Funko puts out so many different product ranges but these Pint Size Heroes remind me of a mixture of Dorbx and POP! vinyls. They have the small, stylized style of the Dorbz figures but with a bit more unique sculpting. Battle Cat has a fantastic looking headsculpt, most of which is his helmet. They yellow eyes are fantastic, as are the teeth. They're painted on but they look pretty intimidating! 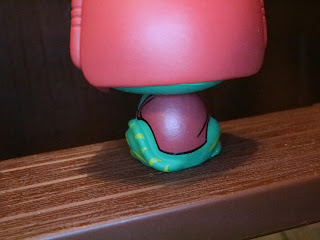 * Flip Battle Cat around and you can see that he's sporting a saddle. There's not a lot of detail there but it's still there. Oh, and there's his tail! I've always loved Cringer/ Battle Cat and even though I'm allergic to Earth cats, I really like to imagine that I wouldn't be allergic to Cringer. 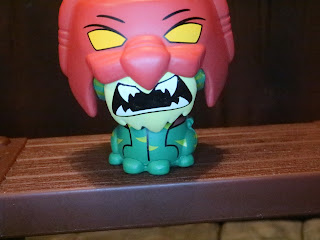 
* I like the effort that Funko put in by giving Battle Cat individually sculpted paws and drawing on legs, but isn't weird that the legs and the paws don't quite match up? 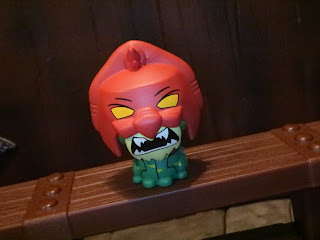 The Pint Size Heroes are a cool little series of MOTU minifigures and Battle Cat is one of my favorites in the set. They're really like miniature Dorbz, but they definitely have a charm, especially when they're all lined up on the shelf. Battle Cat is a Good and 1/2 little minifigure that definitely captures the fierceness of the character. Battle Cat is not only one of the most iconic MOTU characters but he's one of the most iconic toys ever. That green and yellow color scheme is just incredible and instantly brings dozens of childhood memories to mind! Battle Cat was a key part of the MOTU line but he wasn't the only means of conveyance in the first series of MOTU toys...

For more Pint Size Heroes: Masters of the Universe, check out the following:
Beast Man
Posted by Barbecue17 at 4/28/2020