Action Figure Review: Teela from Masters of the Universe Ultimates by Super7 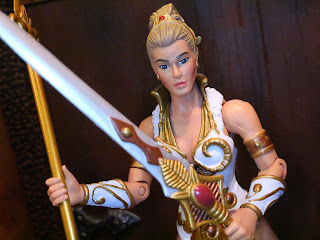 I recently acquired the Masters of the Universe Ultimates Teela from Super7, which was one of the first Masters of the Universe Classics figures offered by Super7 at the end of 2017 after the took over the brand from Mattel.  Super7 offered Teela, along with He-Man, Skeletor, Ram Man, and Faker, as Ultimate edition figures that included multiple heads and accessories as a way to get the most prominent characters from MOTU back into the line. Teela was originally released in 2009 at the beginning of MOTUC and while Mattel did release a Battleground Teela and pilot Teela with the Talon Fighter, she's typically been one of the most difficult core characters to get. While she's now tough to find again (the Ultimates shot up in value quickly) I'm pretty pleased to have another Teela. While Teela is one of the core characters from the series it always feels like she gets neglected by toy manufacturers. Out of all of the product they released, the only Teela Funko made was the Pint Size Hero version. What gives? Let's show Teela some more love! 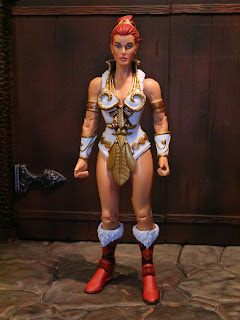 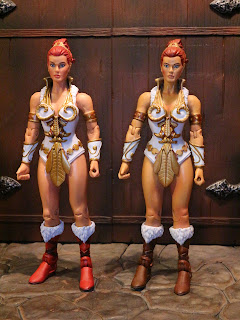 
* On the left is Super7's Ultimates Teela while on the right is Mattel's original MOTUC Teela. As you can see, both figures are exactly the same sculpt-wise. Apparently Super7 was able to use Mattel's factory for these, so the plastic quality is even the same. The paint work is slightly different, though, most noticeably as Teela's hair and boots are a brighter shade of red and the gold looks a bit more lustrous. 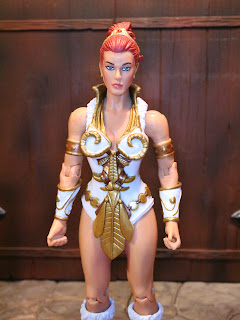 
* Teela looks fantastic. MOTUC is my favorite toyline of all time, so obviously I think the majority of the figures are incredible, but Teela has always been one of the standouts in the line. Super7's is even better than Mattel's version, though, probably due to the brighter colors. I love the gold color used here. Teela just looks fantastic! 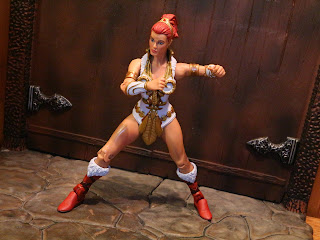 * Teela features the same articulation as the original figure (she was the first female figure in the line, FYI) and it's still pretty good. I love the MOTUC articulation scheme and while it's one of the things that more recent Super7 releases have improved on (they've since added better ankles and swivel/hinge wrists), Teela is still able to take on all the poses fitting of a warrior goddess. 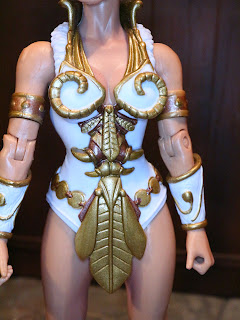 * Here's a closer shot of Teela's intricate armor. It's excellent and still a great tribute to the design of the original vintage toys and the work of the Four Horsemen translating the character into the MOTUC aesthetic. The paintwork here is excellent and rather intricate, too. 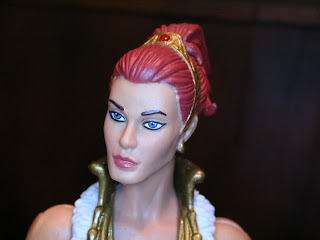 * Teela's standard headsculpt is her most recognizable appearance with her red hair pulled up into a short ponytail. She's gorgeous and the paintwork here improves the sculpt. The eyes are particularly well done. 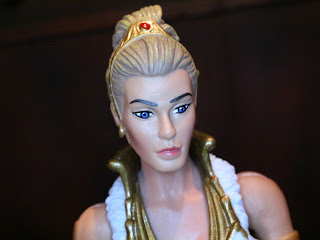 * Teela's second headsculpt is the same as the first but this time she has blonde hair. The early minicomics often depicted Teela as blonde, so this figure is a tribute to those earliest elements of MOTU media. I like this one a lot as it's nicely different and seems a bit more unique. 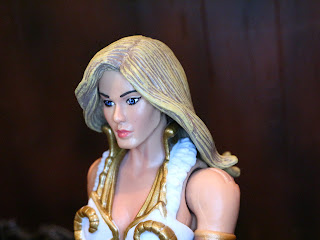 * The third portrait is a repaint of the long haired headsculpt from 2011's Battleground Teela. Another blonde depiction of Teela, this time from the original DC Comics miniseries, this version looks even better than he Battleground Teela version. The hair has more paint detail and the paintwork on the face feels a bit more intricate. 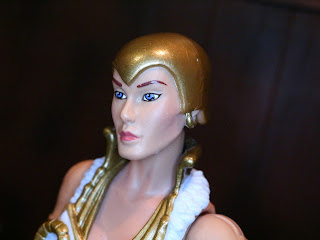 * Last, and perhaps least on its own (but better when paired with her armor) is the helmeted Teela. Maybe this one really isn't meant to stand on its own but it does present an armored version of Teela. The original MOTUC Teela had this same head, too. 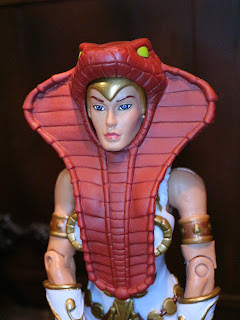 * To pair with the headsculpt above is Teela's snake armor. An interesting aspect of the vintage figure borrowed from the designs of the Goddess/ Sorceress character, the vintage toy Teela definitely stood out because of this unique armor. The red color is really nice and, of course, the eyes are bright and noticeable, too. 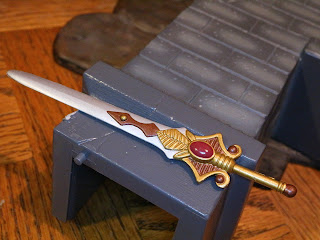 * Teela also includes her sword based on the accessory included with the 200x toyline Teela. It's the same as the MOTUC Teela's sword but it's still an incredible looking weapon with great paintwork. 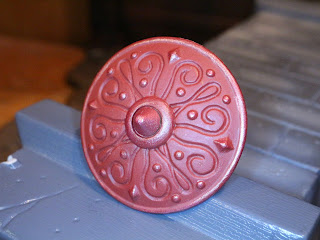 * Teela also includes her shield. It clips onto her bracers easily and it nicely replicates the weapon included with the vintage toy. 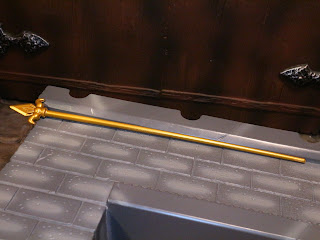 * Teela comes with the same spear that the Goddess came with, although that weapon probably was intended for Teela. While this spear doesn't include the painted tip that the Goddess' spear came with, it's still a nice accessory for a minicomic inspired Teela. 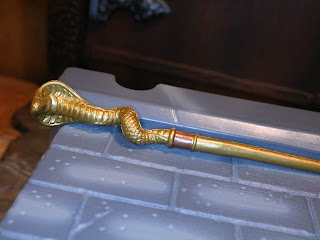 * Lastly, Teela comes with the Staff of Ka, the snake tipped staff that the vintage toy and orignal MOTUC Teela came with. It's identical to the MOTUC figure as I can tell as it's cast in the same gold plastic (Mattel did release a red toy version in the Great Unrest Weapons Pak). 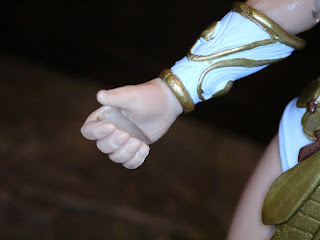 * Teela's hands are rather solid with little to no give to them. This has been a problem with many of Super7's figures (a few figures even included instructions to use a hair dryer to soften things up). 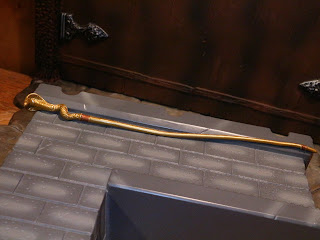 * The Staff of Ka looks excellent but the shaft of the staff is rather bent. This seems to just be a flaw from the packaging. Not a big deal (you could probably heat and straighten it) but it's interesting that the spear didn't have this issue. 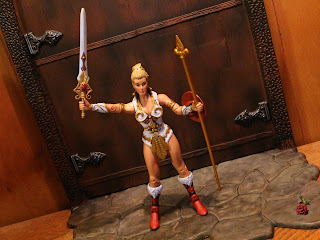 Yeah, I know this figure is tough to get a hold of now and rather pricey but, still, this was an Epic release. Other than Zoar and her perch, this figure comes with everything the original MOTUC Teela came with and then some. The alternate heads are really nice and even the standard Teela head is improved. This will probably become my default Teela at this point while the original Teela may become my standard Snake Armor Teela. It seems that things are currently up in the air with the future of Masters of the Universe Classics as Mattel may be wanting to take the line back from Super7 soon so these may become more coveted in the future. Time will tell!


If you're a Teela fan, I've reviewed a couple of Teela toys such as the M.U.S.C.L.E. green Teela and the standard M.O.T.U.S.C.L.E Teela and the Mega Construx Teela from the Battle for Eternia Collection.

For more Masters of the Universe Ultimates from Super7, check out the following:
He-Man (Filmation)
Skeletor (Filmation)
Posted by Barbecue17 at 5/11/2019