Minifigure Review: Man-At-Arms from Masters of the Universe: Mega Construx by Mattel 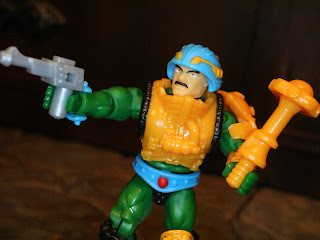 Since I reviewed Evil-Lyn yesterday I'm going to review her Series 4 wave mate, Man-At-Arms, today. Man-At-Arms is one of the original Masters of the Universe crew and I'm sore long term collectors of this line are glad to finally have him. Mattel seems to definitely have some plans for MOTU in the Mega Construx line as we know more figures are coming (Stratos and Scareglow) as well as a 3600 piece Castle Grayskull set. I'd love to see more figures in the line before we escalate things so quickly but this seems to imply Mattel has a lot of faith in the license (or at least the iconic Castle Grayskull). Let's take a look at this new minifigure of Duncan, the Man-At-Arms, after the break... 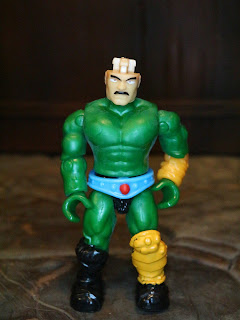 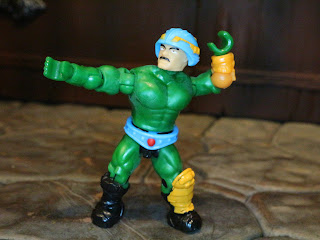 
* If you haven't played with one of these yet, you need to. They are very, very impressive. The articulation is incredible! Seriously, these are some of the most well articulated toys you will find. They're durable, poseable, and really, really fun. Heck, you can even customize them easily, too. These are pure hand candy! 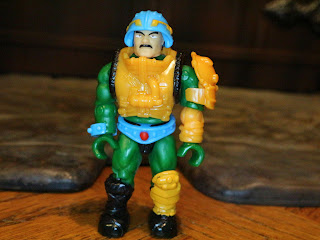 * Duncan looks fantastic. Just like the vintage and MOTUC version of the figure, this Man-At-Arms has removable chest armor and a removable chest pauldron (the leg and forearm armor are part of the sculpt). The colors are great and everything looks very impressive. Stylistically, it really feels like the meeting point between a vintage MOTU figure and a MOTUC figure, only tiny 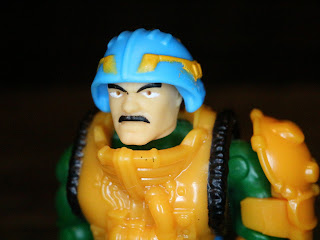 * The headsculpt is pretty nice too, especially considering it's about the same size (or smaller) than the head of a cotton swab. The helmet is technically removable but all that's underneath it an oddly shaped head. This version of Man-At-Arms features his iconic stache (which the vintage figure didn't have). A stacheless version is coming packaged with Castle Grayskull. 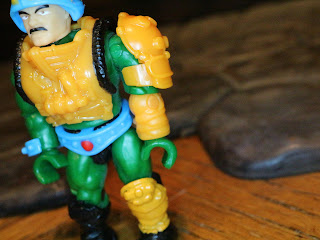 * I love the giant shoulder pauldron. It does limit the articulation a bit but it's incredibly cool looking. 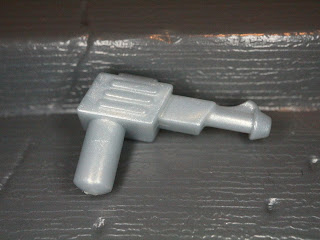 * Man-At-Arms comes equipped with a laser pistol. This pistol is based on the design of the weapon included with the vintage Castle Grayskull's weapon rack. In MOTUC Man-At-Arms came equipped with this weapon, so his version of the character continues that trend. It's a coll little pistol design that captures the old-school looking sci-fi of MOTU. 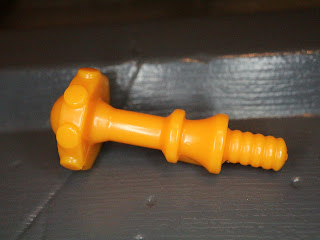 * Man-At-Arms also comes equipped with his classic orange mace. It's one solid piece and features some nice detail work to reflect the vintage toy's design. 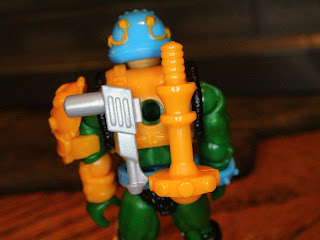 * Taking another cue from the MOTUC version of Man-At-Arms, both the pistol and the mace can be stored on the back of the armor. Both the mace and the pistol have a tiny hole in them that fits over a peg on the armor. It's a cool feature and really makes for a fun toy. 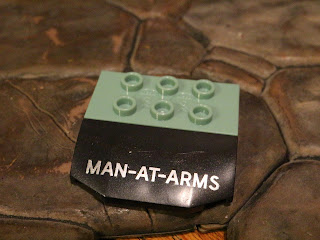 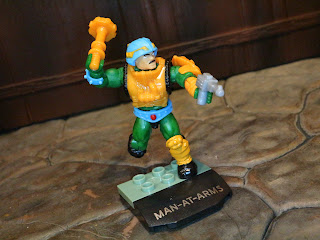 Man-At-Arms might be my favorite figure in this line yet. His design is superb, he has some excellent accessories, and having the ability to stow his weapons on his back just makes for a really fun feature. I'm really enjoying these and I hope Mattel continues to release these, possibly at a somewhat faster pace. I obviously have my favorites (i.e. Moss Man, She-Ra, Mosquitor, Grizzlor, and Ram Man) but any new figures would be welcome, especially those early figures from the first two years of the vintage line. These are some of the coolest MOTU figures ever and Man-At-Arms is an Epic addition to their ranks.

If you're a fan of Man-At-Arms, I've also checked out the M.U.S.C.L.E. figurs from the #1 Masters of the Universe Set (Green) and the original He-Man, Teela, & Man-At-Arms set.

For more Masters of the Universe: Mega Construx reviews, check out the following:
Battle for Eternia Collection
Evil-Lyn
Posted by Barbecue17 at 2/19/2019