31 Days of Toy Terrory Returns: Clown from The Nightmare Before Christmas by NECA 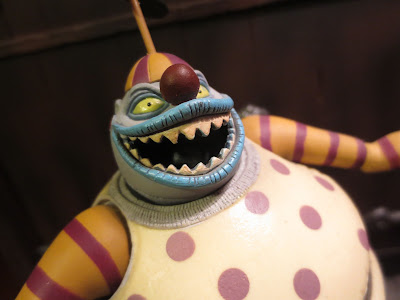 True terror often sets in when we see something that we find comforting, familiar, or amusing corrupted. Perhaps that's the reason that so many people are afraid of clowns. They're supposed to be funny, reminding us to smile and laugh. Not every clown is a laughing matter, however...

Between 2004 and 2007 I was a huge fan of NECA's amazingly expansive The Nightmare Before Christmas line. While I wasn't able to collect everything in the line (I stupidly ignored a number of the multipacks and vehicles) I did manage to pick up most of the figures. While many of them were unfortunately a bit fragile, they did feature some of the finest sculpting seen on toys up to that point. NECA beautifully captured the character designs from the film. Not only did they release the main cast, however, but they also got around to releasing some excellent background characters. One of my particular favorites has always been the Clown with the Tearaway Face, voiced by Danny Elfman, and I went nuts went NECA produced him in the line's sixth series around 2006. I've had this guy since I purchased him new, probably at a Media Play or something. Put on this song and prepare for some spooky fun after the break... 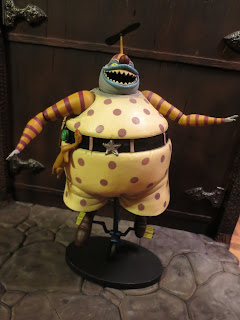 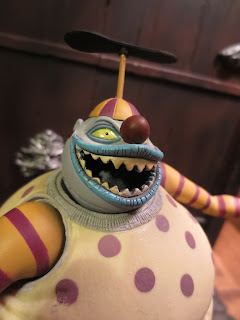 * There's no doubt about it that this figure is incredible looking. NECA did a near perfect job of capturing the Clown's maniacal expression, unusual proportions, and garish wardrobe. Even though he really doesn't have a Tear Away Face (and yes, I've tried) he still is quite possibly the greatest evil clown figure I've ever seen. The beanie cap and propeller are excellent and really add to the bizarre sense of whimsy this character exudes. 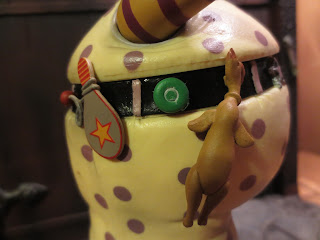 * I love all of the little details on the Clown, particularly the little extras on his belt. He's got a ball and paddle, a yo-yo, and a rubber chicken. Is there anything else a crazed clown really needs? 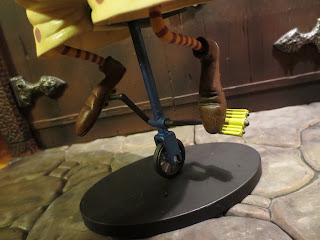 * Due to the incredibly odd nature of the Clown's character design, NECA opted to make the unicycle a permanent part of the sculpt. The clown's body is incredibly light and hollow and he balances nicely on the unicycle. It has a metal rod in the poll that comes out below the wheel. You definitely need to use the included stand to keep the Clown upright. it works wonderfully, though. 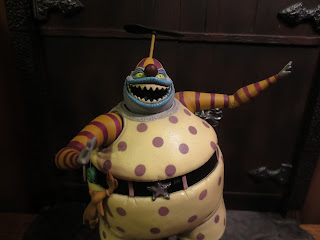 *While many of the NECA Nightmare Before Christmas figures had awesome articulation, the Clown is definitely more of a display piece than a toy. I believe he is absolutely a nerd Hummel, as Michael Crawford would probably say; this guy needs to just sit on a shelf and look awesome. The arms and head allow you to add some character to the pose, but you're not going to be doing much else. 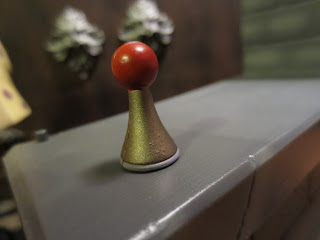 * Most of the figures in this series came with a plethora of beautiful and amazing accessories. Perhaps it's due to his size and shape, but the Clown didn't he only came with the stand required to keep his unicycle standing and the small air horn he uses to frighten/ annoy people. It's a cool simple accessory but look at the Clown's hands: How the heck is he supposed to hold this thing? He can't. There is no way to make this work. Bummer, man. 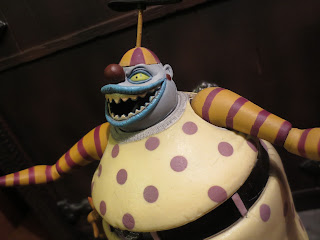 I've loved this figure ever since I bought. It definitely feels a bit fragile but mine's still trucking. It also sucks that the Clown can't hold the horn properly, so mine's always had his horn standing at the base of his stand. While this is the kind of toy you just put on display and admire, I can't fault it for that as it does it's job well. Whether they love them or hate them, everyone notices a clown, and this Clown is ready to raise some Halloween horror. He's a Great and a 1/2 figure and a fun addition to any Nightmare Before Christmas collection.