The Revenge of 31 Days of Toy Terror: 20 Pack Figure Collectors Set from The Nightmare Before Christmas Nano Metalfigs by Jada Toys 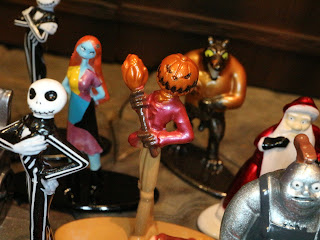 If you read Action Figure Barbecue often then you know that Jada Toys' DC Nano Metalfigs line is one of my favorite active toylines. I haven't picked up all of the other Nano Metalfigs line (although I do have the Street Fighter series) but I've been anticipating their The Nightmare Before Christmas line ever since it was first announced. The Nightmare Before Christmas is one of my favorites and this year is the 25th Anniversary Celebration so we are getting lots of cool product. It's pretty crazy to be celebrating like this that has become so nostalgic while still remembering my parents taking me to see it in theaters as a kid when it was first released. Jada Toys only has three releases announced for this property thus far and the first is what I'm checking out today: The 20 Pack Figure Collector's Set. The set includes 20 diecast metal minifigures covering the majority of the residents of Halloween Town and Santa Claus himself. Ready for a closer look at one of the most ambitious The Revenge of 31 Days of Toy Terror reviews yet? Then join me after the break... 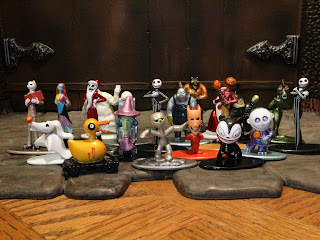 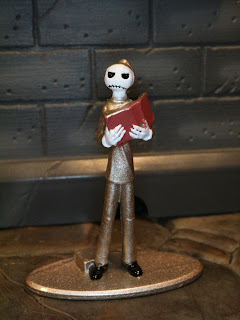 
* First up is Pajama Jack. I do want to point out that Jada Toys numbers these for easy reference and the Nightmare Before Christmas figures are labeled as part of the Disney Series even though the packaging doesn't call them out as being part of it. Anyways, here is Jack decked out in his pajamas while staying up all night trying to understand the magic of Christmas. He has a somewhat perturbed look on his face and is carrying one book open in his hands while another is resting on the ground at his feet. 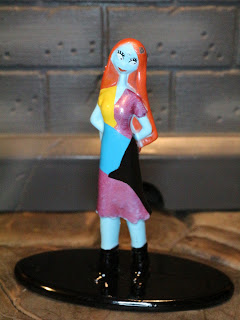 
* Of course we have to have Sally, right? Sally is the co-star of the film and such an inspired, colorful character. Her outfit is rather complex and looks quite nice in this scale. Heck, I'm even impressed that she has eyelashes (remember, these are smaller than 2 inches). Her hair does have a small paint error, though, as you can see the bluish spot on it. I might have to fix that. 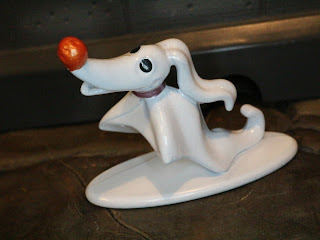 * There are a few Nightmare Before Christmas figures that I love better than all of the rest and Zero is one of them. Reminding you of your best doggie friend, Zero is loyal, insightful, and always trying to get you out of whatever funk you might be in. Zero is portrayed as being a bit larger than he should be in scale but it really works with these little guys. He is easily one of my favorite figures in the set! 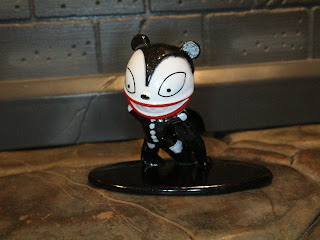 * So, has anyone else ever realized that the Scary Teddy that the Halloween Town residents make as a Christmas gift resembles the cat logo for Schreck's Department Store from Batman Returns? Crazy, right? I like that Jada Toys is offering some of the more unusual characters/ toys in this series and the Scary Teddy is a inspired inclusion. I love how it looks as if it is chasing after some unwitting and confused children! 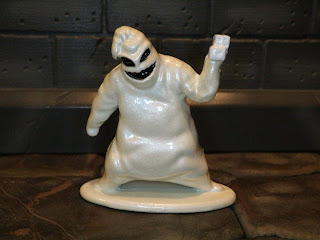 * Here's another of my favorites: Oogie Boogie! If I see Oogie Boogie merchandise, I'm often rendered completely incapable of resisting it! He's just such a fun character. Oogie is sculpted to look quite large and lumpy, which suits him well, and is molded in an off white. Often the tendency with toys is to make him green, as he appears when the black lights in his lair hit him, but I like the white look best (though a repaint would be A-OK if Jada plans to expand the line). I like that his dice are even sculpted in his hand (though they should be red). Snake eyes!? 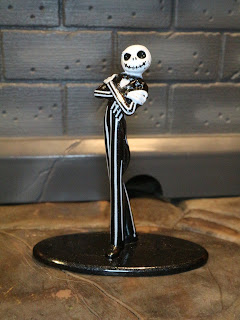 * This set includes five different Jack Skellington figures and this one is kind of your standard Jack. He's in his iconic black and white pinstriped suit with his arms crossed. The detail on the face is excellent. Again, considering how small these are I am very, very impressed. 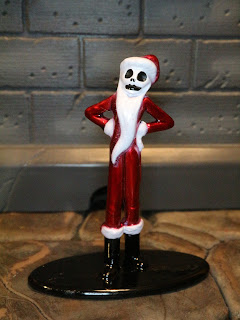 
* We gotta have Jack in his Santa Claus outfit, don't we? Here Jack looks absolutely overjoyed! I love the happy pose and expression here. Yeah, I know things don't quite work out for Jack's take on the holiday, but you gotta give him credit for trying something new. The metallic red is as crisp as a holly berry here and looks just wonderful! 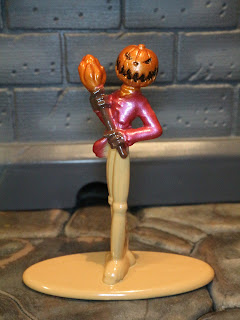 
* Here he is! Jack Skellington in his Pumpkin King guise is one of my favorite character designs out of anything ever. I love this guy (he's kind of an inspiration to me) and I think Jada did one heck of a nice job here. The pumpkin head is beautifully sculpted, the jacket is a nice maroon, and I love the inclusion of the torch. This one is an A+ winner in my book, though I know I am biased. 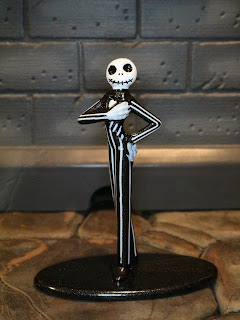 
* This is the second "basic" Jack in the series and this one looks a bit more friendly and kindly. Rather than standing with his arms crossed and head cocked, like on DS87, this Jack seems to be thanking everyone for their applause at this performance. Jada Toys did a really nice job on the pinstripes as they are quite neat and clean here. 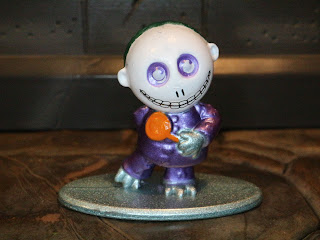 * I love that Jada Toys gave us Lock, Shock, and Barrel all together in one set! Barrel definitely looks like he's trying to play the role of a nice, innocent trick 'r treater but he also has one hand hidden behind his back where he is crossing his fingers. He's also clutching an orange lollipop, one of his favorite treats. 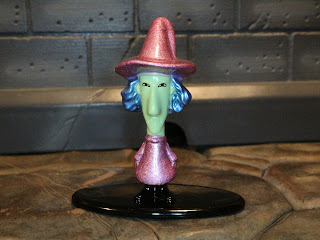 
* Shock is standing straight up and looking a bit stilted. The work on the sculpt of her mask is great, though, as are her eyes. Maybe she's awaiting some orders from Oogie Boogie? 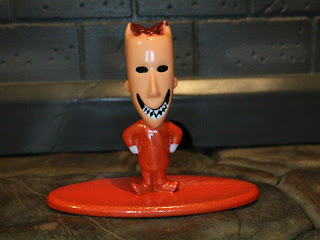 * And here is Lock! Check out those teeth on his mask? Despite being dressed as a devil he certainly looks like he's trying to play himself off an an angel, doesn't he? 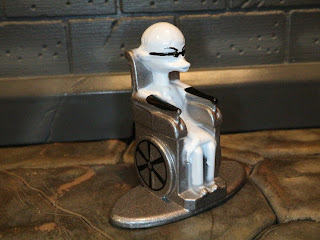 *Dr. Finklestein is a rather impressive and ambitious minifigure. He's in his wheelchair and while the sculpt is a bit unrefined, he is still quite recognizable. 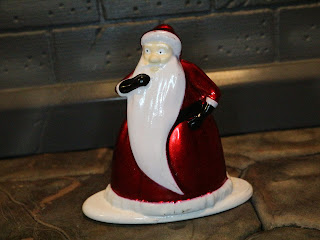 * I love that Santa Claus is included in the line! Jada Toys did a great job of capturing the Nightmare Before Christmas' Santa Claus style here, particularly his face and his beard. He's quite large and definitely looks a bit bigger than most other Nano Metalfigs. 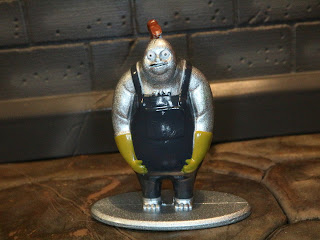 * The resident oversized hulking guy with an ax stuck in his head of Halloween Town, Behemoth is easily recognizable. Jada Toys did one heck of a nice job on this guy. My only complaint is that the ax stuck in his head is missing much of a handle. This was probably a molding requirement but it definitely is noticeably missing. 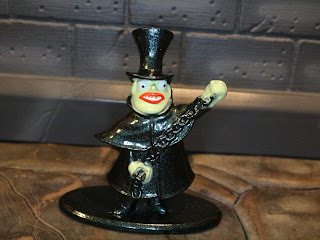 * Probably one of the more "obscure" characters included in this set, Mr. Hyde is the Halloween Town resident that ensures us he searched the Pumpkin Patch for the missing Jack Skellington. I do wish he had the pumpkin stuck on his foot (remember how NECA's figure had that?) but this one is perfectly serviceable, too. 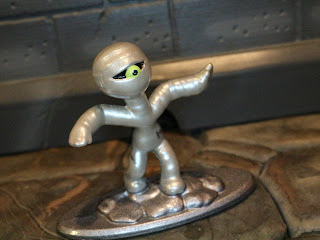 * One of the kindly young residents of Halloween Town, the Mummy Boy is a juvenile cyclops mummy who pals around with the Winged Demon and the Corpse Kid. He's a cool little character and, for some reason, Jada's rendition of him reminds me of Blinky from Bucky O'Hare. * The Wolfman is one of the more popular background residents of Halloween Town because, let's be honest, who doesn't love a wolfman, right? He looks pretty cool and is a bit larger than most other figures although, like Dr. Finklestein, his sculpt isn't as sharp due to his arms and tail being posed right next to his body. His shirt is also not detailed with plaid like you would expect, especially considering the nice work Jada did on figures like Sally and Jack with their clothing details. 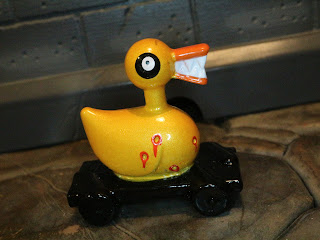 * Here is the Halloween Town toys that I'm absolutely nuts about: The Duck Toy! It cracks me up that the Halloween Town residents decide it is a good idea to give kids a toy duck with bullet holes in it. The bullet hols even have a bit of blood dripping down. The duck is massively oversized compared to everyone else, but who cares? This guy is crazy incredible! 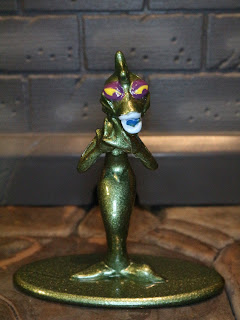 * Last, but not least, is the Undersea Gal. This feminine take on the traditional Creature from the Black Lagoon is fantastic. I love her sculpt, the paintwork on her eyes, and the ghastly green color she is molded in. 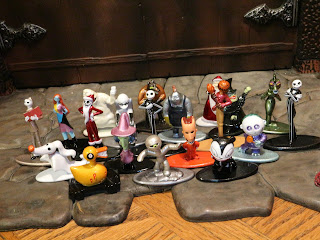 Considering that with this set you are getting 20 unique diecast metal minifigures from The Nightmare Before Christmas for $20 dollars, I think that is a pretty solid deal. The character selection is solid here although I do question the absence of the Mayor. He usually is treated as one of the main 5 or 6 characters so his absence is kind of bizarre. I also wish Jada Toys released the Clown with the Tearaway Face, but that's just because he's one of my favorites. These are incredible miniatures and an Epic purchase for Halloween. I will note that Jada Toys also has a 5-pack of figures available, but all 5 figures are duplicates from this set. That hasn't been the case with the other Nano Metalfigs 5packs (they usually include some unique releases) but if you buy this set you can skip that one.

If Zero is one of your favorite dogs check out my review of the 1993 Applause Zero.

If you're down with the Boogie Man check out these other Oogie Boogie reviews: The Diamond Select Oogie Boogie (Toys 'R Us Edition), the ReAction Oogie Boogie, and the Jun Planning Trading Figures Oogie Boogie.

For more Shock, check out the ReAction Shock.

If you're in to the Wolfman, I've also reviewed the ReAction Wolfman.

These are actually the first figures of Sally, Scary Teddy, Barrel, Lock, Dr. Finklestein, Santa Claus, Mr. Hyde, the Duck Toy, and the Undersea Gal that I've reviewed!
Posted by Barbecue17 at 10/17/2018