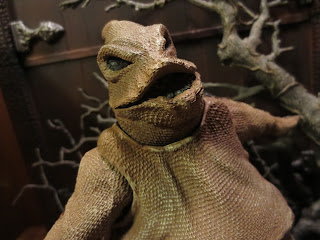 Oogie Boogie is one of my favorite bad guys ever. He's the boogeyman portrayed as an old fashioned nightclub singer (voiced by singer and actor Ken Page) who's actually a giant sack full of bugs. What's not to like? The Nightmare Before Christmas is without a doubt one of the most toyetic films ever made and everyone knows it: I can name at least 10 companies who have released toy lines based on the movie right off of the top of my head. I had the original Hasbro Oogie Boogie as a kid but I somehow missed out on the cool Oogie Boogie versus Jack 2-pack from NECA that was released in the mid 2000s. Now that Diamond Select is taking a swing at The Nightmare Before Christmas I knew I was going to have to pick up Oogie Boogie to supplement my NECA collection. If you're at all familiar with Diamond Select's action figures, you know they typically run around $25, are usually a bit larger than your average action figure, come packaged in an elaborate blister card, and feature some very nice display bases. Over the past few years Diamond Select has been releasing some less elaborate versions of their figures at Toys 'R Us as exclusives for around $12-$15 dollars. Typically these figures feature a paint difference, different head sculpt, or are simply missing the elaborate bases and dioramas of the mainstream figures. That's the case for Jack and Sally, two of the figures in Diamond Select's first series of Nightmare Before Christmas figures, but it's not the case for Oogie Boogie. The $25 Oogie Boogie you might purchase at your local comic shop or offline is exactly the same as the $13 Oogie Boogie you'll find at Toys 'R Us. I have to admit that I've never seen an action figure company truly release the exact same figure at two different price points. How bizarre? Just note that when I'm reviewing this, I'm reviewing this as a $13 figure I bought at Toys 'R Us while on an epic toy run with my 2 year old last month. Ready for a closer look at Oogie Boogie? Then join me after the break.... 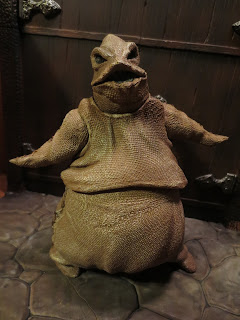 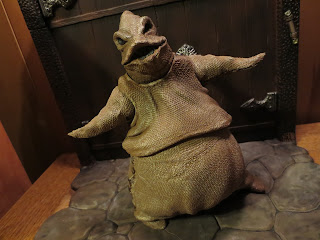 *Oogie Boogie is big, heavy, and has a great presence to him. He looks just a tad shorter than the Diamond Select Jack Skellington but he still seems like he's the right size. He's a really heavy figure. I think you'll be pretty impressed when you pick him up. He's one of those figures like Mr. Wink from Mezco's Hellboy line or the Arkham Asylum Clayface and Solomon Grundy
that just impressed you with it's weight. 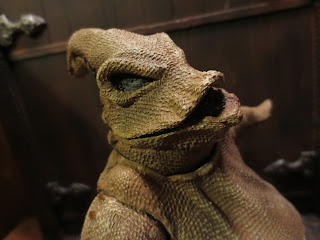 *While Oogie Boogie is nothing but burlap and stitching, the magic of the character is how his facial features and body language are expressed through the simple folds of the material. Diamond Select nailed Oogie Boogie's look and posture perfectly. He manages to simultaneously look menacing and as if he were about to burst into song! How many figures do you own that you can say that about? 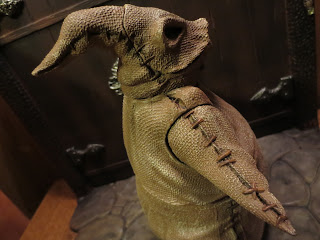 * While he's an action figure made out of hard plastic, the texture of the figure really goes a long ways towards making sure that Oogie Boogie resembles a simple creature stitched together from burlap potato sacks. The texturing is incredible and the stitches, while a bit soft, are still pretty cool looking. While I do tend to think of Oogie Boogie as being green, that's because of the black lights used in his lair. It's cool to have a figure of the character in his natural appearance. 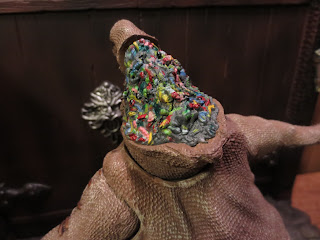 * Oogie Boogie comes with no accessories except his removable face which does come off (it's tough at first and you'd never know it if someone didn't tell you) to reveal a head full of bugs. It's not necessarily a movie accurate feature here but it's a cool little extra that gives the figure a bit more interactivity than just standing around looking menacing. I love the mixture of colors here for all of the different insects! 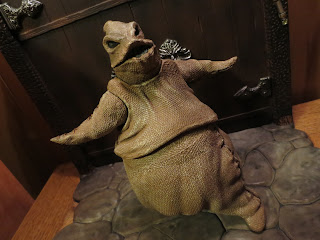 *The real downside to this figure is that he's really limited in his articulation. While he's a character who's basically a giant potato sack, the design doesn't leave a lot of room for articulation when interpreted in plastic. A bit more range in the joints, particularly the head, would have been welcome. As it is, Oogie's a little bit stiff. 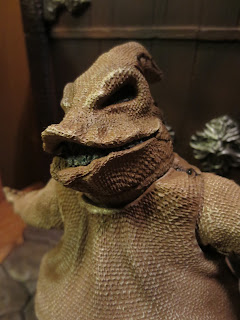 I'm still really shocked that I only paid $13 dollars for this figure. It's a massive chunk of plastic! The sculpt and paint are excellent. I do wish the articulation were a bit better, though. Still, for fans of the character, this guy is hard to pass up. I have to say, though, that unless you're obsessed with the standard Diamond Select packaging you really need to track this guy down through Toys 'R Us. There's no reason to pay twice the money for the figure if you don't have to. While Jack and Sally feature unique features for each figure, Oogie really is exactly the same. If you manage to get him through Toys 'R Us at $13 bucks, though, consider him a Great and a 1/2 figure. He's a real bargain at that price and will definitely make a great addition to your Nightmare Before Christmas collection.


I've only reviewed a few other figures from The Nightmare Before Christmas on the site:

The Nightmare Before Christmas by NECA
Clown