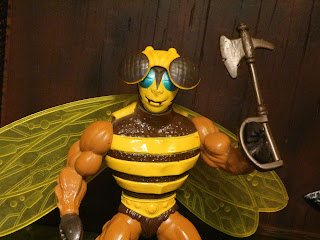 The 1984 series of Masters of the Universe figures, vehicles, and accessories was the second largest year of offerings for the vintage toyline (only 1987 had more releases) and offered up new Heroic Warriors and Evil Warriors to collect. For the first installment of the celebration of Masters of the Universe Month 2022 let's take a look at Buzz-Off, one of the Heroic Warriors released in 1984. I never owned Buzz-Off as a kid and I always kind of wanted him so I finally picked up a vintage one back in 2010. He's a fantastic looking figure who is instantly recognizable as a MOTU character. I seriously believe that Buzz-Off is so recognizable in the franchise that Pixar based Twitch from Toy Story 3 on him. Doesn't that design just seem like a tribute to not just MOTU in general but specifically to Buzz-Off? I'm excited to give this guy a once over. Let's check out Buzz-Off, the Heroic Spy in the Sky, after the break... 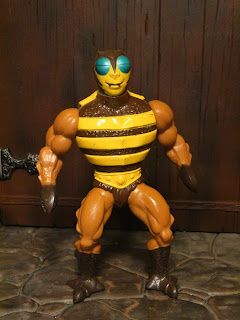 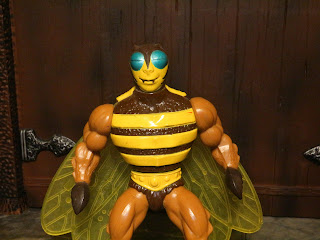 The Positives:
* Buzz-Off is such a fantastic looking figure. Besides just looking like a bee-guy (which is a pretty big deal all by itself) Buzz-Off has a fantastic color scheme. The yellow and brown look really good together and the sculpted details on his body like the texture on his torso and the details on his arms (lots of spikes and ridges) definitely help him stand out from most other figures in the line so far. 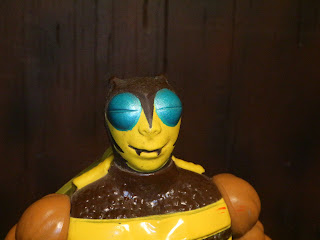 * Buzz-Off's headsculpt makes him look pretty friendly rather than being overly fearsome. Maybe he's just a happy, go luck bee? His eyes are great with a cool metallic blue sheen to them. I like the portrait quite a bit as it has a lot of personality. 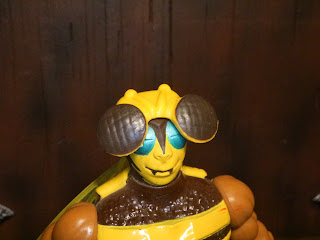 * Buzz-Off is another MOTU character whose natural abilities seem to be augmented by technology. To aid in his role as a spy he's sporting a helmet with some larger, segmented eyes on it. It fits over his had and gives him a different appearance. It's an unusual concept but I do kind of like it. Oddly enough, there are antennae sculpted on the helmet. Are these meant to be his real antennae or are these artificial ones that augment his natural abilities too? 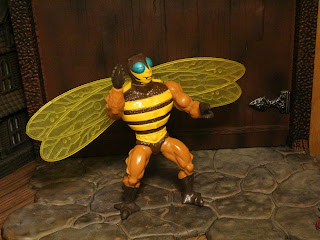 * Most of the vintage MOTU figures have nearly the same articulation and while Buzz-Off does have a mostly new body, he's no exception. The vintage MOTU figures may not be overly articulated to modern standards but the dynamic, battle ready pose certainly made them incredibly fun to play with as a kid. Buzz-Of looks like he's ready to fly off on a reconnaissance mission! 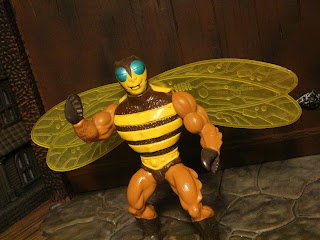 * Buzz-Off further benefits from some large wings. They are removable (they fit on a tab on his back) and you can rotate them around to different flying poses. 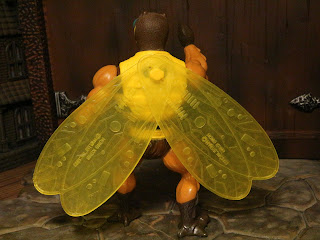 * They're translucent and have a cool design on them. They almost look like they're mechanical in nature, too. Don't the little details on the wings look like some sort of technology versus being actual insect wings? 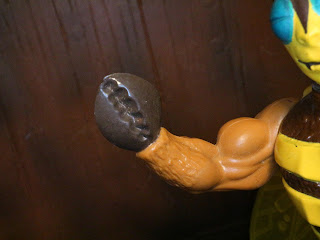 * Buzz-Off doesn't have hands. Instead, he has pincers. Claw-like pincers. 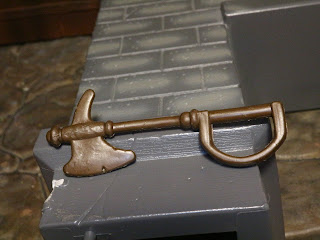 * Buzz-Off maybe can use his claws for battle but he also comes with an axe. It's similar to the axe that came with the Castle Grayskull playset but rather than a standard handle it has been remolded with a loop on the end.

* Buzz-Off also came with a minicomic (not pictured). He came with either He-Man and the Insect People or He-Man Meets Ram-Man!" depending on when he was released. 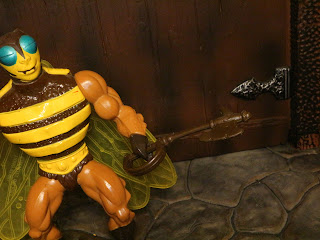 * My only real negative with Buzz-Off is that it's so awkward how he has to hold his axe. You can either use the handle loop to somehow put it over his claws or you can put the axe in his left hand where it sits sideways. There's no way that doesn't look and feel awkward for the figure. 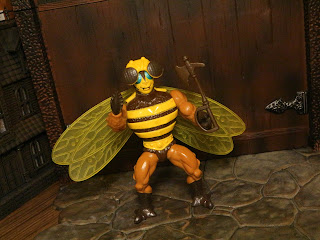 Buzz-Off is a super recognizable figure from one of the most iconic toylines of all time and he's absolutely Epic. Yeah, it's weird how he holds his axe, but he's got wings, he's got a great color scheme, a fantastic design from designer Colin Bailey, a crazy helmet, and a minicomic. Oh, and claws for hands. Seriously, what more do you want from Buzz-Off? He's a great MOTU figure and one that I'm kind of sad I never had as a kid. I have him now, though, and I'm glad he's on my shelf to give the Heroic Warriors a hand. Buzz buzz!