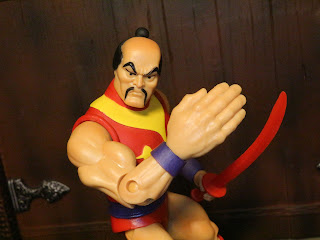 Let's kick off the Masters of the Universe Day celebrations with a look at Chopper!
Hey wait a minute... this isn't Chopper! It's Jitsu! Actually, yeah, it is Chopper, too. In the Filmation animated series He-Man and the Masters of the Universe Jitsu only appeared once (in the 1983 episode "The Dragon Invasion") and there he wasn't even referred to by name. It was in the Filmation series bible that he was referred to as Chopper, so when Super7 released the Filmation version of Jitsu as a 2018 PowerCon exclusive they named him Chopper as a tribute. Jitsu/ Chopper appeared on the cartoon about a year before Jitsu debuted in the 1984 toyline, probably as Mattel was working on the toy designs. Filmation was reluctant to use Jitsu, fearing he would be perceived as a negative racial stereotype, so he never appeared again. Jitsu is a moderately popular character, though, particularly because of his conflict with Fisto since they're both awesome warriors with swords, cool facial hair, robotic horses, and massive metal hands. Well, the Filmation version of Jitsu doesn't have a metal hand. He just has an oversized hand similar to some early concept art for a character whom I believe was called Hand-some. I haven't seen anything concrete making a connection between the two (I believe Handsome was intended to be a hero, so he could have inspired Fisto). Let's get things started and check out Chopper after the break... 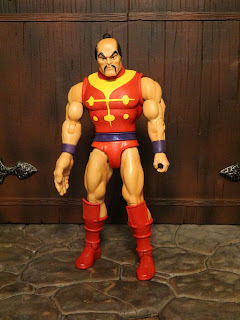 Original Retail Price: $50 dollars or $135 in a set of 3 with Spikor and Uncle Montork & Dree Elle 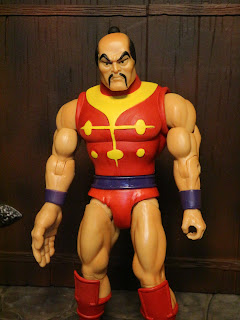 The Positives:
* Mattel began releasing Filmation inspired figures that were similar to Masters of the Universe Classics in 2016 and when Super7 took over MOTUC they also began releasing their own Filmation inspired toys with a more animated appearance. That's what we've got with Chopper here. While the arms and legs are probably standard parts uses on other figures, the torso is new and is much smoother and more plainly colored than MOTUC Jitsu. It's a pretty good likeness of what the character wore in the show and the bright, bold colors stand out nicely. 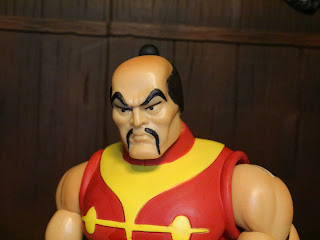 * Overall this is a pretty solid animated portrait of Jitsu/ Chopper. Super7 did add eyes which I think was a wise decision compared to the Filmation character model. He has a really cool mustache and a very stern look to him. 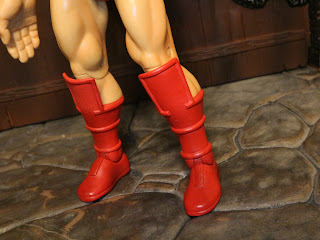 * Chopper also has some very neat boots. The front shin guards actually extend up above the boot swivel joint, almost to the knees, which I really like. They seem like a completely unique sculpt and help give the figure something special. 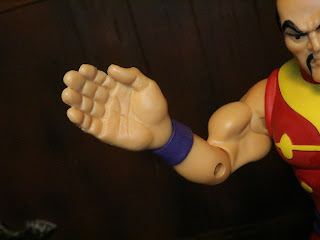 * Now why do we love Jitsu so much? It's because of his giant right hand. Since Fisto has a massive punching fist it only stands to reason that Chopper would have a giant karate chopping hand. The Filmation version wasn't metal so Super7's isn't either. It's just massive. In the series bible the hand was Chopper's major feature and was described as enormous and able to chop through anything that gets in Chopper's way. Can you imagine Jitsu walking up to someone and asking them what the five fingers said to the face? I can. 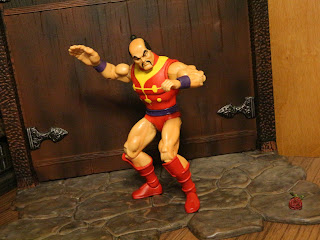 * While Super7 has improved the articulation on these figures overall by including swivel/hinge ankles and swivel/hinge wrists, Chopper/ Jitsu has more limited articulation because of his sculpted chest armor, meaning he has no torso articulation. His right wrist is also just a swivel joint. He's still fun and sturdy, though, and you can pose him in plenty of fun, slap-a-riffic poses. 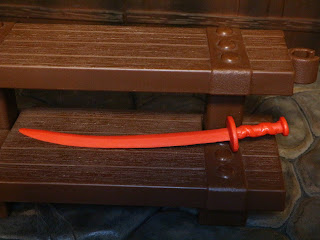 * Super7 threw in a simplified version of Jitsu's classic Katana, though it's more red here than orange. 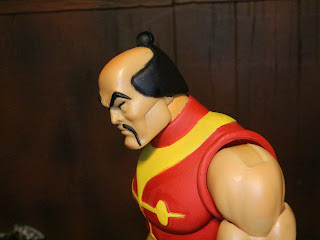 The Negatives:
* Chopper's hair, though not very long, seems to block his neck joint. He's kind of permanently looking down which is a bit of a bummer. 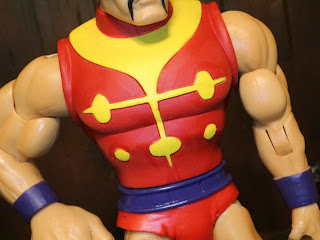 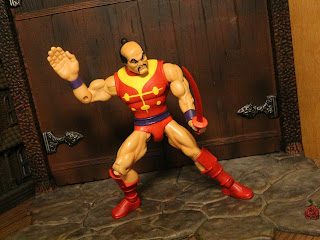 Chopper was definitely a surprise as a PowerCon 2018 exclusive, especially considering he only appeared in the cartoon one time. He was also quite pricey. At $50 bucks, well, Jitsu was definitely overpriced (though now you're looking at $200 or more). He only comes with one accessory for crying out loud. He's also got some other issues like the permanently downcast head and the paint issues on his chest. He really gets an Eh from me. He's just not as good as he could be and definitely still feels overpriced for a figure with so few features. If you're a fan of the character or wanting a complete Filmation inspired line then you'll inevitably want him, but he's defnitely one of the weakest in the line.