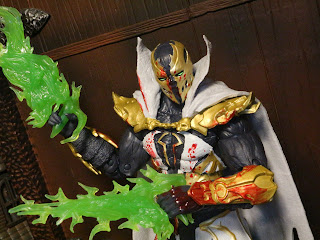 Are y'all ready for some Mortal Kombat reviews? OK, while I definitely like the character designs for Mortal Kombat and enjoy the original movie (haven't seen the newest one yet) I've never been a big fan of the games themselves. I'm more of a Street Fighter fan. The last Mortal Kombat game I played was Mortal Kombat vs DC Universe... so it's been a minute. What turned me on to picking up some Mortal Kombat figures, then? Spawn, baby. Spawn. I've seen many of the Spawn figures from the Mortal Kombat XI toyline by McFarlane Toys but while perusing GameStop the other day I stumbled upon the two new bloody variants. Not only did these look awesome but they were on sale as well (maybe 20% off?) so I snagged two of the new Spawn figures. So, yes, Spawn is a character in Mortal Kombat 11. He was introduced in Kombat pack 1 as a guest character but seems to have received more figures in the Mortal Kombat 11 line than any other character. Kind of funny, right? Hey, Spawn sells. The first of the two new figures I picked up is Malefik Spawn (Bloody Disciple), a blood splattered Spawn variant based on one of the in-game skins simply called The Disciple. I picked him up because he's cool looking and the blood splatter effect is just fantastic. Let's take a look at Malefik Spawn (Bloody Disciple) after the break... 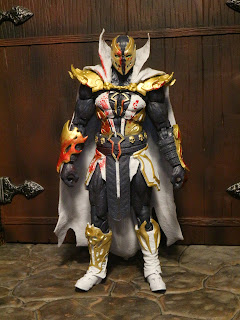 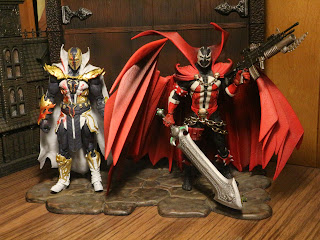 Comparison:
* For the sake of comparison/ showing off, here's a look at this Malefik Spawn (Bloody Disciple) figure (on the left) and the Kickstarter Classic Spawn on the right. Yeah, I picked him up from Toy Federation in Greer, SC earlier this month. Score! These are completely separate figures with no shared parts though they do scale well and look great together. I believe all of the Mortal Kombat Spawn figures do share some basic body parts and the Malefik Spawns all seem to use the same body. 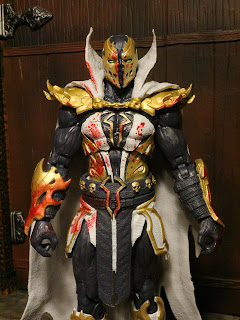 * I'm really enjoying Spawn (I'm reading the compendiums and just finished the Exterminator story arc) but even more important than the story is that Spawn just has to look cool. This version of Spawn definitely looks like he's been armored up and stylized for the Mortal Kombat tournament which makes him pretty cool. Clad in dark grey and white with gold highlights, this is a pretty eye-catching take on good ol' Al Simmons in his Hellspawn garb. I love the crazy gold shoulder pads and the gold skulls on his belt. All of the costume details are well sculpted, too, so there's a lot of unique texture here to admire. 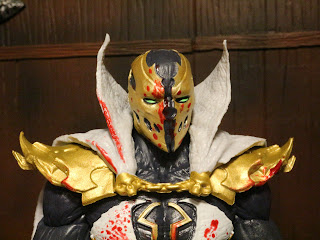 * Rather than a flat, superhero styled mask, Malefik Spawn looks like he's wearing a metal mask. The gold looks really cool, especially with those striking green eyes. There's some weird cuts in the mask around the mask area that sort of give off the impression of a mouth that has been stitched closed, kind of like how Spawn's mouth is sometimes portrayed when his mask is off. 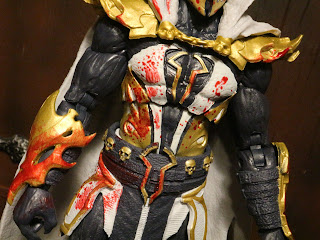 * I like the costume and design of tis figure but what really caught my attention is the blood splatter effect. It's fantastic. Seriously, McFarlane Toys has always done excellent work on their blood splatter effects (NECA can do solid work, too, but McFarlane is king here) and it was pretty cool to see this on the shelf at GameStop. There's a few splatters on his chest and waist, some smeared on his gauntlets, and some spattering on his shoulder pads, collar, and mask. Not overdone but highly noticeable and quite realistic. Since it's red, you know it's not his blood, either. 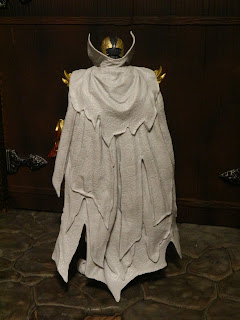 * I think all of the Mortal Kombat Spawn figures so far share the same cape. It's not removable but it is fairly pliable and it looks cool. It's nice and layered looking (through it really is just one piece). 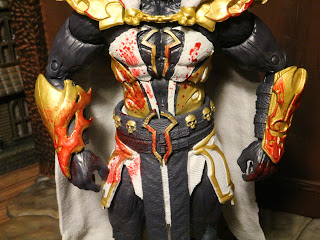 * Spawn just oozes coolness and he's always been a fan of asymmetrical accessorization. His left gauntlet is a bit plainer with some decorative flourishes while his right gauntlet looks like a gold plated bird skull. Or something. Anyone recognize the skull? Maybe it's just decorative? 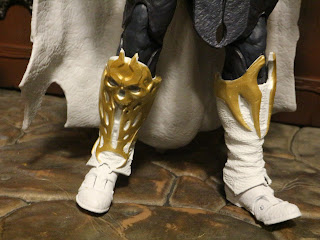 * Spawn is also rocking some asymmetrical boots. the left just has a gold design on the cuff while the right is more intricate and adorned with a skull. 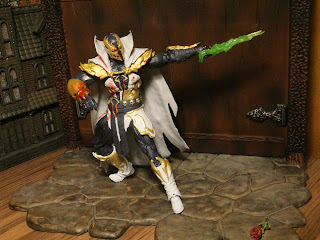 * The articulation is excellent on this version of Spawn and the plastic quality is excellent, too. Very sturdy and durable with nothing fragile or brittle. Other than the limitations imposed by the presence of the cape everything else works great and has a fantastic range of movement. He's even sporting articulated toes and lateral hinged shoulders (aka butterfly joints). These are really fun to play with and pose. It's been a real treat to see McFarlane Toys embrace articulation over the past few years. 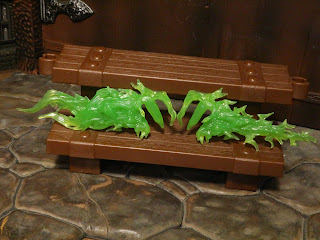 * Malefik Spawn comes with two necroplasm effects which are designed to fit in his hands. I like the green, glowing effect of the plastic and the way the tendrils of necroplasm are sculpted differently. One's a bit more flowy and flame like while the other looks barbed and sharp. Maybe more like lightning? 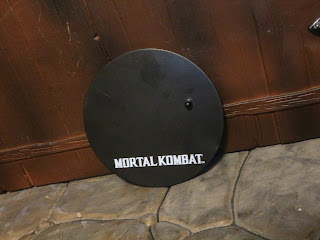 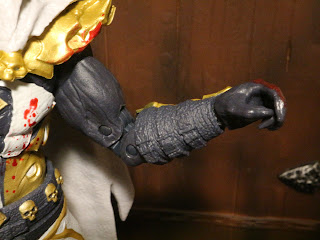 The Negatives:
* Both of the gauntlets have buckles and such on the arm which look like they should be painted. I checked the in-game skin and, yes, there should be paintwork on both of the figures forearms. Looks like these got skipped. 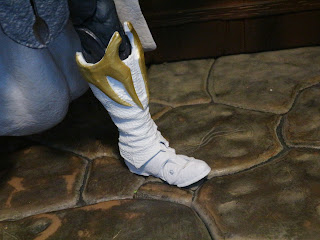 * For some reason the feet look way too small on this guy. Not comically small or anything but definitely small enough that I noticed it and it does make standing up Spawny guy a little tricky without the stand. 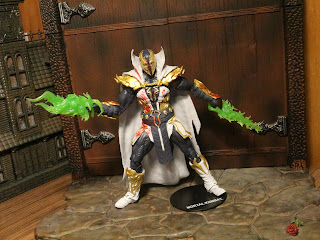 This is a really cool version of Spawn that's definitely worth a look. It's just a darn cool figure with a fantastic paint job and some cool necroplasm blades. The red blood splatter against that white and gold outfit really caught my eye and I'm quite pleased with my impulse purchase. This is a Great and a 1/2 figure that fantastically supplements the ongoing Spawn line as well. I'm not planning to pick up any more of the actual Mortal Kombat characters themselves at this point but I could definitely be down for more versions of Spawn.
Looking for more of Spawn/ Al Simmons? I've also reviewed the movie based Al Simmons, Burnt Spawn, and standard Spawn and the 2022 Mandarin Spawn Deluxe who isn't Al Simmons, but he's still Spawn.
Posted by Barbecue17 at 4/29/2022