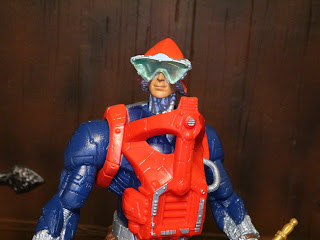 While Mekaneck didn't show up until 1984, the third year of the vintage Masters of the Universe toyline, Mattel slotted him into the second series of the 2002 Masters of the Universe toyline. Released in Fall 2002, Mekaneck not only appeared in the toyline quite early but he was also a mainstay of the accompanying animated series by Mike Young Productions. The 2002/ 200x toyline was mostly designed by the Four Horsemen (Mattel did some of the design, mostly for vehicles, variants, and such, in-house) and they had a lot of freedom to really explore and reimagine the characters from the vintage toyline. Mekaneck is a great example of a figure that takes what made the vintage toy so great (fun concept, cool action feature) and really going further with the design and details. Let's take a look at Mekaneck after the break and see how the Heroic Human Periscope fares in this redesigned line... 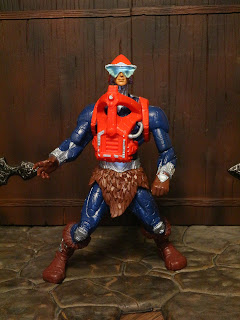 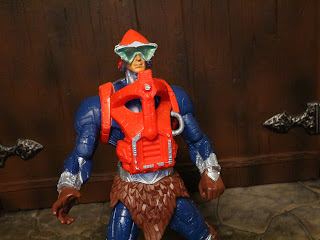 The Positives:
* Mekaneck (real name Orius) definitely looks like his vintage counterpart at a glance: Red and blue color scheme trimmed with silver and a funky helmet with big goggles. Obviously, the proportions of the 200x line are incredibly different than the vintage toy, though, as is the level of detail. While the vintage Mekaneck used a basic body the 200x version is unique with lots of technical detail on Mekaneck's costume and a nicely detailed furry loin cloth. Seriously, look at the effort the Four Horsemen put into something as basic as the furry trunks these guys all wear! 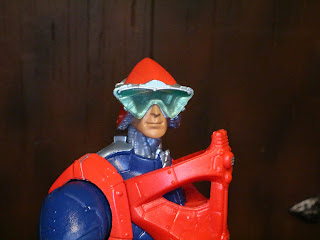 * Mekaneck's helmet is pretty close to the vintage toy's design. He has oversized goggles which here are given a green lens. More on that in a moment! 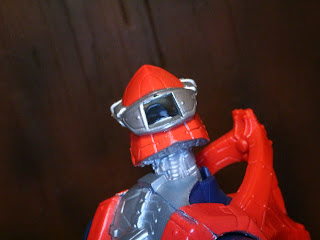 * Mekaneck has a neat little play feature: Look through the back of his helmet and you can see out of his goggles. It doesn't really "do" anything but it's kind of neat nonetheless and definitely invokes the spirit of the vintage toyline. You can also see the technical details on the bottom of Mekeneck's helmet (lots of circuitry and such) which seems to point out that this is more than just a regular helmet with goggles. 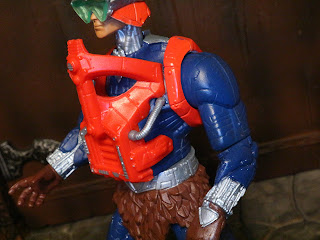 * The front of the armor isn't removable but it does seem to be a separate piece with a separately molded cable running from the armor to Mekaneck's chest. I've always wondered what exactly his armor is supposed to be. Does it allow for him to breathe underwater or in places with ow oxygen levels? Maybe an energy dome forms over this piece and creates a bubble in case he needs to go underwater? 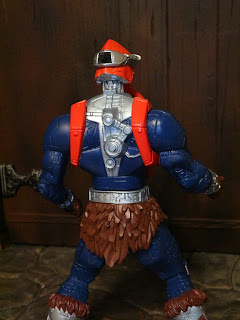 * Flip Mekaneck around and you can see lots of gears and levers that are most likely connected to his extendable neck. While the toy's neck only extends an inch or two, in the show Mekaneck's neck could extend incredibly far. It could bend, too, and be used as a weapon. 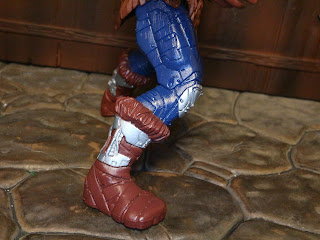 * No plain, furry boots for this guy. Mekaneck even has technology built into his boots while his costume is covered with an intricate pattern and some heavy duty kneepads. He's also got that little chip in his boot that interacts with the Castle Grayskull playset. 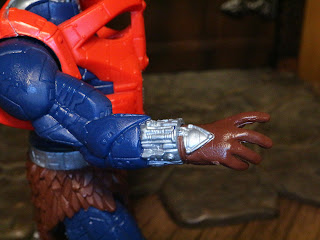 * Check out those gloves! I do miss this period when most toys had unique sculpts and an insane amount of detail. What all gadgetry has Man-At-Arms worked into Mekaneck's gear? 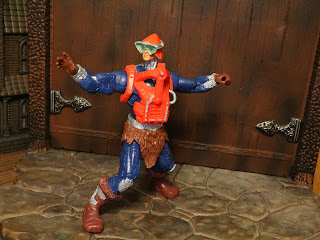 * The 200x MOTU line aren't super articulated but that was kind of the standard at the time. They're dynamically posed figures but the presence of the H-hinged hips, swivel/ hinge shoulders, and the wrist swivels definitely make them still quite fun to play with. They're sturdy as heck, too, and a blast to mess around with. 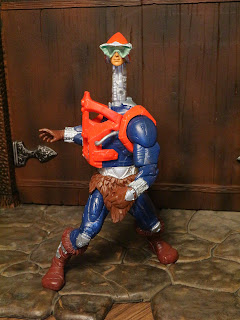 * Mekaneck retains his vintage action feature! Turn his torso to the right and his neck extends an inch or two out of his body. It's pretty detailed and looks really cool. Since you can turn his head you can also have him peeping in any direction you want! 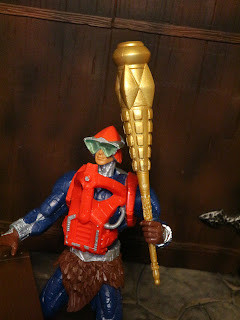 * Mattel also worked a simple battle feature into Mekaneck's left elbow. Pull it back and let it loose so Mekaneck can use his battle club to bash in the brains of anyone who gets in his way. Raw power, baby. Raw. Power. 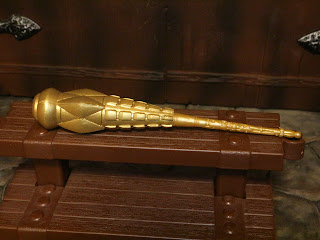 * Speaking of the battle club, here it is! Recently I saw somewhere a collector commenting that the vintage Mekaneck's yello club also seemed to be a telescope. It does kind of look like one, doesn't it? This one doesn't, though. It's clearly a massive techno club designed for bashing the bad guys. It has a very Jack Kibry-esque look to it. I could totally see one of the New Gods carrying this around. 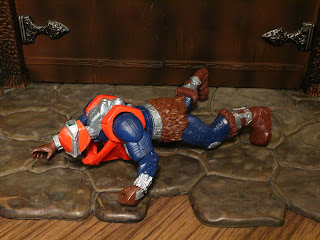 The Negatives:
* Depending on how you have his legs positioned and if he's holding his club Mekaneck can tend to tip forward. You'll have to really work with him to keep him standing up in certain poses. 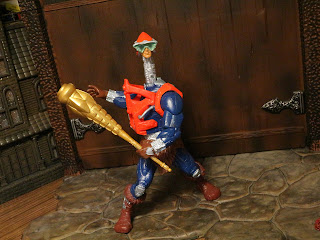 I'm a huge fan of the 200x line and am still impressed by the design and detail of these action figures. The Four Horsemen have always done amazing work but they really put so much effort into this series. This is a fun line and Mekaneck is another very, very solid figure with a cool look and lots of play value. He's an Epic figure and possibly my favorite version of Mekaneck. He might be slightly edged out by the enhanced neck of the Masters of the Universe Classics version, though. An Origins Mekaneck is rumored for the future, too, so Mekaneck may indeed have a bright future. Not bad for a guy Teela liked to pick on in the DC comics.
If you're a Mekaneck fan check out my reviews of the M.U.S.C.L.E. Mekaneck from series 3, Pack D, the NECA micro-bust of Mekaneck, the Mega Construx Mekaneck from the Battle Ram, and the ReAction Mekaneck.
For more reviews from the 2002 Masters of the Universe line check out the following:
He-Man (Comic-Con Exclusive)
Heroes Vs. Villains Gift Pack #1
Keldor
Man-At-Arms
Moss Man
Ram Man
Snake Teela
Trap Jaw
Posted by Barbecue17 at 4/03/2022