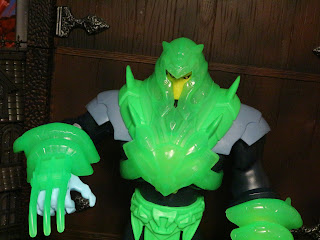 In the vintage Masters of the Universe line Mattel made sure that ever He-Man variant had an accompanying Skeletor variant and, for the most part, Mattel has continued that tradition over the past 40 years. 1984 saw the release of the first vintage He-Man and Skeletor variants, both wearing battle armor with a rotating drum that gave the armor the ability to reflect damage incurred during combat. Battle Armor variants of He-Man and Skeletor have continued to be the most popular MOTU variants and Mattel has included them in the line based on last year's He-Man and the Masters of the Universe CGI animated series. I really like the show (season 2 just dropped last month) but the accompanying toyline has been fairly so-so. Some of the smaller 5 inch figures have been cool but the larger line has left me a bit cold. An 8 1/2 inch Battle Armor He-Man was released last October and back in February Battle Armor Skeletor began showing up in stores to go along with him. Ready to take a look at one of the newest versions of this classic villainous variant? Then join me after the break... 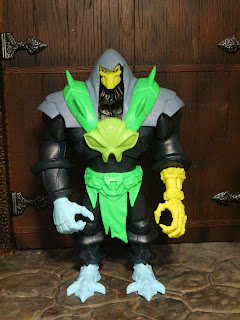 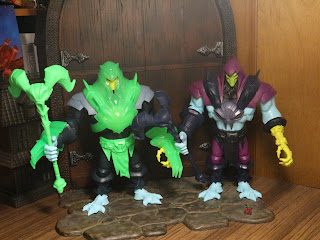 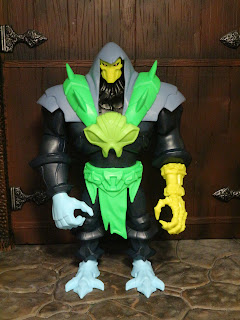 *  I really love the Skeletor design on the show and, like many of the other figures in this line, this figure doesn't do a bad job of replicating the sculpt of it. It's a very stylized toy with a simple paintjob and a clean sculpt. The black, grey, and green paint scheme reminds me of Skeletor variants from the 200x era of MOTU like Mecha-Blade Skeletor, Snake Crusher Skeletor, or Snake Armor Skeletor. This is a very simple look that doesn't capture the excellent CG renders from the cartoon (seriously, I love the look of those character models) but it does have some shelf presence. 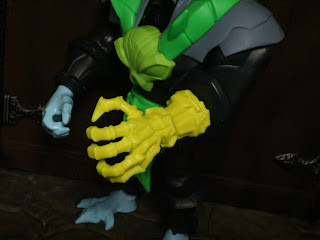 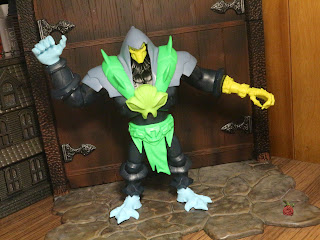 * While the legs are just swivel/hinge joints with swivel ankles, the arms do have much more articulation than the smaller figure do. This Skeletor has swivel/hinge shoulders, a swivel/hinge right elbow, swivel wrists, and now a Power Attack mid-torso, basically a spring loaded balljoint. This line is clearly aimed at kids and Skeletor seems like he could handle some heavy play. My daughter is 8 and is the assistant curator of my Masters of the Universe museum, so she's a toy expert, but one of my friends has a 3 and 4 year old and this guy would be perfect for them. They're rough on stuff. 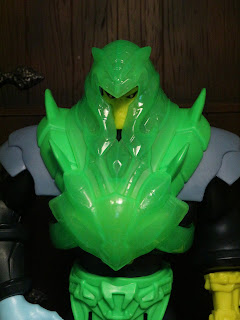 * The Battle Armor on this guy is a translucent green piece that looks very serpent like. It's not a design seen in the show but it definitely fits the aesthetic of the show since Skeletor's Havoc magic is often depicted with green energy. The snake theme definitely seems like something ancient Skeletor has found, perhaps related to the Snake Men (who have been mentioned in the show thus far). It snaps on and stays on well with little risk of popping off mid-play. 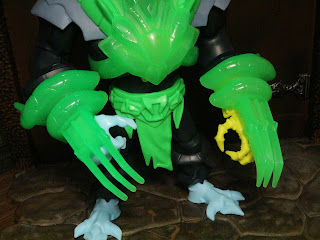 * Skeletor also has some claws which might be a throwback to the Terror Claws variant of Skeletor. They pop on his forearms (it's a little weird how they attach but they do stay on well) and the translucent green blades and coiled serpent tails look pretty cool. 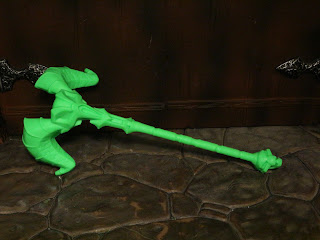 * In He-Man and the Masters of the Universe the Havoc staff is one of two totems once held in Castle Grayskull, though it's cursed as it represents the force of havoc. The sculpt is really nice on the front of this with very pronounced horns on the ram skull and a more wicked looking Graykull-like skull at the bottom of the shaft. It's also now molded in green to match the rest of Skeletor's armor. 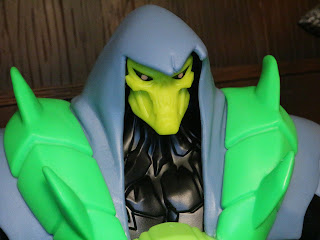 * Like on the previous 8 1/2 inch Skeletor from this line, I like this Skeletor design but the way this is simply just molded in neon green plastic washes away all of the detail. This could have been excellent but Mattel continues to cheap out and it shows here. They just needed to use a little paint, a drybrush effect or a light paint wash to let those details stand out. 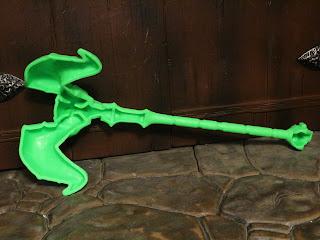 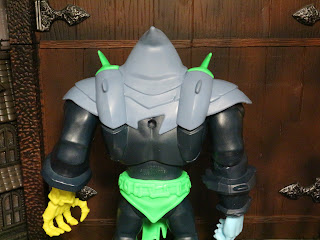 * The back of the figure is largely unpainted, too. The green ram skull armor that is supposed to wrap all around his shoulders? Unpainted. Ugh. 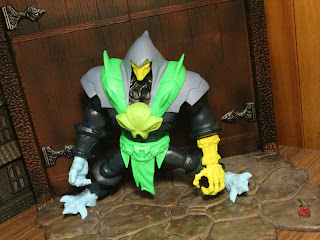 * Skeletor's hips are kind of loose, too. If you don't pose him exactly right he does the splits. Yikes! Again, definitely not made with adult collectors in mind. 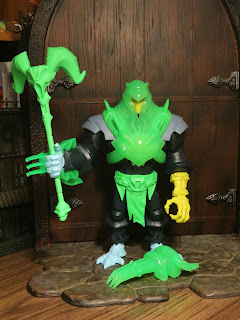 It kind of stinks that we're covering such an Eh and a 1/2 toy for Masters of the Universe month but I wanted to try and cover as wide a variety of interpretations of the vintage 1984/ series 3 characters as possible and since this guy is so new it seemed like the right move. I love the Netflix CG He-Man and the Masters of the Universe, I love the Skeletor character from the show, but I'm not feeling most of these toy interpretations from this line. This one is pretty weak. The design is kind of cool (though heavily stylized) and the armor pieces are neat, but there are so many shortcuts. If you know a young kid who really likes MOTU or the new Netflix series, they probably wouldn't mind these. They're big, bulky, and durable without loose parts. Most collectors can safely skip these, though. While I've been a fan of most MOTU toylines over the years, I'm still not sold on this line. There have been some solid toys (Battle Cat comes to mind) but this isn't one of them.
Posted by Barbecue17 at 4/29/2022