Action Figure Review: Battle for Eternia from He-Man and the Masters of the Universe by Mattel 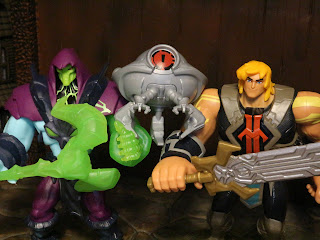 The He-Man and the Masters of the Universe toyline inspired by the Netflix animated series of the same name was exclusive to Walmart in 2021 but now it's available everywhere. What is exclusive to Walmart right now is this Battle for Eternia 2-pack, which includes repaints of the standard He-Man and Skeletor and a RK Unit (which the package refers to as Skeletor's drone). It's a cool little set that easily gives kids and parents a chance to snag He-Man and Skelly in one go. It's been a month or more since I saw a standard He-Man on shelves so this is probably a good idea for a release right now. While it seems that a trend in the toy industry lately has been to overcharge for multipacks, this set gives you both figures at the regular retail price plus throws in one of the RK Units Beastopoid Poacher Drone, the little drones that hang out with Beast Man/ R'Qazz. I absolutely misidentified them at first so Man-E-Thanks to the unknown commenter who let me know. Let's take a look at this fun 2-pack after the break... 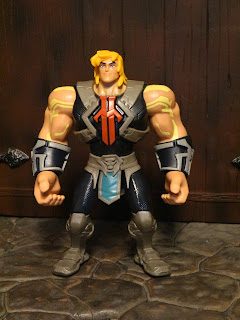 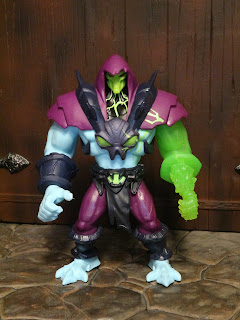 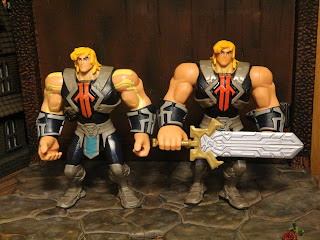 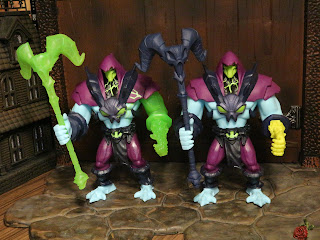 * How about the difference between Chaos Energy Skeletor on the left and the standard Skeletor? The Chaos Energy paint details, the translucent green arm, and the Havoc Staff molded in green. 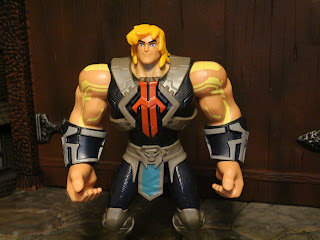 * He-Man looks the same as the previous release with the new energy effects. They do show up in the show and it's kind of cool for a fun little variant. Like the first release, He-Man also feels very sturdy and the Power Attack feature is pretty cool. Essentially, the mid-torso joint is a spring-loaded balljoint. Twist him left or right and his upper torso springs back. Pull his torso back and he springs forward. 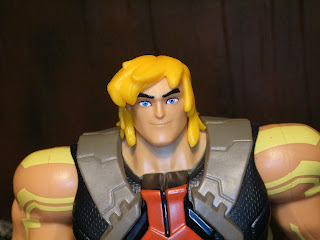 * I'm not 100% sure this is a new face sculpt but it definitely looks a bit better than the first release. Maybe the paint work is just cleaner and sharper? I like it, though I still wish the head was a bit larger. 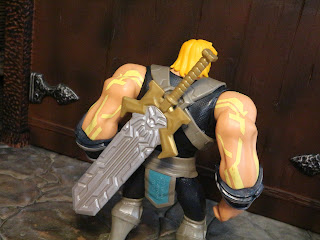 * Master Energy He-Man also comes with the really cool, oversized Sword of Grayskull which can attach to his back. This is the same as the standard figure, so nothing new here but it's still cool. 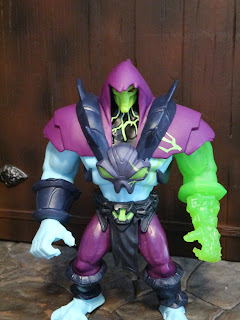 * Chaos Energy Skeletor also is just a repaint of the previous figure but now with more green energy crackles painted on and the translucent green arm. It's a decent sculpt that's fairly stylized and looks pretty cool. I love this Skeletor in the show and while the figure doesn't match his awesomeness, it's still quite good. He's as articulated as He-Man for the most part except for his head. 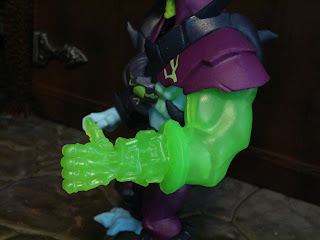 * Here's a close up of Skeletor's Chaos energy arm. It's pretty nifty looking! 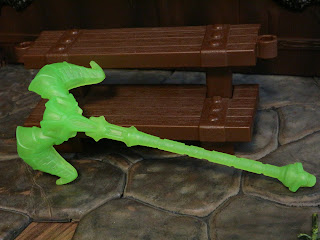 * Skeletor's Havoc Staff is also molded in green plastic as if it's currently overflowing with Chaos energy. 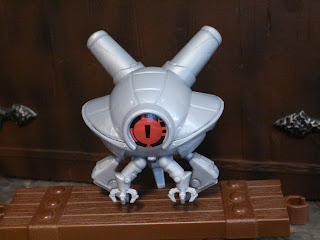 * The real selling point of this set is this RK Unit. These security droids hover around Eternos and show up quite often in the series. This is a standard RK Unit and it's a nice sculpt. Beastopoid Poacher Drone. These guys are used by R'Qazz in the episode where he bothers Cringer and the crew. It's quite large and I love the red and black eye on the front of the droid. 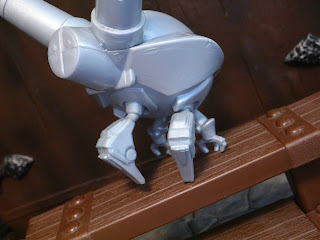 * This drone also has three swiveling legs underneath. Pose him right and you can stand him up next to your figures. 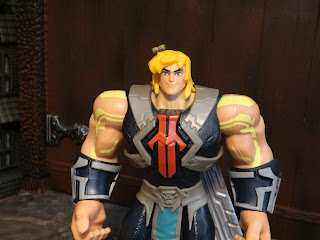 * Any negatives I have with this set are basically negatives shared with the standard releases. I still think the head on this He-Man is too small. It needs to be a bit larger to really look right. 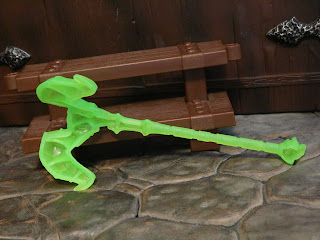 * Skeletor also needs more detail on his face. It seems like a decent sculpt but the detail is all washed out due to being cast in neon green plastic with no details.

* The back of this Havoc Staff is hollow as well, just like the basic figure. It makes it seem a bit cheap. 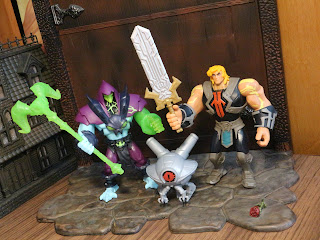 For $20 dollars this set is a really Great gift for any kids you might know who are into action figures. By getting He-Man and Skeletor (a hero and a villain) in one go, you're automatically getting something you can play with. Both figures are basic enough that they're recognizable as the original versions of these characters but the little details like the energy paint on He-Man and Skeletor's Chaos Magic arm do help set them apart from the other figures on the shelf. The poacher drone is cool, too, and I wouldn't mind seeing more of them in the future as pack ins. For the price of two standard figures you're also getting the extra drone, so that's a nice little bonus.